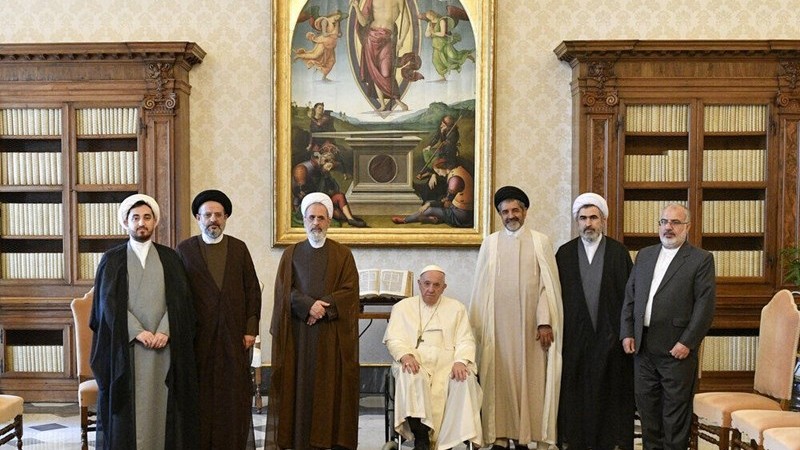 The Director of Iran’s Islamic Seminaries Ayatollah Alireza Aarafi met with Pope Francis on 31 May during a visit to the Vatican, on which he was accompanied by other Iranian officials.

Aarafi carried with him a message to the Pope from Iran’s Supreme Leader, Ayatollah Ali Khamenei, praising his efforts at strengthening the bond between Muslims and Christians.

“We expect you to continue to work to defend the oppressed people of the world, especially in Palestine and Yemen, and to have a clear and transparent stance in that respect,” Aarafi told the Pope.

In turn, the Pope expressed his hope that defending the oppressed of the world will continue and sent his regards to Ayatollah Ali Khamenei.

After a meeting between Pope Francis and Palestinian Authority President Mahmoud Abbas in November last year, the Vatican issued a statement calling for dialogue between Palestinians and Israelis, and emphasizing the need to reach a two-state solution.

Palestinian Christians are subject to continuous discrimination and violence by Israeli forces and extremist settlers.

On 23 April, Israeli forces blocked the roads near the entrance of the Church of the Holy Sepulcher, preventing a large group of Palestinian Christian worshippers from visiting the church in occupied Jerusalem.

In preparation for the Orthodox Easter on 24 April, Palestinian Christian worshippers, seeking to participate in the Holy Fire ceremony on the day before Orthodox Easter, were blocked by Israeli forces, who also assaulted the clergymen.

Speaking to Al Mayadeen, Archbishop Atallah Hanna of the Greek Orthodox Church stated at the time that occupation forces “blatantly encroached on the sanctity of the Church of the Holy Sepulcher, in an unprecedented targeting of Christian presence in the city.”

Christian churches and holy sites are often desecrated in Palestine. In June 2015, Jewish extremists set fire to the Church of the Multiplication of the Loaves and Fish, believed to be the site where Jesus performed some of his miracles.

During a speech on 13 May, Hezbollah leader Sayyed Hassan Nasrallah commented on the killing of renowned Palestinian-American journalist Shireen Abu Aqla, who was also a Christian, and said that the fact that she is a Christian is confirmation that Israel’s discriminatory ideology knows no bounds.

During a speech on 25 May, marking the liberation of south Lebanon from Israeli forces in 2000, Nasrallah warned Israel of “dire consequences” should Muslim or Christian sanctities be targeted in Palestine.