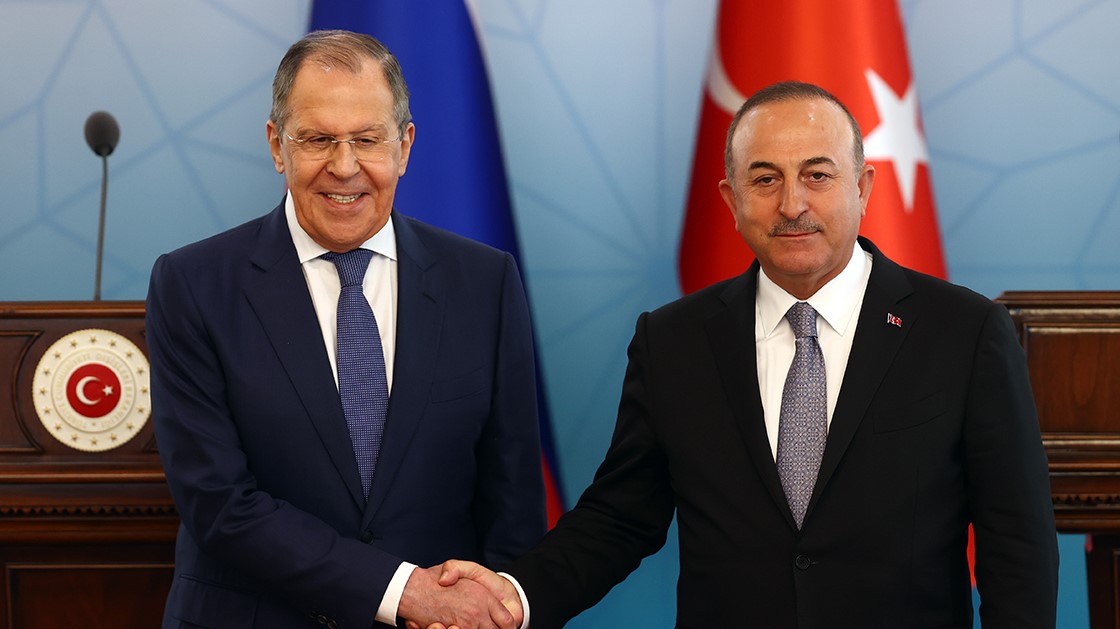 The top diplomats discussed a UN proposal to create a “food corridor” in the Black Sea to allow Ukrainian wheat exports to travel freely and safely.

Russia and Turkey both offered guarantees that they would contribute to the safety of commercial ships during their voyages.

The two ministers declared that the main problem obstructing the safe shipment of grain exports were the mines placed in the sea by Ukrainian forces and Azov Battalion militants.

“We state daily that we’re ready to guarantee the safety of vessels leaving Ukrainian ports and heading for the [Bosphorus] gulf, and we’re ready to do that in cooperation with our Turkish colleagues,” Lavrov said. “To solve the problem, the only thing needed is for the Ukrainians to let vessels out of their ports, either by de-mining or by marking out safe corridors … nothing more is required.”

The two officials declared that the Russian and Turkish navies are ready to contribute to the de-mining process, and that Russia would not use the clearing of mines as a pretext to launch attacks on Ukraine.

The Turkish foreign minister referred to the UN proposal to create a sea corridor for safe passage of commercial ships as “reasonable and feasible.”

Cavusoglu also said that Moscow has legitimate concerns that sanctions on Russia are contributing to the global food crisis. He noted that sanctions are affecting the export of agricultural goods like fertilizer, which further affect the food crisis.

“If the whole world is in need of the products exported by Ukraine and the Russian Federation, then a method needs to be established,” the Turkish official stated, referring to the negotiations between Moscow and Kiev that would need to take place to facilitate de-mining and the establishment of a safe corridor for ships.

Lavrov stated that Russia is ready to enter such talks, but fears that these talks might be symbolic and not lead to a resolution on this critical issue.

Russian President Vladimir Putin, in an interview with Rossiya TV on 3 June, stated that Russia is engaging in the de-mining process.

President Putin has proposed several options for the exportation of Ukrainian grain, one of which involves removing sanctions on Belarus so that grain can ship easily from its ports.

Earlier this year, the Federal Security Service of the Russian Federation stated that Ukraine placed older, Soviet-era mines along its coast on the Black Sea after the start of the Russian special military operation in Ukraine.

Storms have allegedly caused the mines to detach from their anchors and float into the Black Sea, according to the statement.

The discovery of stray mines have caused Turkey to temporarily close the Bosphorus Strait.

The two sides also discussed the situation in Syria, as Ankara expects both Moscow and Washington to abide by their commitments to a 2019 agreement that would see Kurdish militia groups withdraw from the areas surrounding the Syrian-Turkish border.

The Turkish army began a new military campaign in Syria on 25 May, launching an offensive on several villages in the northwestern countryside of Hasakah governorate and the city of Afrin, targeting Kurdish militias, including the Kurdistan Workers Party (PKK) and the SDF.

Erdogan said the operation will resume efforts to establish a 30-kilometer ‘safe zone’ along Turkey’s southern borders, claiming threats from the PKK and YPG.

Russia recently began bombing Turkish-backed rebels in Syria for the first time since the start of the war, with airstrikes on the Syrian–Turkish border on 27 May and on the Aleppo countryside on 29 May.

Turkey is claiming that Syrian and Russian forces are allegedly bolstering their troop presence in northern Syria in anticipation of further expansion of the Turkish invasion of Syria.