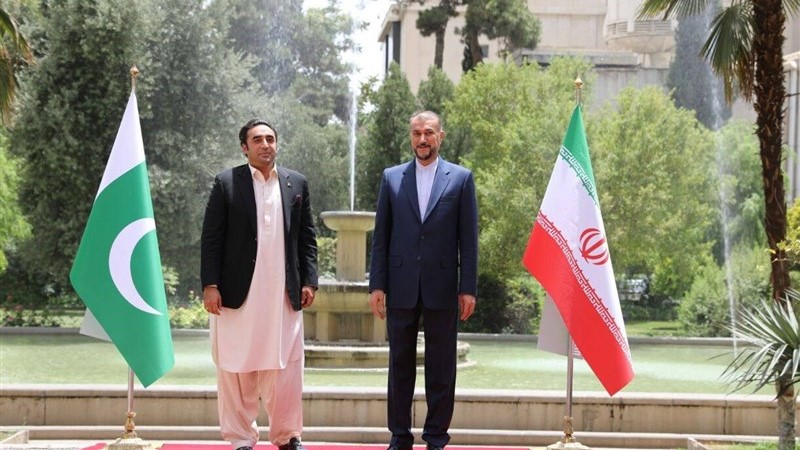 Afghanistan was one of many topics addressed at the joint press conference of Iranian Foreign Minister Hossein Amir-Abdollahian and his Pakistani counterpart Bilawal Bhutto Zardari during the visit of Zardari to Tehran on 14 June.

Amir-Abdollahian was clear in saying that Iran maintains ties with the interim governing body of Afghanistan simply because they share a common border, and highlighted the need for the Taliban to form an inclusive government with the participation of all ethnicities as the only solution to the crisis in Afghanistan.

Zardari also discussed the various problems facing Afghanistan, saying that Afghans need to access their assets, in reference to the part of Afghanistan’s sovereign wealth held up in foreign reserves, and unilaterally seized by the US in August 2021.

The Pakistani official noted that both Iran and Pakistan have hosted millions of Afghan refugees over nearly 40 years.

Following the dissolution of the Taliban in the 2000s, Iran’s Islamic Revolutionary Guard Corps (IRGC) forged ties with the more moderate factions of the Taliban.

These factions make up the current Taliban leadership, which has led many to hope that pledges by the Taliban to uphold the rights of religious minorities and women would be implemented.

However, the factions of the Taliban which represent the old leadership are still present among the ranks of the organization, triggering infighting over the type of governance that Afghan people would most benefit from.

Iran and China have also made it clear they will monitor the Taliban’s adherence to these pledges as a condition for partnership, including in China’s Belt and Road Initiative.

The statement by the Iranian foreign minister is a reminder to the interim Afghan government of the need to adhere to pledges expected by their Asian partners when forming a permanent government.

Amir-Abdollahian also addressed the attempts to revive the 2015 Iran nuclear deal, in an emphasis that Tehran is keen on remaining at the negotiating table.

“We will not end the dialogue, but we will increase our nuclear activities,” the Iranian official declared.

Amir-Abdollahian slammed the US-led resolution against Iran at the International Atomic Energy Agency (IAEA), stating that the US issued the measure in an attempt to pressure Iran into sacrificing some of its core issues at the negotiating table.

The IAEA included some of the elements of the original US resolution in the final draft that was ratified by the UN nuclear watchdog, and which accused Iran of allegedly failing to cooperate with the nuclear organization.

Iran has accused the IAEA of being politically compromised by Israel, following the visit of the IAEA chief to Tel Aviv on 3 June. Israel has several hundred semi-secret nuclear weapons as part of a nuclear program which is not subject to inspections.

In response to the IAEA resolution, the Islamic Republic increased their nuclear activities incrementally. The Iranian foreign ministry described the countermeasures as “decisive and appropriate.”

Iran also disconnected several IAEA cameras at various nuclear facilities across the country as a countermeasure.

“The Islamic Republic of Iran took retaliatory action by revving up its nuclear activities,” stated Amir-Abdollahian in reference to the countermeasures.

The two sides discussed the need for a diplomatic resolution to the war against Yemen and the war in Ukraine, and for the Muslim world to unite in support of ending the Israeli occupation of Palestine.