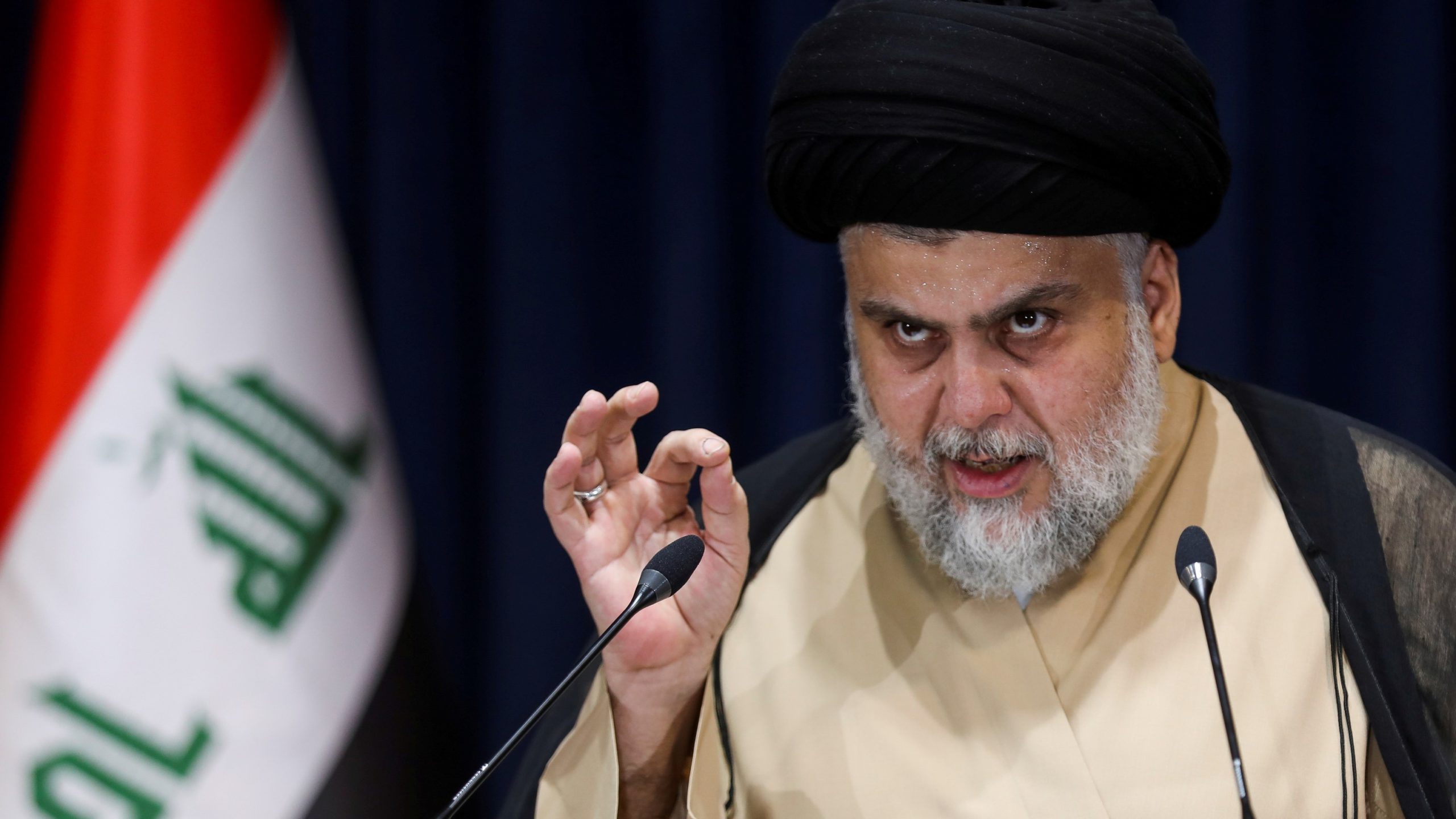 State media reported that Al-Sadr wants to step away from politics to avoid associating with “corrupt” politicians.

This leaves the political situation in Iraq with further uncertainty after eight months of failure to form a new government following recent elections.

The elections were subject to controversy, with allegations of meddling by the US and Gulf Cooperation Council (GCC) member states.

The vacant seats will be filled by runner-up election candidates, altering the power balance in parliament, and allowing negotiations for government formation to operate under different power dynamics.

In mid-May, Al-Sadr announced his party had “no choice but to join the opposition for at least 30 days,” marking the second time his bloc stepped aside from negotiations to form a government.

In early April, Al-Sadr opened the door for the Coordination Framework (CF) to lead the negotiations.

The CF is an ad hoc group of Shia parties with close ties to the Popular Mobilization Units (PMU), including the State of Law Coalition and the Fatah Alliance. These parties lost by a large margin to the Sadrist bloc last year, with many alleging fraud in the results.

Al-Sadr is aligned with the Sunni Muslim Sovereignty Alliance and the KDP, both of which oppose the CF.

The deadline for the Iraqi parliament to elect a new president passed in early April, as a result of several boycotts of the sessions summoned by Al-Sadr.

On 4 May, the CF issued a proposal to form a new government, saying that the new Iraqi prime minister should be elected by all Shia political groups, rather than only by the Sadrist Movement.

Following the mass resignation of Sadrist lawmakers, CF leader Ali al-Fatlawi told Shafaq News that the group had convened in the offices of Hadi al-Ameri, the head of Fatah Alliance.

Other CF members have called the decision by Al-Sadr a “political maneuver.”

“A political maneuver is the only rational explanation of this decision. Al-Sadr sought to inject a fresh momentum into an otherwise static situation,” member of the State of Law Coalition, Thaer Makhif, said.

Last month, the UN envoy to Iraq, Jeanine Hennis-Plasschaert, warned that the streets of Iraq “will boil over” if the political crisis is not resolved.

Keywords
electionsGCCHashd al-ShaabiIraqIraq electionsIraqi governmentMuqtada al-SadrPMUSadrist blocUS
More news
Iranian prosecutor general indicates suspension of ‘morality police’
Dec 04, 2022
Israeli jets bombard Gaza in response to Palestinian rocket fire
Dec 04, 2022
OPEC+ to stick to oil output reduction
Dec 03, 2022
Turkiye: US, Russia failed to clear Kurdish separatists from border
Dec 03, 2022
PreviousNext
Iranian prosecutor general indicates suspension of ‘morality police’
While Montazeri confirmed that operations of the morality police are currently over, there is no indication that they have been permanently dissolved
Dec 04, 2022
Israeli jets bombard Gaza in response to Palestinian rocket fire
The missile attacks were reportedly launched in retaliation to the execution of an unarmed Palestinian man by an Israeli soldier in the West Bank a day earlier
Dec 04, 2022
OPEC+ to stick to oil output reduction
Washington's most senior energy, economic, and foreign policy officials were tasked with lobbying Kuwait, Saudi Arabia, and the UAE to vote against the proposed output cuts
Dec 03, 2022
Turkiye: US, Russia failed to clear Kurdish separatists from border
Turkey has carried out a series of incursions into Syria since 2016 and already controls parts of northern Syria
Dec 03, 2022
Turkiye jails extradited PKK member from Sweden
The suspected Kurdistan Workers' Party member was immediately arrested upon his arrival at Istanbul airport
Dec 03, 2022
Iranian tanker formerly impounded by Greece docks in Syria
The arrival of the Iranian fuel at the port of Baniyas comes as Syria faces severe energy shortages
Dec 03, 2022
Neo-fascist Christian militia takes to the streets in Lebanese capital: Report
Lebanon's new right wing Christian militia boasts members that took part in last year's shooting of Hezbollah and Amal supporters in the Tayouneh neighborhood of Beirut
Dec 03, 2022
Iraq dismisses border guards commander to quell tensions with Iran and Turkey
Baghdad will form a joint committee with the leadership from the semi-autonomous Kurdish region to coordinate with Iran and Turkey an end to recent border tensions
Dec 03, 2022
Qatar pressures Hamas to avoid military escalation in Gaza until World Cup ends: Report
The reported pressure from Doha, however, has no bearing on the activities of the PIJ, another Gaza-based resistance faction with deep ties in the West Bank
Dec 03, 2022
UAE to disburse $817 million in housing support for citizens
The UAE president earlier waived off over $146 million of debts for 1,214 Emirati citizens
Dec 02, 2022
PreviousNext
Most Popular
US-Turkiye brinkmanship won’t reach a point of no return
BY MK Bhadrakumar Nov 28, 2022
The role of UK intelligence services in the abduction, murder of James Foley
BY William Van Wagenen Nov 25, 2022
A war of narratives: Who killed the child in Iran’s Izeh?
BY Fereshteh Sadeghi Nov 23, 2022
Pentagon fails to pass new financial audit, unable to account for over $2 trillion in assets
Nov 23, 2022
Israel, US to conduct air drill simulating attack on Iran
Nov 28, 2022