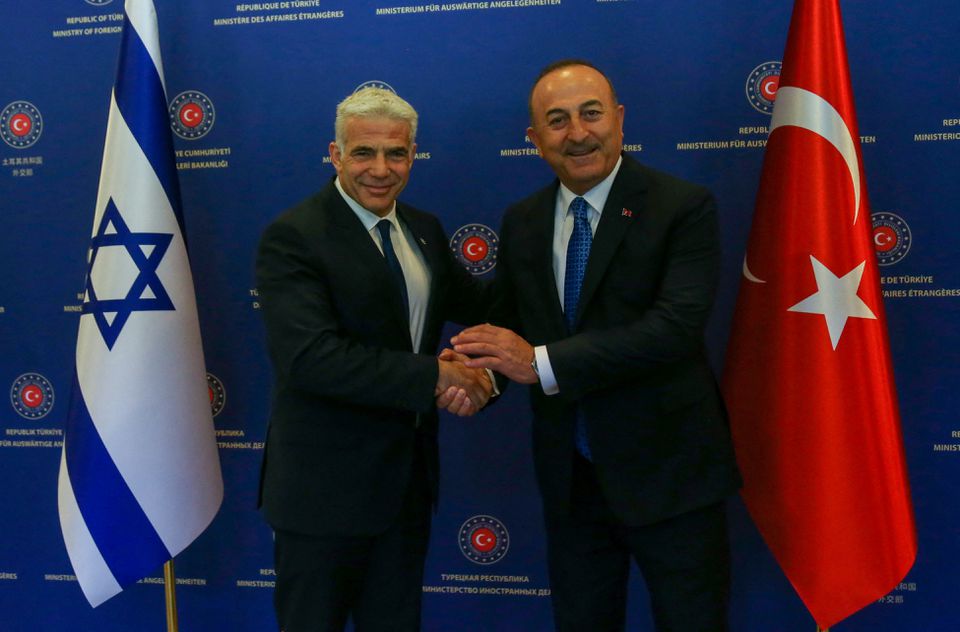 Turkey and Israel have embarked on the restoration of diplomatic representation at the “ambassador level,” according to Turkish Foreign Minister Mevlut Cavusoglu.

Tel Aviv and Ankara expelled their ambassadorial counterparts in 2018 over Israel’s brutal treatment of Palestinian citizens. In recent months, energy has emerged as a key for potential cooperation between the two, following years of strained ties.

“We will continue the high-level mutual visits in the short term,” Cavusoglu said, during a joint news conference with his Israeli counterpart Yair Lapid.

“We have launched work on raising our diplomatic representation to ambassador level,” Lapid went on to say.

Lapid visited Ankara on 23 June amid concerns by Tel Aviv that its citizens could potentially come under attack by Iran in Turkey.

Lapid thanked the Turkish administration for assisting them in foiling an alleged Tehran plot to harm Israeli citizens in Istanbul.

Iranian foreign ministry spokesman, Saeed Khatibzadeh, responded to the allegations made by Yapid in Ankara, describing them as “baseless allegations used to destroy relations between Turkey and Iran.”

Khatibzadeh added: “Our neighbor Turkey is well aware of the allegations made by the lying Zionist terrorist regime and is not expected to remain silent in the face of these divisive allegations.”

Despite Turkey and Israel being in the process of mending ties, the Turkish public continues to support the Palestinian cause.

During the past year, Ankara has been working to repair relations with a number of regional rivals, such as Saudi Arabia, the UAE, and Egypt. At the same time, Turkey has also moved to normalize ties with Israel.

Energy cooperation is of particular interest to both nations, specifically, the potential to transport Israeli gas from Turkey to Europe amid a severe energy crisis caused by western sanctions imposed on Russia.

Turkish media reports anticipate that the issue of energy cooperation in the Eastern Mediterranean, which is at the center of relations between the two countries, will be on the table during the meeting between Lapid and Cavusoglu.

Then, in 2018, efforts to rebuild ties failed after dozens of Palestinian protesters were killed by Israel.

Keywords
diplomatic representationenergy agreementsIranIsraeli-Palestinian conflictMevlut CavusogluPalestineSaeed KhatibzadehSaudi ArabiaTurkeyUAE
More news
UAE invites Ben-Gvir to National Day reception
Dec 01, 2022
Iran, Iraq conclude contracts worth $4 billion in technology, engineering
Dec 01, 2022
47 intelligence agencies waging “hybrid warfare” against Iran: Report
Dec 01, 2022
Turkish airstrikes decimate Syrian energy facilities: Oil Minister
Dec 01, 2022
PreviousNext
UAE invites Ben-Gvir to National Day reception
The diplomatic relationship and bilateral cooperation and trade significantly improved between Israel and the UAE since the signing of the Abraham Accords
Dec 01, 2022
Iran, Iraq conclude contracts worth $4 billion in technology, engineering
Iranian exports to Iraq are expected to increase to $9 billion in the coming months, despite Iran's security concerns over Kurdish separatist groups in Iraq
Dec 01, 2022
47 intelligence agencies waging “hybrid warfare” against Iran: Report
According to Tehran, security forces have not yet resorted to the use of live ammunition against protesters and rioters
Dec 01, 2022
Turkish airstrikes decimate Syrian energy facilities: Oil Minister
The strikes have also worsened northern Syria’s water crisis, as a number of water pumps and desalination plants have been halted
Dec 01, 2022
Saudi Arabia inks arms deal with Spain to strengthen naval forces
Riyadh has increased its efforts in cooperation with nations across the globe as Saudi leaders look to move away from the kingdom's US dependency
Dec 01, 2022
Lebanese parliament again fails to elect president, pushing nation deeper into crisis
As Lebanon sinks deeper into crisis, US officials have said that once the 'complete disintegration of the state' happens, Lebanon can be 'rebuilt from the ashes, freed from the curse of Hezbollah'
Dec 01, 2022
US war chief warns Turkiye against launching ground offensive in Syria
The warning by Lloyd Austin came hours after Ankara deployed reinforcements to the border with Syria
Dec 01, 2022
Russia reinforces military presence in northern Syria
Moscow has been mediating talks between Damascus and the Kurdish groups present on the border with Turkiye
Dec 01, 2022
Turkiye dispatches new military reinforcements to Syrian border
Turkiye demands a complete withdrawal of the SDF from Manbij, Kobani, and Tal Rifaat
Nov 30, 2022
US, Oman discuss political solution for Yemen
The meetings of the US and UN envoys come as part of a continued international effort to extend the six-month truce
Nov 30, 2022
PreviousNext
Most Popular
US-Turkiye brinkmanship won’t reach a point of no return
BY MK Bhadrakumar Nov 28, 2022
The role of UK intelligence services in the abduction, murder of James Foley
BY William Van Wagenen Nov 25, 2022
A war of narratives: Who killed the child in Iran’s Izeh?
BY Fereshteh Sadeghi Nov 23, 2022
Pentagon fails to pass new financial audit, unable to account for over $2 trillion in assets
Nov 23, 2022
Israel, US to conduct air drill simulating attack on Iran
Nov 28, 2022