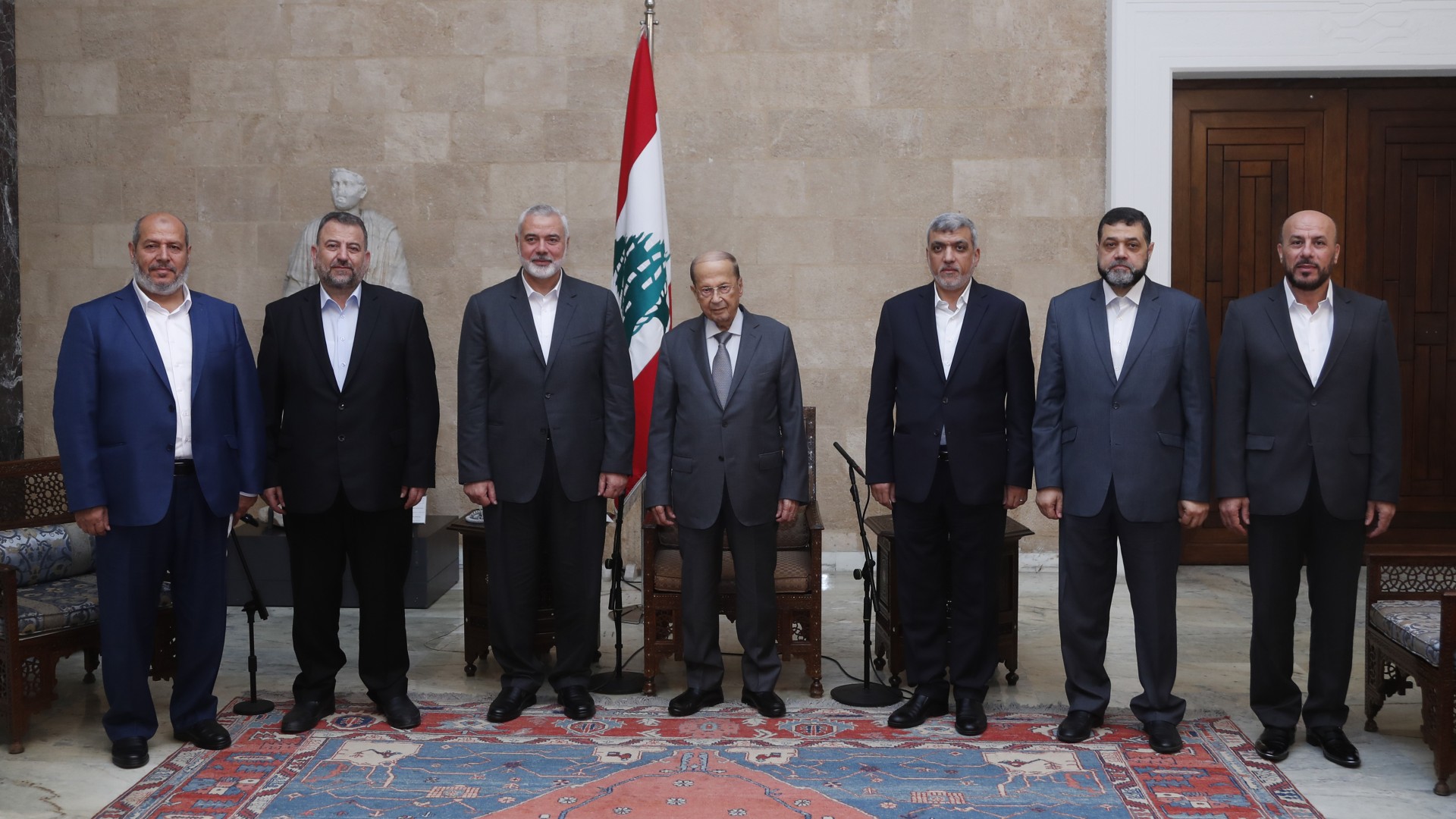 Lebanese President Michel Aoun has affirmed Lebanon’s support for the right of Palestinian people to return to Palestine and the establishment of an independent state in their homeland during a meeting between the president and the head of the political wing of Hamas, Ismail Haniyeh, in Beirut on 24 June.

Over the course of the meeting, Aoun emphasized the importance of protecting Jerusalem from Israeli aggression, saying that the holy city is highly significant to three main religions, Islam, Christianity and Judaism.

“No one can imagine Jerusalem without the Church of the Holy Sepulcher, or its other holy sites,” Aoun said.

The Lebanese President also stated that the Palestinian people’s resistance against Israeli occupation “is not terrorism”.

Haniyeh updated Aoun on the situation in Jerusalem and in Palestine in general, specifically regarding the expansion of illegal Israeli settlements and the constant storming of Al-Aqsa Mosque by occupation troops and settlers.

The Hamas official also congratulated Aoun on the outcome of Lebanon’s latest elections, while firmly condemning Israel’s violation of the negotiations regarding the maritime border dispute between Beirut and Tel Aviv, speaking out against the open Israeli attempt to loot Lebanon’s natural resources.

“We affirm our full solidarity with Lebanon in the face of Israeli threats on Lebanese–Palestinian maritime borders … the hands of this occupation have no right to extend to any Arab country,” Haniyeh said in a statement after the meeting.

On 5 June, a European gas extraction vessel docked in Lebanese waters to drill for natural gas in the Karish field on behalf of Israel, a direct violation of ongoing maritime border negotiations.

Keywords
al-Aqsa MosqueHamasHezbollahillegal settlementsIsraelKarish gas fieldLebanonmaritime borderMichel AounPalestine
More news
Syrian Kurds halt operation against ISIS
Nov 26, 2022
US mediating between Ankara-SDF to prevent ground offensive: Report
Nov 26, 2022
US base comes under missile attack in northern Syria
Nov 26, 2022
Pakistan invites Turkey to join economic corridor with China
Nov 26, 2022
PreviousNext
Syrian Kurds halt operation against ISIS
General Mazloum Abdi blamed the US for not having done enough to stop the Turkish cross-border operations in Syria
Nov 26, 2022
US mediating between Ankara-SDF to prevent ground offensive: Report
According to a Kurdish media report, Ankara has asked for a cut of the oil revenues from SDF-controlled areas as a condition for withdrawing from plans of a ground invasion
Nov 26, 2022
US base comes under missile attack in northern Syria
Local tribes have increasingly become more dissatisfied with the presence of illegal US troops in the region, which is centered around plundering natural resources
Nov 26, 2022
Pakistan invites Turkey to join economic corridor with China
Pakistan and Turkey consider their economic and military cooperation a cornerstone of deterrence against foreign enemies
Nov 26, 2022
Qatar reconsiders London investments in wake of grandstanding ban over ‘LGBT+ concerns’
Qatar has invested an estimated $40bn in the UK, owning British landmarks like Harrods, the Shard building, Chelsea Barracks, as well as a 20 percent stake in Heathrow airport
Nov 26, 2022
US offers support to Iraq in confronting threats to Kurdistan region
Iran accuses the Kurdish region of Iraq of harboring the masterminds of violent unrest in the country, while Turkey blames Kurdish militias based out of northern Iraq and Syria for a terror attack in Istanbul
Nov 26, 2022
Azeri president denounces France’s position on peace talks with Armenia
The French Senate called for sanctions on Baku, as Paris recognizes the Republic of Nagorno-Karabakh, and is urging Azerbaijan to withdraw from Armenian territory
Nov 25, 2022
Turkey in final stages of talks for up to $10bn funding from Qatar: Report
One of the officials said the total funding could take the form of a swap, Eurobond or other method
Nov 25, 2022
Government formation talks in Israel to allow for ‘soft annexation’ of West Bank
Benjamin Netanyahu has reportedly agreed to allow Israel's leading supremacist group control of the occupied West Bank
Nov 25, 2022
UAE disguises new military base in Yemen as civilian airport
The new military airport, which has replaced a former Emirati base in Eritrea, will serve as a logistical supply hub
Nov 25, 2022
PreviousNext
Most Popular
No pain, no grain: Putin’s Black Sea comeback
BY Pepe Escobar Nov 02, 2022
The Huseynyun: Iran’s challenge in forming a ‘Hezbollah of the Caucasus’
BY Yeghia Tashjian Nov 04, 2022
Switzerland finds no reason to label Hezbollah a terrorist organization
Nov 05, 2022
Imran Khan shot in apparent assassination attempt
Nov 03, 2022
The Gray Wolf returns to Central Asia: Turkey’s ambitions for the region
BY Erman Çete Nov 01, 2022