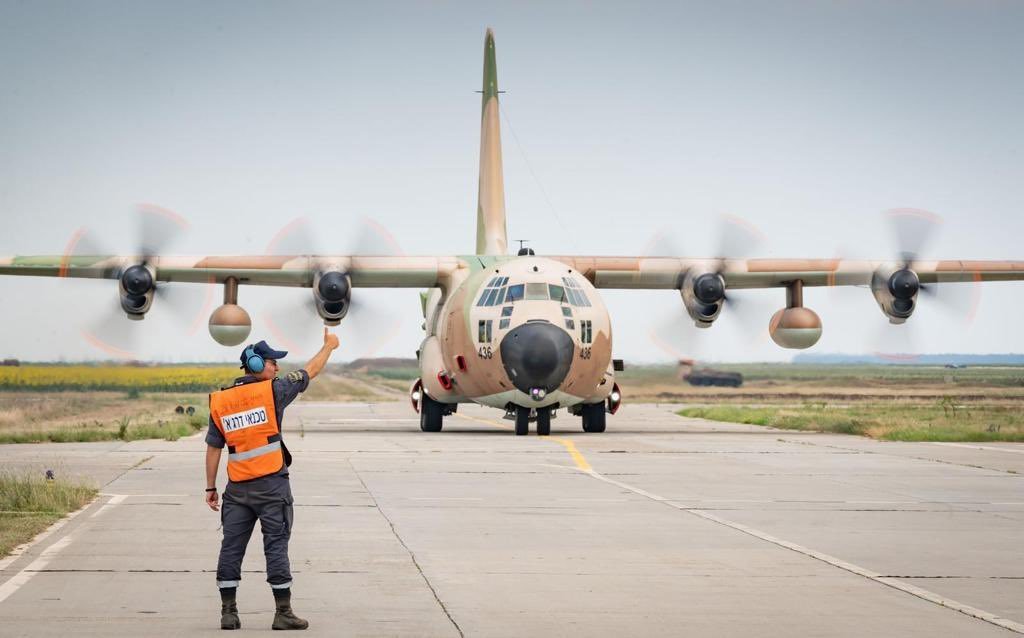 Lockheed Martin C-130 Hercules and C-130J Super Hercules transport planes will participate in the ‘Blue Sky 2022’ drill, which is aimed at training pilots to navigate and land in unfamiliar areas simulating enemy territory.

Additionally, the drill is aimed at training pilots to simulate landing behind enemy lines during war.

“Training in the skies of Romania is an opportunity for us to challenge ourselves, to improve and become stronger, beyond the borders of Israel,” said the commander of the Nevatim Air Base, Brigadier-General Gilad Keinan.

Similar drills were carried out over the years, with one of the most notable taking place in 2010, but was interrupted by the crash of an IAF Yasur (CH-53 Sea Stallion) helicopter.

Six Israeli soldiers and one Romanian were killed during a maneuver in the Carpathian mountains at ‘Blue Sky 2010’.

The Israeli Air Force is participating in the “Blue Sky” aerial exercise in Romania.

Together, we will simulate various scenarios to strengthen the operational competence of the IAF and its servicemembers. 🇮🇱🤝🇷🇴 pic.twitter.com/KoXGxqjAuW

However, despite the the lack of recent operational use of the paratroopers brigade in air landing tasks, or utilizing transport planes in air drops, the Israeli army is displaying a shift in its mentality.

In the recent ‘Chariots of Fire’ drill, the Israeli military deployed in Cyprus as part of a training to simulate moving a large force into enemy territory.

During the drill, the Israeli soldiers trained on how to operate in Lebanese cities by deploying from both air and sea.

The drill focused on ways to support an occupation force, uninterrupted, through different means over a long period.

IDF combat forces back in Israel after large war exercise in Cyprus pic.twitter.com/NwzPSos5Za

These drills emphasize the new doctrine followed by the Israeli decision makers and their newfound will to commit troops in a land battle against Hezbollah during a multi-front war.

Past reluctance to end the threat posed by Hezbollah and Hamas through a ground invasion have cost Israel its deterrence against two non-state actors.