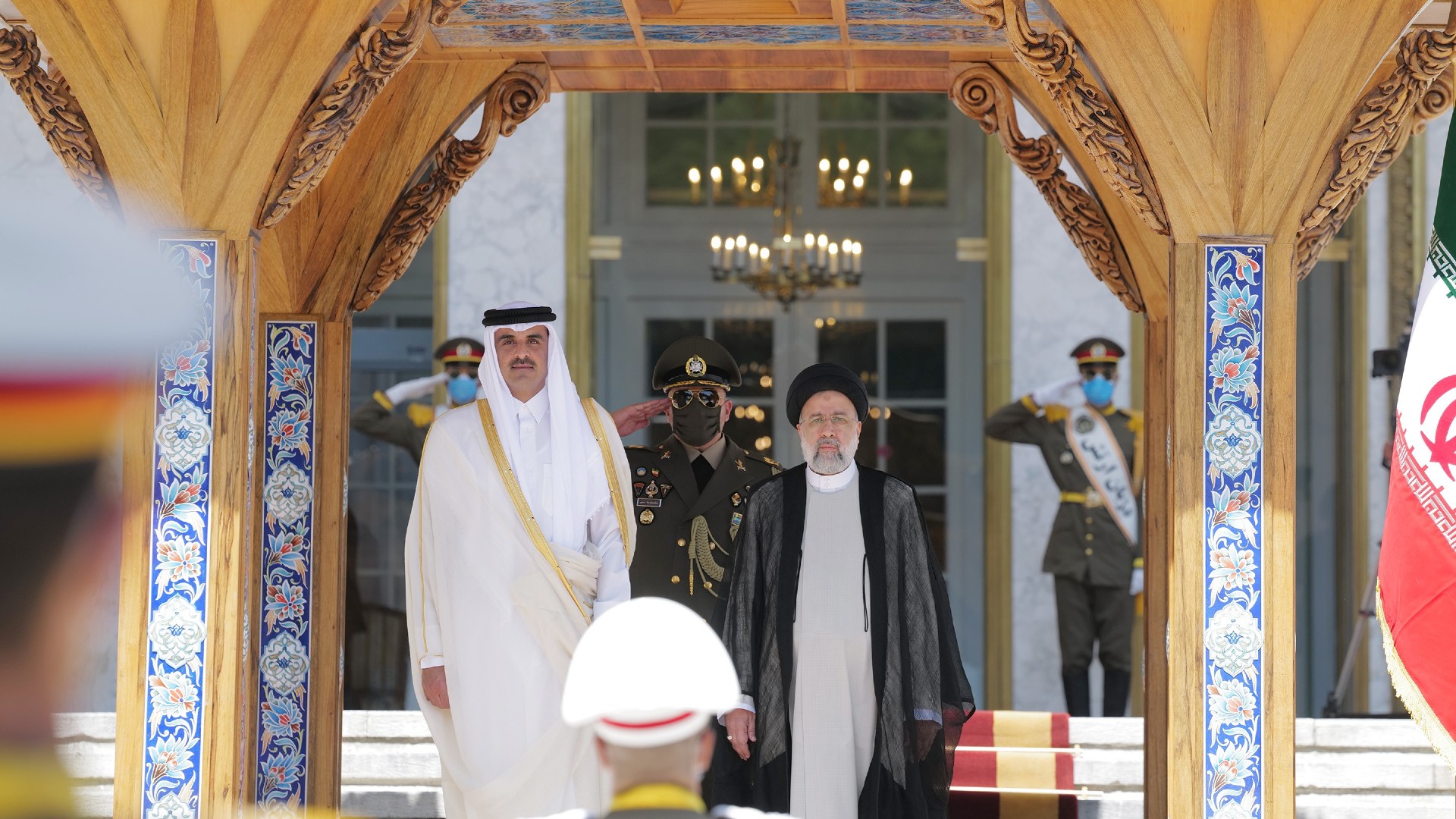 The two leaders referenced the intensive diplomatic consultations and meetings between officials over recent months, with Raisi saying that “these meetings and consultations have a positive effect on the process of implementing agreements between our two countries.”

The Qatari emir said he hoped the blessings of the Islamic Eid will benefit the two nations, and expressed satisfaction over the bilateral relations and the rapid implementation of agreements.

Qatar had recently hosted two days of indirect talks between the US and Iran, with the EU conducting shuttle diplomacy.

According to western reports, the Doha talks concluded without progress, but Iran was suggesting otherwise. As of now, no further negotiations have been scheduled.

The two ministers held a press conference after the Doha talks, where Amir-Abdollahian countered US claims attributing the failure of nuclear talks in Doha to Iran.

“Despite some media claims by the American side, we have no claims that go beyond the Joint Comprehensive Plan of Action (JCPOA),” Iranian foreign minister said, adding that Tehran is ready to proceed with the talks.

Amir-Abdollahian emphasized Tehran’s demand for an “effective guarantee” by the US in relation to their promises in the original deal.

The Qatari foreign minister reiterated Doha’s support for the restoration of the JCPOA, and for frequent regional talks between Iran and their neighbors.

One month prior, the Emir of Qatar met with Iranian Supreme Leader Ayatollah Ali Khamenei and President Raisi on 12 May, for talks on bilateral and regional issues, and on the revival of sanctions-removal talks between Iran and western powers.

Talks on sanctions removal were suspended in March after the US seized two Iranian oil cargo ships that Washington claimed were violating sanctions.

Hours later, following the announcement of the suspension, the Iranian delegation left Vienna.

Despite efforts to revive the talks, areas of disagreement remain, including the US refusal to remove the Iranian Revolutionary Guard Corps (IRGC) from their list of foreign terrorist organizations.

Keywords
Ayatollah Ali KhameneiEbrahim RaisiHossein Amir-AbdollahianIRGCJCPOAMohammad bin Abdulrahman al-ThaniQatarsanction removal talksSheikh Tamim bin Hamad Al Thani
More news
Iranian prosecutor general indicates suspension of ‘morality police’
Dec 04, 2022
Israeli jets bombard Gaza in response to Palestinian rocket fire
Dec 04, 2022
OPEC+ to stick to oil output reduction
Dec 03, 2022
Turkiye: US, Russia failed to clear Kurdish separatists from border
Dec 03, 2022
PreviousNext
Iranian prosecutor general indicates suspension of ‘morality police’
While Montazeri confirmed that operations of the morality police are currently over, there is no indication that they have been permanently dissolved
Dec 04, 2022
Israeli jets bombard Gaza in response to Palestinian rocket fire
The missile attacks were reportedly launched in retaliation to the execution of an unarmed Palestinian man by an Israeli soldier in the West Bank a day earlier
Dec 04, 2022
OPEC+ to stick to oil output reduction
Washington's most senior energy, economic, and foreign policy officials were tasked with lobbying Kuwait, Saudi Arabia, and the UAE to vote against the proposed output cuts
Dec 03, 2022
Turkiye: US, Russia failed to clear Kurdish separatists from border
Turkey has carried out a series of incursions into Syria since 2016 and already controls parts of northern Syria
Dec 03, 2022
Turkiye jails extradited PKK member from Sweden
The suspected Kurdistan Workers' Party member was immediately arrested upon his arrival at Istanbul airport
Dec 03, 2022
Iranian tanker formerly impounded by Greece docks in Syria
The arrival of the Iranian fuel at the port of Baniyas comes as Syria faces severe energy shortages
Dec 03, 2022
Neo-fascist Christian militia takes to the streets in Lebanese capital: Report
Lebanon's new right wing Christian militia boasts members that took part in last year's shooting of Hezbollah and Amal supporters in the Tayouneh neighborhood of Beirut
Dec 03, 2022
Iraq dismisses border guards commander to quell tensions with Iran and Turkey
Baghdad will form a joint committee with the leadership from the semi-autonomous Kurdish region to coordinate with Iran and Turkey an end to recent border tensions
Dec 03, 2022
Qatar pressures Hamas to avoid military escalation in Gaza until World Cup ends: Report
The reported pressure from Doha, however, has no bearing on the activities of the PIJ, another Gaza-based resistance faction with deep ties in the West Bank
Dec 03, 2022
UAE to disburse $817 million in housing support for citizens
The UAE president earlier waived off over $146 million of debts for 1,214 Emirati citizens
Dec 02, 2022
PreviousNext
Most Popular
US-Turkiye brinkmanship won’t reach a point of no return
BY MK Bhadrakumar Nov 28, 2022
The role of UK intelligence services in the abduction, murder of James Foley
BY William Van Wagenen Nov 25, 2022
A war of narratives: Who killed the child in Iran’s Izeh?
BY Fereshteh Sadeghi Nov 23, 2022
Pentagon fails to pass new financial audit, unable to account for over $2 trillion in assets
Nov 23, 2022
Israel, US to conduct air drill simulating attack on Iran
Nov 28, 2022