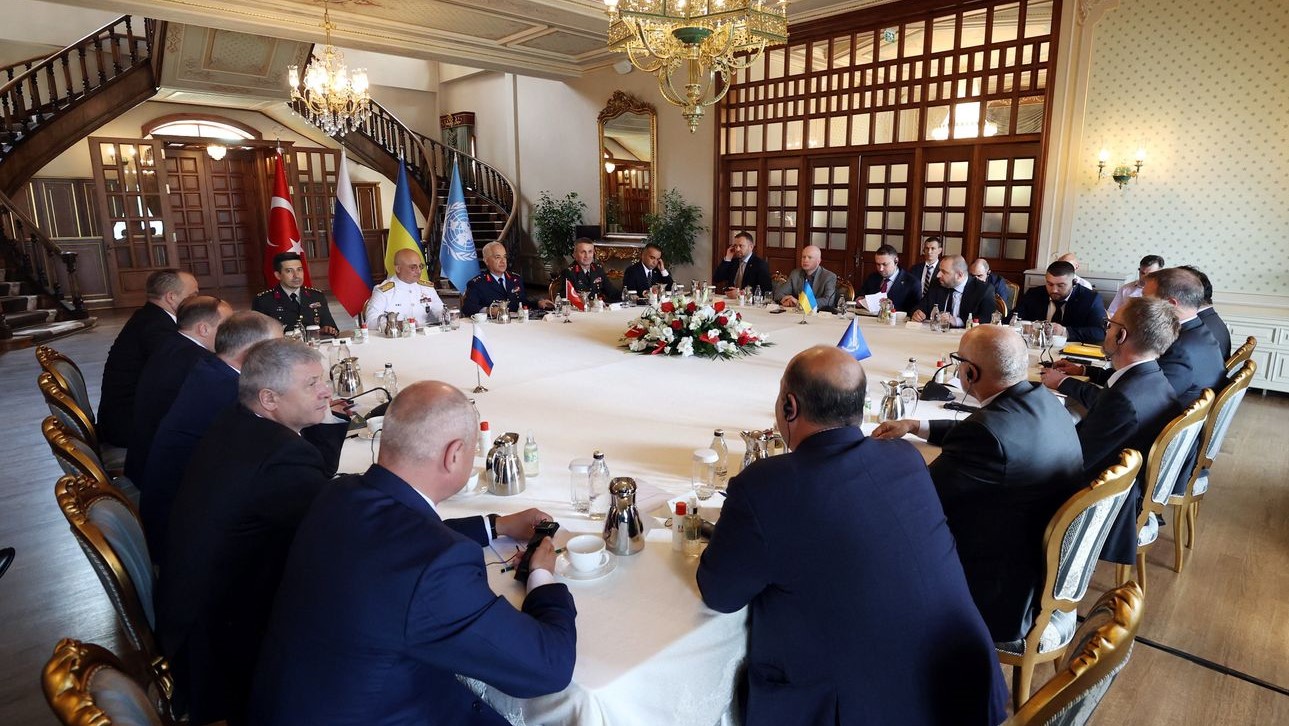 The results of the UN-brokered, Turkish-mediated talks held in Istanbul on 13 July to negotiate the safe passage of commercial cargo ships carrying Ukrainian grain exports were revealed on 14 July.

Results indicated that a general deal had been agreed to, and that the final deal on the technical issues would follow soon after.

All sides will be represented at a coordination center in Istanbul, according to the Turkish minister of defense. The center would monitor the safe passage of the vessels and assess threat levels.

The general principles of the deal have been agreed to by all sides and are awaiting minor details to be smoothed out.

The impending deal marks a major diplomatic breakthrough after several weeks of UN-led talks between all sides.

“An agreement has been reached on technical issues such as joint controls at the destination points and … the safety of navigation on the transfer routes,” the Turkish defense minister added.

The Wall Street Journal (WSJ) cited an unnamed western official who claimed that any final deal would have to be signed off by Russian President Vladimir Putin.

It is likely that Putin will discuss the subject with his Turkish counterpart Recep Tayyip Erdogan when the two meet in Tehran on 19 July.

According to sources who spoke to WSJ, the agreement would involve a limited ceasefire which only covers the geographic locations where each ship will sail.

Cargo ships would be escorted by Ukrainian vessels. The Turkish navy would inspect ships in order to address Russian concerns of possible arms smuggling.

The joint coordination center in Istanbul would allow all parties, along with the UN, to monitor all aspects of the processes.

Logistical details are still in the works, including the problem of naval mines placed by Ukrainian armed forces and Azov militants. Mines are dangerous when they are accidentally disconnected from their anchors and drift unseen at sea.

A source who spoke with the UN said that while a final deal and its implementation is on the horizon, it is not imminent.

The refusal of Ukraine to clear naval mines, on the assumption that Russia would launch a naval attack in the absence of mines, have stalled previous agreements for the establishment of safe passage of grain ships.

During a visit to Ankara on 8 June, Russian Foreign Minister Sergei Lavrov criticized Ukrainian President Volodymyr Zelensky for refusing to discuss the clearing of mines.

The two officials declared that the Russian and Turkish navies are ready to contribute to the de-mining process, and that Russia would not use the clearing of mines as a pretext to launch attacks on Ukraine.

Russia is also pushing for the relaxation of some western sanctions that directly affect the ability of Russia to export its grains to the global market.

“There are obstacles for the Russian side in the areas of ship insurance, logistics, transportation services, and banking operations due to the sanctions imposed,” a Russian diplomatic source told RIA news agency.

The talks for this deal took place ahead of the expected annual grain harvest for the year 2022, which is currently underway.

The UN-brokered plan seeks to alleviate the global food crisis that has been artificially created as a result of the Russia-Ukraine conflict, which has halted grain exports.

The Turkish customs detained a Russian-flagged cargo ship in early July due to pressure from Kiev, accusing the ship – the first commercial ship to set sail since the start of the Russian military operation in Ukraine – of carrying a load of stolen grains.

The ship was released on 6 July after Turkish authorities completed their inspection.

Keywords
Azov batallionBlack Seaceasefireeconomic crisisfood crisisgrain shortageIranIstanbulnaval minesRecep Tayyip Erdogan
More news
UAE invites Ben-Gvir to National Day reception
Dec 01, 2022
Iran, Iraq conclude contracts worth $4 billion in technology, engineering
Dec 01, 2022
47 intelligence agencies waging “hybrid warfare” against Iran: Report
Dec 01, 2022
Turkish airstrikes decimate Syrian energy facilities: Oil Minister
Dec 01, 2022
PreviousNext
UAE invites Ben-Gvir to National Day reception
The diplomatic relationship and bilateral cooperation and trade significantly improved between Israel and the UAE since the signing of the Abraham Accords
Dec 01, 2022
Iran, Iraq conclude contracts worth $4 billion in technology, engineering
Iranian exports to Iraq are expected to increase to $9 billion in the coming months, despite Iran's security concerns over Kurdish separatist groups in Iraq
Dec 01, 2022
47 intelligence agencies waging “hybrid warfare” against Iran: Report
According to Tehran, security forces have not yet resorted to the use of live ammunition against protesters and rioters
Dec 01, 2022
Turkish airstrikes decimate Syrian energy facilities: Oil Minister
The strikes have also worsened northern Syria’s water crisis, as a number of water pumps and desalination plants have been halted
Dec 01, 2022
Saudi Arabia inks arms deal with Spain to strengthen naval forces
Riyadh has increased its efforts in cooperation with nations across the globe as Saudi leaders look to move away from the kingdom's US dependency
Dec 01, 2022
Lebanese parliament again fails to elect president, pushing nation deeper into crisis
As Lebanon sinks deeper into crisis, US officials have said that once the 'complete disintegration of the state' happens, Lebanon can be 'rebuilt from the ashes, freed from the curse of Hezbollah'
Dec 01, 2022
US war chief warns Turkiye against launching ground offensive in Syria
The warning by Lloyd Austin came hours after Ankara deployed reinforcements to the border with Syria
Dec 01, 2022
Russia reinforces military presence in northern Syria
Moscow has been mediating talks between Damascus and the Kurdish groups present on the border with Turkiye
Dec 01, 2022
Turkiye dispatches new military reinforcements to Syrian border
Turkiye demands a complete withdrawal of the SDF from Manbij, Kobani, and Tal Rifaat
Nov 30, 2022
US, Oman discuss political solution for Yemen
The meetings of the US and UN envoys come as part of a continued international effort to extend the six-month truce
Nov 30, 2022
PreviousNext
Most Popular
US-Turkiye brinkmanship won’t reach a point of no return
BY MK Bhadrakumar Nov 28, 2022
The role of UK intelligence services in the abduction, murder of James Foley
BY William Van Wagenen Nov 25, 2022
A war of narratives: Who killed the child in Iran’s Izeh?
BY Fereshteh Sadeghi Nov 23, 2022
Pentagon fails to pass new financial audit, unable to account for over $2 trillion in assets
Nov 23, 2022
Israel, US to conduct air drill simulating attack on Iran
Nov 28, 2022