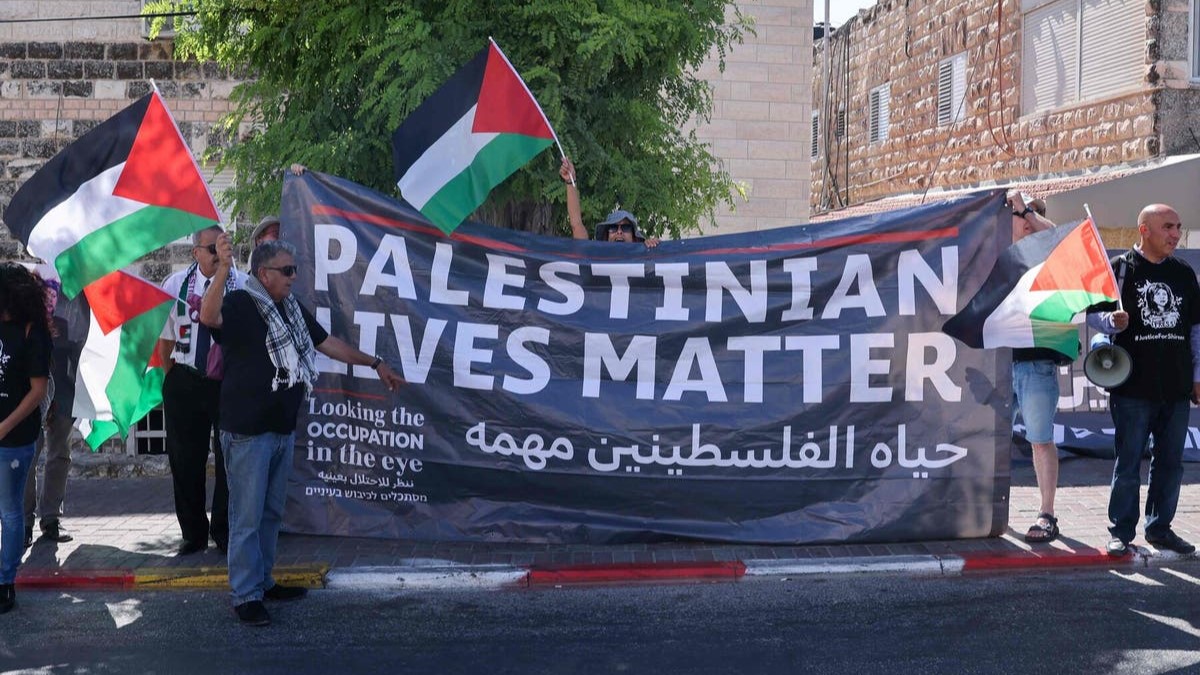 Dozens of Palestinians gathered in the West Bank cities of East Jerusalem and Bethlehem on 15 July to protest the visit of US President Joe Biden to the occupied territories.

Activists hoisted Palestinian flags and banners emblazoned with the phrase “Palestinian lives matter” outside the Augusta Victoria hospital in East Jerusalem, where Biden gave a speech to healthcare workers.

Photos | Palestinians take part in a vigil today in occupied Jerusalem, in protest of US President Joe Biden's visit to a Palestinian hospital in the city. pic.twitter.com/W2EMbJGRsC

“Palestinians and Israelis deserve equal measures of freedom, security, prosperity and dignity,” he said in a speech at the hospital complex, which serves Palestinians.

Meanwhile, outside, dozens of occupation troops were deployed to suppress the protesters, many of whom were demanding justice for the murder of Palestinian-American journalist Shireen Abu Aqla, who was killed by an Israeli sniper on 11 May.

Palestinians will hold a protest calling for justice for #ShireenAbuAkleh in A-Tur #eastjerusakem during Biden’s visit to Augusta Victoria hospital pic.twitter.com/YZiAQ9MqOv

Following their probe into the murder, the US deemed that the death of Abu Aqla had been “unintentional.”

Biden also travelled to Bethlehem to meet with the President of the Palestinian Authority (PA), Mahmoud Abbas, and to visit the Church of the Nativity.

“We have expressed the importance of re-establishing the foundations of what the peace process was based on, the two-state solution on the 1967 borders,” Abbas told reporters following his meeting with Biden.

“After 74 years of Nakba, displacement and occupation, isn’t it time for the occupation to end, and for our steadfast people to again gain their freedom and independence?” Abbas asked.

He also urged an end to “the Israeli occupation of our land – the land of a Palestinian state with East Jerusalem as its capital.”

Biden, for his part, said he was among the earliest supporters of a two-state solution along the 1967 borders, and that his commitment has not changed.

“The Palestinian people deserve a state of their own – sovereign, vibrant, and contiguous,” Biden said.

In his remarks, Biden also called the murder of Abu Aqla “an enormous loss,” and praised her “important work.”

The US, he said, “will continue to insist on a full investigation of Abu Aqla’s death.”

Despite his vague promises, Biden’s three-day trip to the occupied Palestinian territories focused on the perceived threat posed by Iran to Israel.

Alongside interim Israeli Prime Minister Yair Lapid, Biden signed the so-called ‘Jerusalem Declaration,’ which offered little to the Palestinians other than a pledge from Israel to improve the economic conditions and the quality of life for the five million people living in the West Bank and Gaza Strip.

The US president also failed to fulfill a promise to re-open a US consulate for Palestinians in East Jerusalem, to replace the one closed by his predecessor Donald Trump.