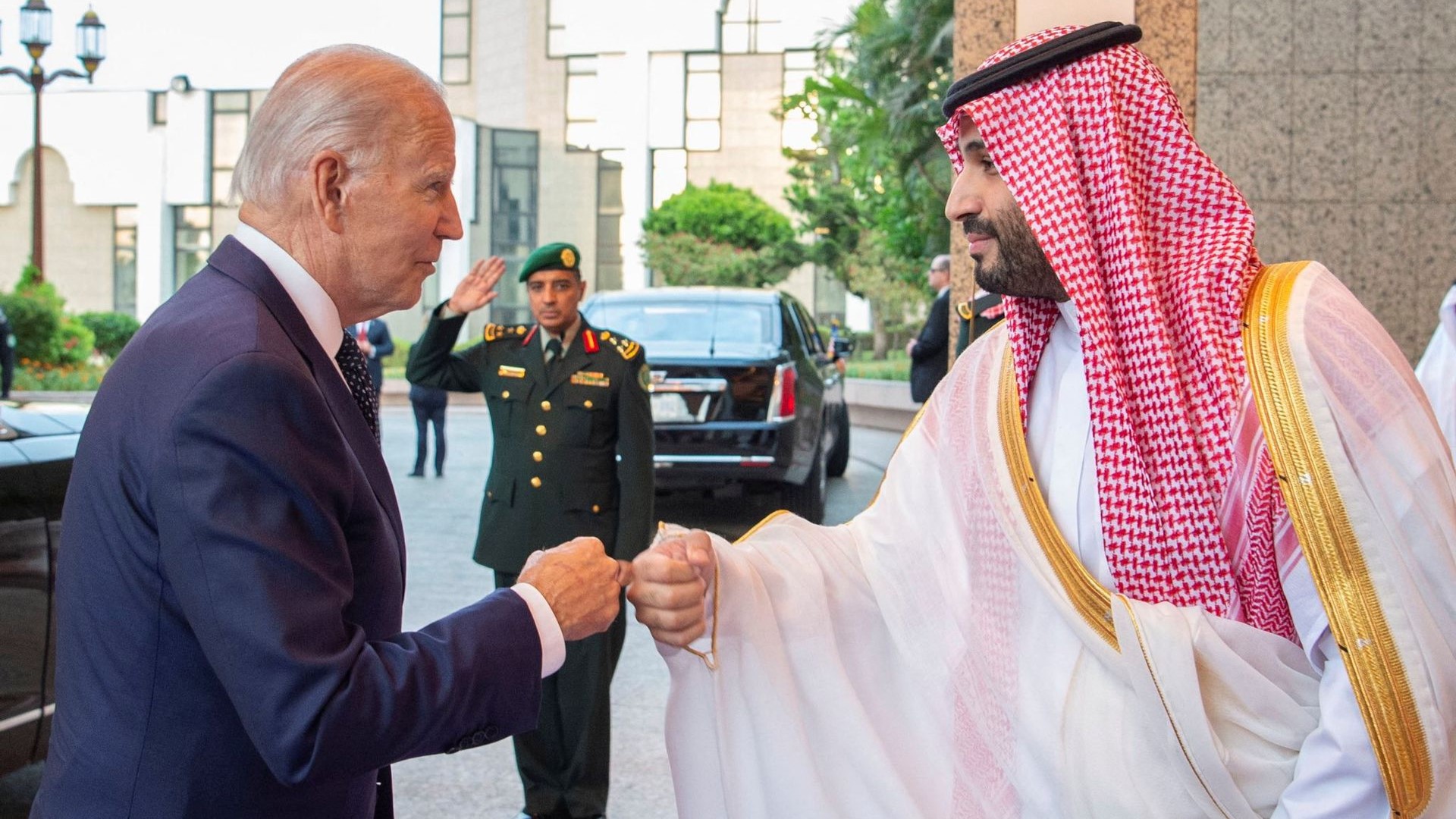 After weeks of uncertainty and deflection over the nature of Joe Biden’s trip to Saudi Arabia, on 15 July, the US president held a three-hour meeting with Saudi Crown Prince Mohammed bin Salman (MbS) at the Royal Palace in the port city of Jeddah.

Speaking to the press afterwards, Biden said he brought up the murder of Washington Post columnist Jamal Khashoggi “at the top of the meeting” with MbS – the man the CIA says approved the operation to torture and kill the Saudi journalist in 2018.

“What happened to Khashoggi was outrageous,” Biden said, adding that “I just made it clear if anything occurs like that again they will get that response and much more.”

“He basically said that he was not personally responsible for it,” Biden went on to say. “I indicated that I thought he was.”

Despite his claims, a video from the meeting shows both Biden and MbS avoiding replies to reporters’ questions about Khashoggi.

At the end of a meeting between President Biden and Crown Prince Mohammed bin Salman of Saudi Arabia, an NBC News reporter, Peter Alexander, shouted “Jamal Khashoggi, will you apologize to his family?” Prince Mohammed and Biden ignored the question. https://t.co/aJWzG21P9T pic.twitter.com/PDyfPSwN1n

Ahead of his election to the presidency, Biden made explicit promises to make the kingdom a “pariah” state and to have MbS “pay the price” for Khashoggi’s murder.

Nonetheless, a severe energy crisis battering the west due to sanctions imposed on Russia have forced the US president to do a complete about-face.

Biden received a low-key reception at King Abdulaziz International Airport in Jeddah after flying in from Israel. He was then greeted by MbS with a fist bump, in a moment broadcast widely on Saudi television.

According to Saudi media, the two sides signed 18 partnership agreements in matters of energy, communications, space, and healthcare.

“We had a good discussion on ensuring global energy security and adequate oil supplies to support global economic growth,” Biden said. “I’m doing all I can to increase the supply for the United States of America, which I expect to happen.”

However, Saudi State and Foreign Affairs Minister, Adel al-Jubeir said no agreement was made on oil, and that Saudi and OPEC countries would make a decision based on the market, not “hysteria” or “politics.”

On 16 July, Biden is set to attend a GCC+3 summit and meet with a number of Arab leaders to discuss regional missile and defense capabilities, according to officials.

The continued integration of Israel into the regional fold will also be high on the agenda, as part of a US-backed push to create a new axis driven by shared concerns over Iran, a senior US official said.

“We believe there’s great value in including as many of the capabilities in this region as possible and certainly Israel has significant air and missile defense capabilities, as they need to. But we’re having these discussions bilaterally with these nations,” the official told reporters.

Biden and MbS also agreed to remove peacekeepers from the Red Sea island of Tiran – a move which required Israeli approval, and signals a normalizing of relations between the countries.

“International peacekeepers, including US troops, will leave Tiran Island in the Red Sea where they’ve been for over 40 years,” Biden announced.

As all of these announcements were being made, Khashoggi’s fiancée, Hatice Cengiz, posted a photo of Biden’s fist bump with MbS on Twitter and said Khashoggi would have asked: “Is this the accountability you promised for my murder? The blood of MbS’s next victim is on your hands.”

Biden told reporters in Jeddah he was “sorry she felt that way.”