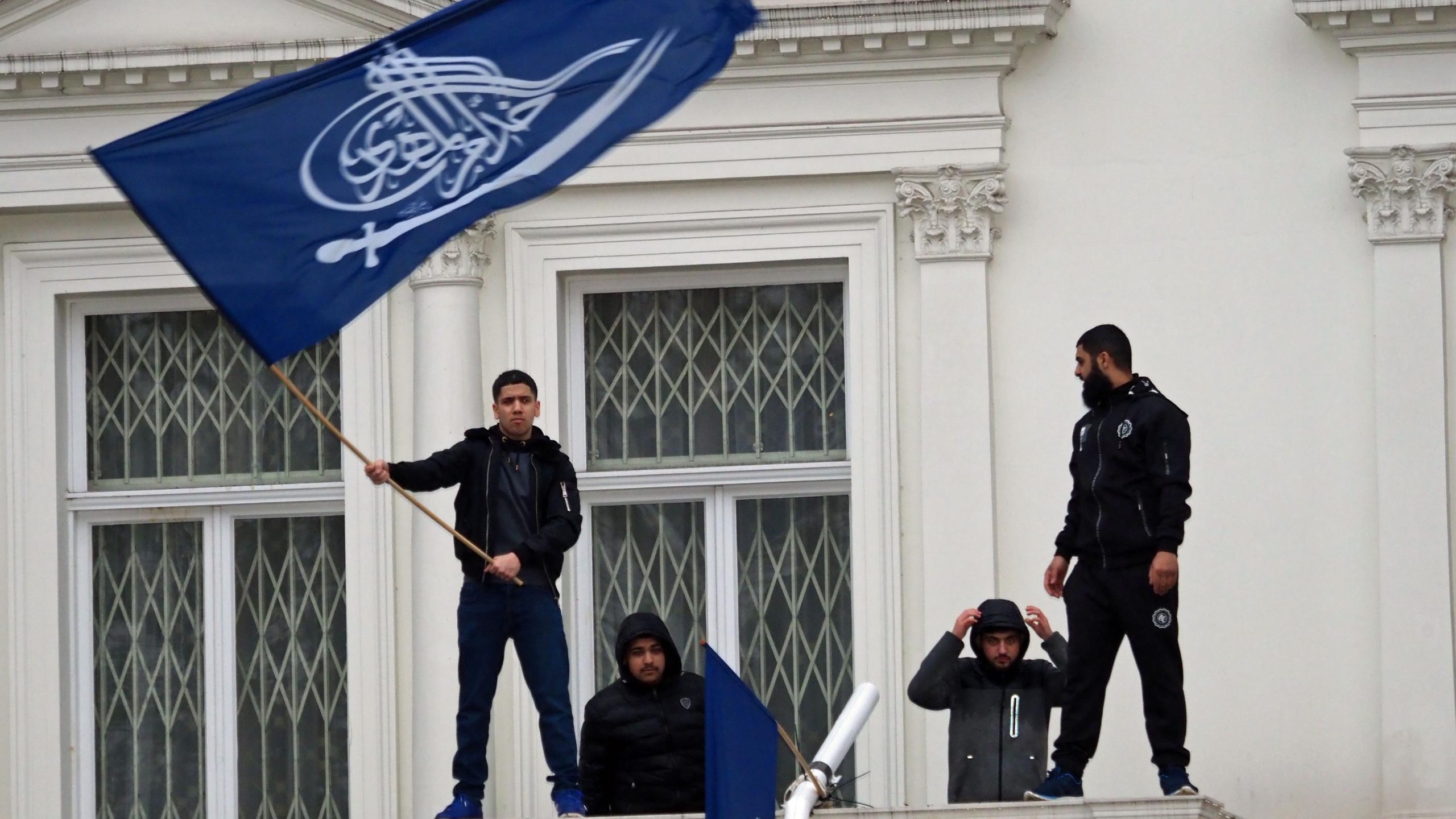 Mahdi Servants Union (MSU) members during their occupation of the Iranian embassy in London in 2018. (Photo credit: Mike Inkley/MJP MEDIA)

Supporters of a London-based Shia Muslim organization stormed the Azeri embassy in London on 4 August to protest the ban on Ashura processions by the Azeri government.

Members of the Mahdi Servants Union (MSU) occupied the embassy and raised flags inspired by the events of the battle of Karbala in 680 AD, stomping on the Azeri flag.

The few dozens demonstrators proceeded to raise their organization’s flag over the embassy and graffiti religious slogans onto the walls of the building.

Over the past few days, a video circulated on social media showing Azeri police enforcing a ban on gatherings for Ashura.

Ashura is a 10 day remembrance ceremony held on the first month in the Islamic lunar calendar.

In response to the video, the leaders of the MSU movement called for protests against the “Aliyev regime,” as worded in their official media.

The attack prompted Azerbaijan’s Ministry of Foreign Affairs to summon the UK’s charge d’affaires in Baku and request “guarantees from the [MSU] that such situations would not happen again.”

The MSU is a religious movement led by London-based Sheikh Yasser al-Habib, who is staunch critic of Iran’s Supreme Leader.

“The British charge d’affaires expressed deep regret and concern over the incident,” the statement reads.

Al-Habib was reportedly granted asylum in the UK after coming into conflict with the authorities in his native country, Kuwait.

Similarly in 2018, MSU members stormed the Iranian embassy in London to demand the release of Sadegh Hossein Shirazi, whom they alleged had been arrested by Iranian security forces.

The MSU leader is known for his anti-Iran stance, and is a staunch advocate of overthrowing the Islamic Republic.

But despite this dispute, Al-Habib and Tehran were united in their condemnation of Azerbaijan’s actions towards the Shia Muslim majority in the country.

In October 2021, several Shia Muslim clerics were detained by Azerbaijan’s State Security Service, including a prominent imam. They were held on treason charges due to their political support for Iran.

Religious members of Azerbaijan’s Shia majority have long been under suspicion by the secular authorities in Baku. Opposition media also claims the majority of the country’s political prisoners are religious activists.