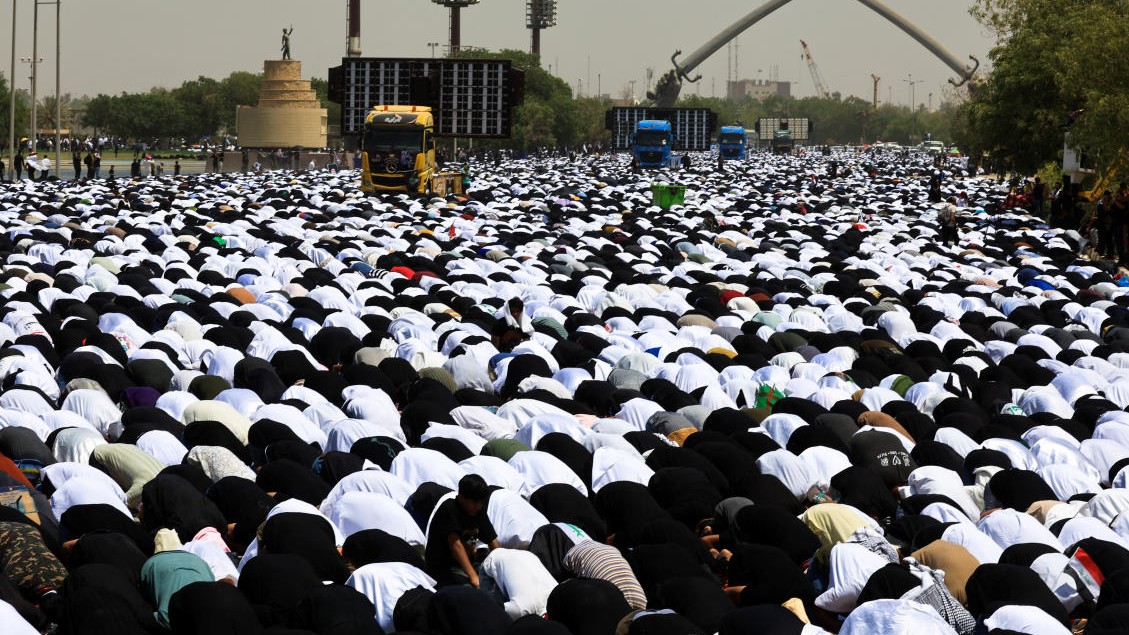 Thousands of Sadrist Bloc supporters answered the call of their leader, the prominent Iraqi cleric Muqtada al-Sadr, and gathered in the capital Baghdad’s Green Zone on 5 August for a mass prayer in the heavily guarded diplomatic zone.

In huge numbers, the Sadrist followers marched along the Green Zone carrying large pictures of the cleric, and waving Iraqi flags en route to the government zone’s main square, chanting “Yes, yes to the Sayed! Yes, yes to reform! No, no to corruption!”

The mass prayer was seen by some as a power play and show of influence by Al-Sadr, as the area is highly restricted and closed off to most Iraqis.

The Green Zone, a heavily fortified government district, is home to several foreign embassies and state-owned buildings, including the Iraqi parliament, where hundreds of Al-Sadr’s supporters have been camping out over the last week in a sit-in protest declared by the cleric to be a “message of peace and reform.”

On 2 August, Al-Sadr asked his followers to evacuate the parliament building, calling on them, however, to maintain their protest outside.

After the prayers, hundreds of Sadrists made their way back to their tents outside the parliament, where food was served to protestors amid the continued sit-in.

Sadrists after the end of the prayers inside the Green Zone. #Iraq #Baghdad pic.twitter.com/IQGrQzVipO

The initial storming of the parliament last month was done in protest of the nomination of Mohammed al-Sudani for the post of prime minister by the Coordination Framework (CF). The CF are an ad hoc group of Shia parties with close ties to the Popular Mobilization Units (PMU), also including the State of Law Coalition and the Fatah Alliance.

Just one day before the mass prayer, Al-Sadr made a speech calling for the disbandment of the Iraqi parliament, demanding early elections and rejecting any negotiations with the CF.

Since the start of the year, Al-Sadr has refused numerous calls for cooperation with the CF, claiming his right to form a majority government that excludes all other Shia political parties, and prolonging the current political deadlock in Iraq.

The CF has repeatedly called for serious and constructive dialogue with the Sadrist Bloc and the rest of the country’s political factions, and have also said that they may consider Al-Sadr’s call for early elections in the case of a national consensus.