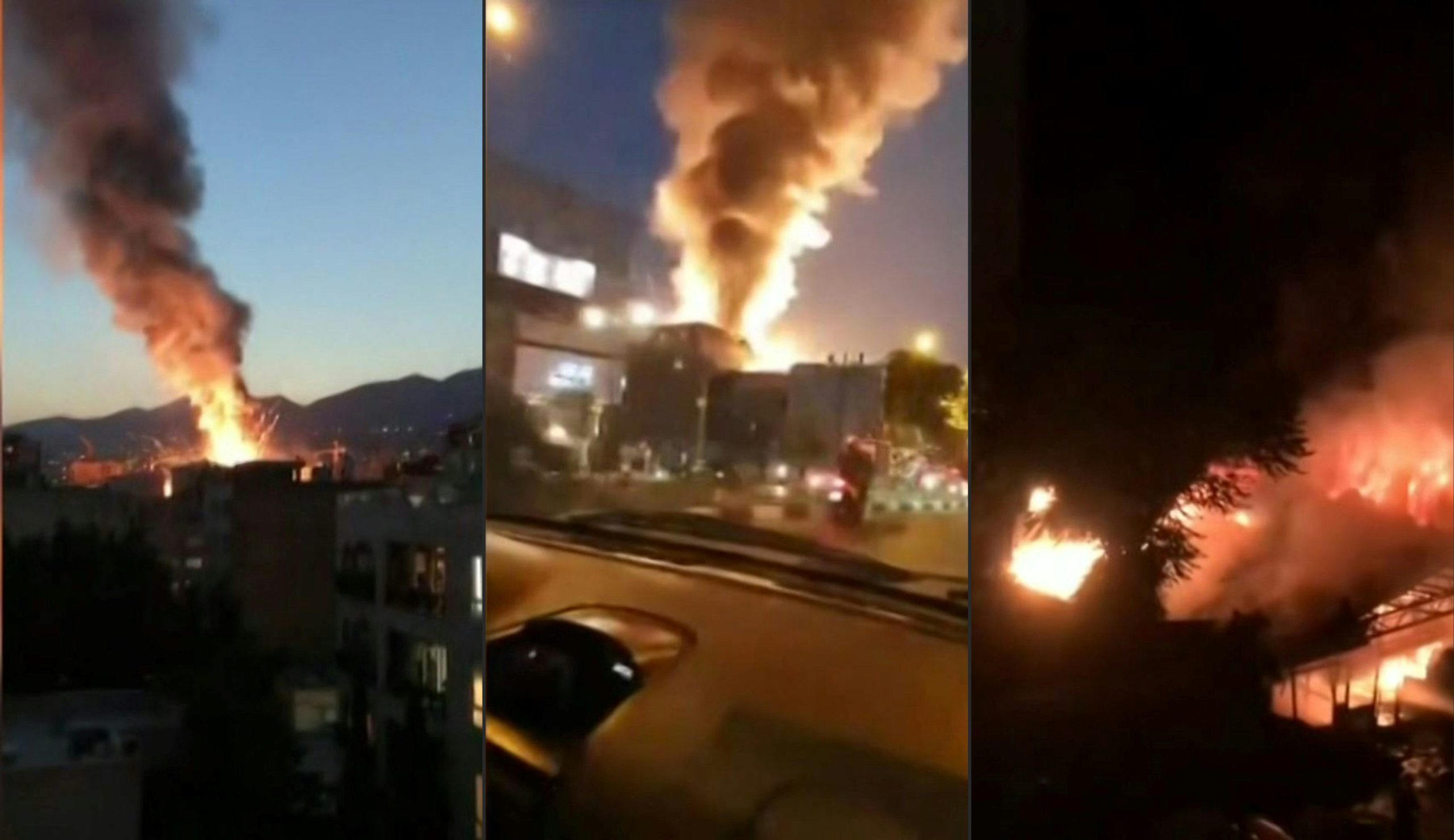 FILE- This combination image grabs from footage obtained from the Iran Press news agency on 30 June, 2020, shows footage of a powerful explosion at a clinic in northern Tehran. (Photo credit: Roy ISSA/IRAN PRESS/AFP)

David Barnea, the head of Israel’s spy agency the Mossad, said on 12 September that Iran would not be granted “immunity” even if the US returns to the Joint Comprehensive Plan of Action (JCPOA), also known as the Iran nuclear deal.

“Even if a nuclear deal is signed it will not give Iran immunity from the Mossad operations,” Barnea said. “We won’t take part in this charade and we don’t close our eyes to the proven truth.”

In response, a spokesperson for the Iranian foreign ministry said: “We do not expect a terrorist regime [to do] anything other than terrorist actions.”

Barnea’s most recent threat came on the same day when Israel’s interim Prime Minister, Yair Lapid, arrived in Germany in an attempt to persuade its western ally to ditch the Iran nuclear deal.

Israel has been working around the clock to get the US to change its plans to revive the Iran nuclear deal.

Furthermore, the country has also carried out assassinations and acts of sabotage inside the Islamic Republic in an attempt to end the talks. For the past three decades, Israeli officials and their western sponsors have claimed Iran is anywhere from “years” to “days” away from developing a nuclear weapon.

Earlier this month, US President Joe Biden assured Israeli officials that a revived nuclear deal with Iran will have no clauses preventing Tel Aviv from attacking Iranian nuclear sites or targets inside Syria.

For their part, Iranian officials have repeatedly called on the US not to allow Israel to interfere in the deal.

Last May, Iranian Foreign Minister Hossein Amir-Abdollahian said during a speech at the World Economic Forum in Davos that Israel’s sabotage efforts are taking “the national interests of the US hostage.”

Over the weekend, Washington’s allies in the talks to revive the nuclear deal issued a controversial statement in which they accused Iran of choosing “not to seize this critical diplomatic opportunity,” adding that “instead, Iran continues to escalate its nuclear program way beyond any plausible civilian justification.”

Keywords
David BarneaGermanyHossein Amir-AbdollahianIranIran Nuclear DealIsraelJCPOAMossadsabotageUS
More news
Iranian prosecutor general indicates suspension of ‘morality police’
Dec 04, 2022
Israeli jets bombard Gaza in response to Palestinian rocket fire
Dec 04, 2022
OPEC+ to stick to oil output reduction
Dec 03, 2022
Turkiye: US, Russia failed to clear Kurdish separatists from border
Dec 03, 2022
PreviousNext
Iranian prosecutor general indicates suspension of ‘morality police’
While Montazeri confirmed that operations of the morality police are currently over, there is no indication that they have been permanently dissolved
Dec 04, 2022
Israeli jets bombard Gaza in response to Palestinian rocket fire
The missile attacks were reportedly launched in retaliation to the execution of an unarmed Palestinian man by an Israeli soldier in the West Bank a day earlier
Dec 04, 2022
OPEC+ to stick to oil output reduction
Washington's most senior energy, economic, and foreign policy officials were tasked with lobbying Kuwait, Saudi Arabia, and the UAE to vote against the proposed output cuts
Dec 03, 2022
Turkiye: US, Russia failed to clear Kurdish separatists from border
Turkey has carried out a series of incursions into Syria since 2016 and already controls parts of northern Syria
Dec 03, 2022
Turkiye jails extradited PKK member from Sweden
The suspected Kurdistan Workers' Party member was immediately arrested upon his arrival at Istanbul airport
Dec 03, 2022
Iranian tanker formerly impounded by Greece docks in Syria
The arrival of the Iranian fuel at the port of Baniyas comes as Syria faces severe energy shortages
Dec 03, 2022
Neo-fascist Christian militia takes to the streets in Lebanese capital: Report
Lebanon's new right wing Christian militia boasts members that took part in last year's shooting of Hezbollah and Amal supporters in the Tayouneh neighborhood of Beirut
Dec 03, 2022
Iraq dismisses border guards commander to quell tensions with Iran and Turkey
Baghdad will form a joint committee with the leadership from the semi-autonomous Kurdish region to coordinate with Iran and Turkey an end to recent border tensions
Dec 03, 2022
Qatar pressures Hamas to avoid military escalation in Gaza until World Cup ends: Report
The reported pressure from Doha, however, has no bearing on the activities of the PIJ, another Gaza-based resistance faction with deep ties in the West Bank
Dec 03, 2022
UAE to disburse $817 million in housing support for citizens
The UAE president earlier waived off over $146 million of debts for 1,214 Emirati citizens
Dec 02, 2022
PreviousNext
Most Popular
US-Turkiye brinkmanship won’t reach a point of no return
BY MK Bhadrakumar Nov 28, 2022
The role of UK intelligence services in the abduction, murder of James Foley
BY William Van Wagenen Nov 25, 2022
A war of narratives: Who killed the child in Iran’s Izeh?
BY Fereshteh Sadeghi Nov 23, 2022
Pentagon fails to pass new financial audit, unable to account for over $2 trillion in assets
Nov 23, 2022
Israel, US to conduct air drill simulating attack on Iran
Nov 28, 2022