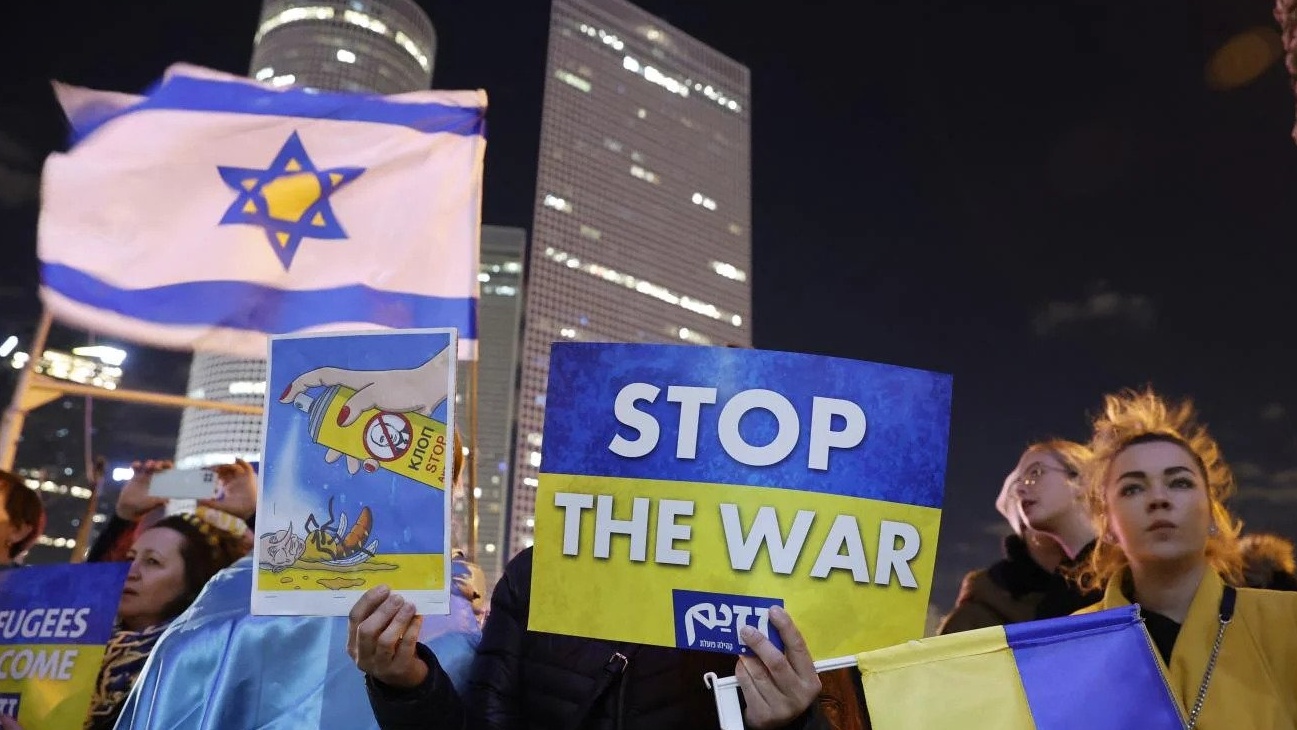 Israeli demonstrators
protest against the war in Ukraine on 12 March 2022 (Photo credit: AFP)

Seven months after Russia launched its special military operation in Ukraine, media revealed that an Israeli defense firm sold weapons to Kiev through a Polish intermediary.

Online newspaper Zman Yisrael reported on 12 September that an Israeli defense contractor, with ties to the Israeli security establishment, sold anti-drone systems to the Ukrainian army.

The equipment is classified as “advanced defensive technology” with the ability to jam the signals of small and medium-sized drones and is able to intercept them using the soft kill mechanism.

Such systems have been developed by the Rafael Advanced Defense Systems firm and are already in service near the border of Lebanon and Gaza, where they have been used against several quadcopter drones launched by the resistance.

In order to bypass Israel’s own arms sales ban to Ukraine, the weapon systems were sold to Poland in hopes to avoid any Russian retaliation in west Asia.

Officially, Israel only delivered armored ambulances and bulletproof vests on the condition that they are used exclusively by medical aid organizations and not the military.

However, the Israeli government did not interfere to prevent the deal despite its knowledge of the final destination.

This decision is in line with Lapid’s stance on the Russian operation in Ukraine, which he condemned in numerous statements, accusing Russia of “intentionally harming the civilian population.”

In response, Russia reportedly ordered the closure of the Jewish Agency for Israel in August, a move that Israeli media described as “political punishment” for positions taken by Tel Aviv.

Israel’s stance to not supply Ukraine with weapons stems from its fear of losing its freedom to operate in Syria, where Russia has its only naval base in the Mediterranean Sea.

“Iran is building terror industries in Syria for its needs. Recently it started building advanced industries in Yemen and Lebanon as well. This trend must be stopped,” Gantz claims.

Gantz spoke of several military research centers recently attacked by the Israeli air force, alleging they have been used to manufacture weapons for Hezbollah and Syria.

“The sites that I reveal to you on the map, and in particular the underground site in Masyaf where precision missiles are manufactured, constitute a significant and potential threat to the region and to Israel,” Gantz added.

Israel regularly carries out illegal strikes in Syria. The most recent one targeted the airport in Aleppo and Damascus on 6 September for the second time in just one week.