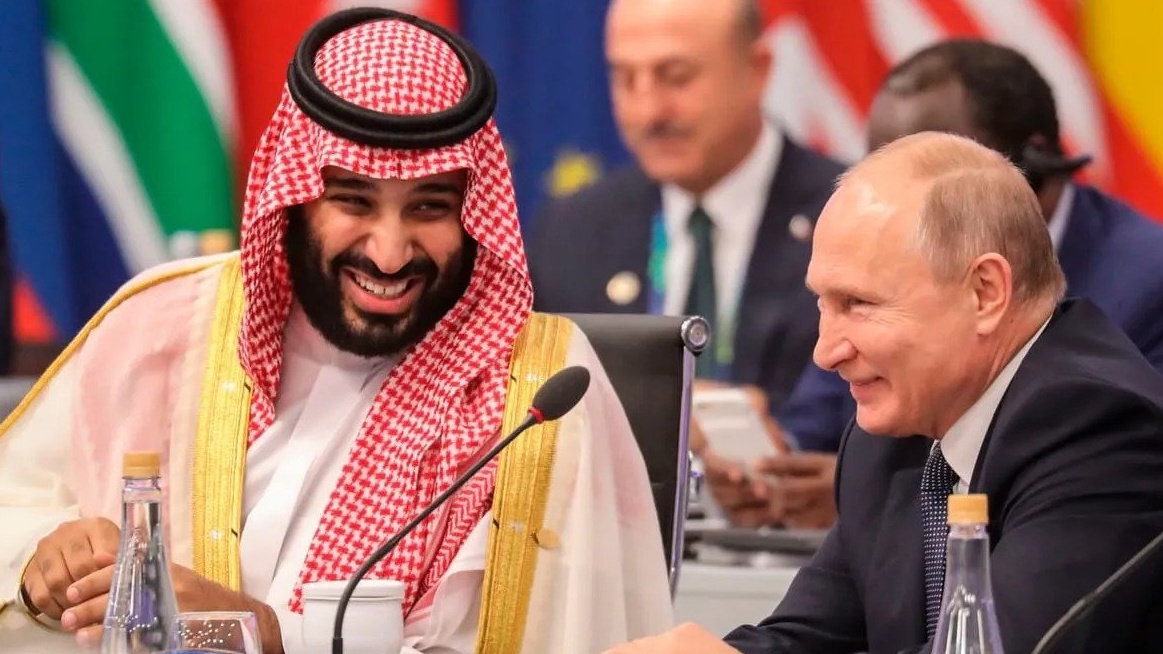 Russian President Vladimir Putin called Saudi Crown Prince Mohammed bin Salman (MbS) on 23 September to congratulate him on Saudi National day, the 90th anniversary of the unification of the Kingdoms of Najd and Hijaz.

In a statement issued by the Kremlin, both leaders discussed enhancing cooperation within the framework of the Shanghai Cooperation Organization (SCO).

Additionally, both parties tackled the decision reached by the Samarkand Summit to grant Saudi Arabia the status of a “partner in dialogue.”

The statement noted that MbS praised “the growing role of the SCO in international affairs, and expressed the kingdom’s readiness to actively participate in its activities.”

Furthermore, the two leaders discussed the Russian-Saudi coordination to stabilize the global oil market within the OPEC + landscape.

Putin reiterated Russia’s adherence to the Russian-Saudi oil agreement and invited the kingdom to the “Russian Energy Week” forum, which will take place between 12-14 October.

Edward Luce wrote in the Financial Times on 21 September that the current tensions between Saudi Arabia and US President Joe Biden’s administration have forced MbS to move towards Russia.

Even with Biden’s visit to Saudi Arabia in July, the tensions in their relationship have only escalated, as the kingdom refused to help the US lower gasoline prices back home.

Instead, MbS and Putin agreed to further benefit from the current geopolitical tensions and their toll on the oil market by increasing their revenue from oil sales.

The crown prince’s stance, and refusal to increase oil output in order to lower oil prices, have tilted the balance in favor of Russia in the face of US sanctions, which are intended to hinder Moscow’s war efforts in Ukraine.

“The impact of sanctions on Russia’s economy is very uneven. The oil sector is relatively unscathed for now,” said Janis Kluge, senior associate at the German Institute for International and Security Affairs.

As a result of the current surge in oil prices, Reuters reported that Russia’s energy exports are estimated to reach $255.8 billion in 2022, outperforming the revenue in 2021 despite the current suffocating sanctions regime against Moscow.

Moreover, Saudi Arabia played an unexpected role in mediating a prisoner swap between Ukraine and Russia on 22 September.

Ten mercenaries captured by the Russian army were transferred to Saudi Arabia ahead of their repatriation back home as part of a prisoner exchange deal.

The deal included five British, two American, and other nationals facing the death penalty in Russian-allied republics in Ukraine.

During their phone call, Putin “thanked the Crown Prince for his active and distinguished contribution to the success of the prisoner swap.”

The Saudi Ministry of Foreign Affairs expressed its gratitude to the Russian Federation and Ukraine for “their response to the efforts made by the Crown Prince for the release of the PoWs.”

Ukrainian President Volodymyr Zelenskyy also called MbS to thank him for his efforts.

The kingdom’s choice not to ally with the west against Russia has contributed to increased economic growth and greater political reach, despite the many attempts to sideline MbS.

Keywords
Mohammed bin Salmanoil pricesOPECprisoner exchange dealRussiaSaudi ArabiaShanghai Cooperation OrganizationUkraineVladimir Putin
More news
Iranian prosecutor general indicates suspension of ‘morality police’
Dec 04, 2022
Israeli jets bombard Gaza in response to Palestinian rocket fire
Dec 04, 2022
OPEC+ to stick to oil output reduction
Dec 03, 2022
Turkiye: US, Russia failed to clear Kurdish separatists from border
Dec 03, 2022
PreviousNext
Iranian prosecutor general indicates suspension of ‘morality police’
While Montazeri confirmed that operations of the morality police are currently over, there is no indication that they have been permanently dissolved
Dec 04, 2022
Israeli jets bombard Gaza in response to Palestinian rocket fire
The missile attacks were reportedly launched in retaliation to the execution of an unarmed Palestinian man by an Israeli soldier in the West Bank a day earlier
Dec 04, 2022
OPEC+ to stick to oil output reduction
Washington's most senior energy, economic, and foreign policy officials were tasked with lobbying Kuwait, Saudi Arabia, and the UAE to vote against the proposed output cuts
Dec 03, 2022
Turkiye: US, Russia failed to clear Kurdish separatists from border
Turkey has carried out a series of incursions into Syria since 2016 and already controls parts of northern Syria
Dec 03, 2022
Turkiye jails extradited PKK member from Sweden
The suspected Kurdistan Workers' Party member was immediately arrested upon his arrival at Istanbul airport
Dec 03, 2022
Iranian tanker formerly impounded by Greece docks in Syria
The arrival of the Iranian fuel at the port of Baniyas comes as Syria faces severe energy shortages
Dec 03, 2022
Neo-fascist Christian militia takes to the streets in Lebanese capital: Report
Lebanon's new right wing Christian militia boasts members that took part in last year's shooting of Hezbollah and Amal supporters in the Tayouneh neighborhood of Beirut
Dec 03, 2022
Iraq dismisses border guards commander to quell tensions with Iran and Turkey
Baghdad will form a joint committee with the leadership from the semi-autonomous Kurdish region to coordinate with Iran and Turkey an end to recent border tensions
Dec 03, 2022
Qatar pressures Hamas to avoid military escalation in Gaza until World Cup ends: Report
The reported pressure from Doha, however, has no bearing on the activities of the PIJ, another Gaza-based resistance faction with deep ties in the West Bank
Dec 03, 2022
UAE to disburse $817 million in housing support for citizens
The UAE president earlier waived off over $146 million of debts for 1,214 Emirati citizens
Dec 02, 2022
PreviousNext
Most Popular
US-Turkiye brinkmanship won’t reach a point of no return
BY MK Bhadrakumar Nov 28, 2022
The role of UK intelligence services in the abduction, murder of James Foley
BY William Van Wagenen Nov 25, 2022
A war of narratives: Who killed the child in Iran’s Izeh?
BY Fereshteh Sadeghi Nov 23, 2022
Pentagon fails to pass new financial audit, unable to account for over $2 trillion in assets
Nov 23, 2022
Israel, US to conduct air drill simulating attack on Iran
Nov 28, 2022