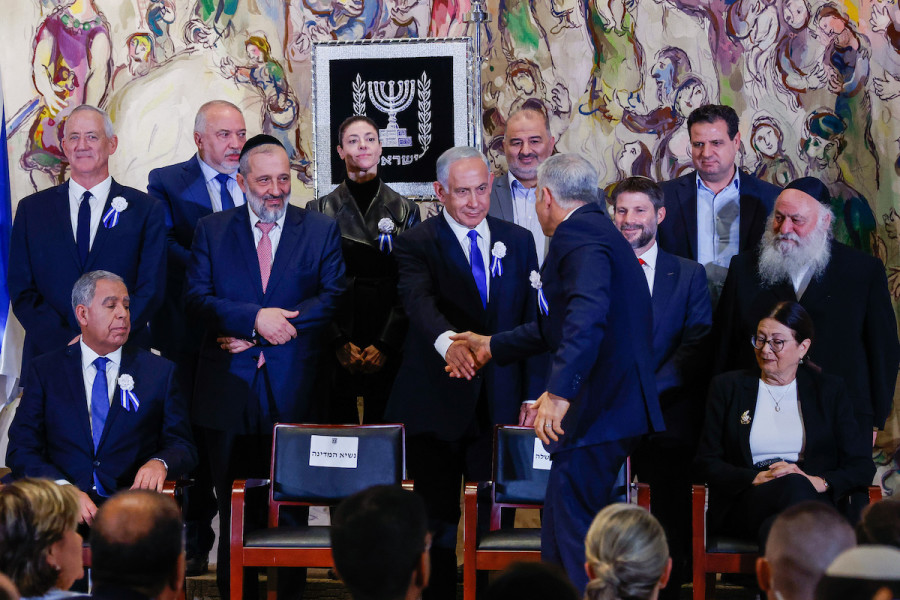 Leaders of Israeli political parties at the swear-in ceremony of the 25th Knesset on 15 November 2022 (Photo Credit: Olivier Fitoussi via Flash90)

On the morning of 16 November, the Likud party informed the representatives of the Religious Zionist and United Torah Judaism parties of their intention to cancel all negotiations for the day, in wake of the failure to make progress on several portfolios.

Israeli news website Walla reports that Prime Minister-designate Benjamin Netanyahu’s plan to announce the formation of a new majority government this week has failed, as he has yet to convince his allies of accepting non-security related cabinets.

Netanyahu refused to approve the Ministry of Defense (MoD) portfolio for Bezalel Yoel Smotrich, the head of the Religious Zionist Party, and has in return offered him the Ministry of Finance as compensation.

Due to the delicate balance in Israel, and the leverage the ministry of defense can have in the occupied territories and on the government, the Likud intends to keep it for itself.

However, in an attempt to pressure Netanyahu, Smotrich met with six Israeli army retired major generals, including Dan Harel and Yiftach Ron-Tal, according to Israeli TV channel Kan.

Additionally, prominent rabbis from the Religious Zionist party issued a statement in his support, considering him the best fit “to strengthen Israel’s security and the spirit of the army, and to prevent a Palestinian state, while regulating the settlements.”

The rabbis added that Netanyahu has to “recognize the power, the value and the partnership of the Religious Zionism party,” which makes up a large chunk of his supporters and was able to bring him back to power.

On the other hand, neither active nor reserve Israeli army commanders welcomed Smotrich’s nomination, citing concern about his experience as a soldier and his intentions, which would jeopardize their efforts in the West Bank.

“Appointing Smotrich means that there will be a deterioration that already exists on the ground. A serious catastrophe might occur if Smotrich comes and incites against the Palestinians,” said general Amos Gilad, the former head of the political and security department in the MoD.

Gilad’s statement was recapitulated by the former deputy chief of the general staff, Matan Vilnai, and Yuval Diskin, the former head of the General Security Agency – the Shin Bet, according to Israeli Channel 12.

Judah Schlesinger wrote in Israel Today that Netanyahu’s main concern over appointing Smotrich is his fear of how US President Joe Biden’s administration would react to Smotrich’s decisions and actions.

In Likud’s assessment, and in light of the cold relationship with Biden, Smotrich’s actions would deepen the existing distrust between the US and Israel, possibly affecting the US “umbrella shielding Israel.”

Due to these worries, Netanyahu has been trying desperately to persuade Smotrich and the rabbis to wait two years, and that after the wait, he would himself approve their projects, in the hope that Donald Trump would defeat Biden in the upcoming elections.

“Given the political and security situation, there is no reason to waste a single moment in negotiations. We have to take the opportunity,” Netanyahu reportedly told Smotrich.

Nonetheless, Likud’s allies were troubled by Netanyahu’s reasoning behind opposing Smotrich’s appointment, and refused to accept foreign diktats and influence on their settlement projects.