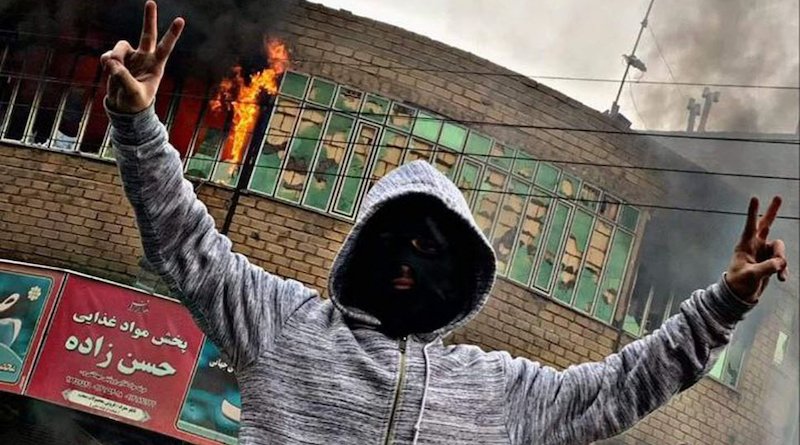 Armed clashes between Kurdish separatist elements and the Iranian security forces in the city of Javanrud in Kermanshah province of Iran escalated on 22 November, as Iran’s Islamic Revolutionary Guard Corps (IRGC) and its auxiliary forces increased their efforts to contain the chaos.

Breaking News: Heavy clashes between the IRGC and Kurdish separatists in the city of Javanrud pic.twitter.com/8SFYRy7m0U

Reports indicate that security forces surrounded Javanrud and blocked major roads to deal with the situation.

The armed separatists and rioters reportedly tried to erect barricades and occupy parts of the city after several days of violent provocations.

According to Mehr News Agency, the armed rioters had caused severe damage to public property.

The night before, on 21 November, rioters set fire to two houses belonging to military personnel while women and children were present inside.

Javandrood, Iran…
What kind of animals throw Molotov Cocktail into a house w/ women & children in it? Is this your definition of peaceful protests? Do you want this to happen in your county?! pic.twitter.com/pZKBH4nX2M

According to Deputy Head of Security of the Kermanshah Province Mohammad Pourhashemi, “some offices, public property, service providers and even residential houses have been attacked by the rioters.”

Fars News Agency reported that the rioters also attacked the IRGC and security forces in what began as stone-throwing but later escalated into using live ammunition.

Entekhab News Agency reported the deaths of three rioters who were killed in a “suspicious manner.”

As of recently, the riots have been most prominent in northwestern Kurdish-majority provinces, including the cities of Mahabad, Bukan, and Piranshahr in West Azerbaijan.

The clashes, which are the result of what appears to be an armed separatist insurgency, have been portrayed by western and opposition media as an ongoing massacre of innocent protesters.

Armed attacks by rioters have been rising across the country, and conflicting reports and narratives continue to emerge as the reality on the ground remains unclear.

On 22 November, the IRGC also launched a new drone attack on the headquarters of the Kurdistan Freedom Party in the city of Kirkuk in northern Iraq.

This attack came just one day after the IRGC targeted the bases of the Democratic Party of Iranian Kurdistan (PDKI) and the Komala Party in the Iraqi Kurdistan Region (IKR).

Commander of the IRGC Ground Forces Mohammad Pakpour issued a warning statement, urging the people to evacuate: “The people of the northern region of Iraq should evacuate areas around the terrorists’ headquarters and military camps,” as many targets are adjacent to civilian areas.

Since late September, the IRGC has launched several raids against the Kurdish separatist positions in the IKR. According to Iranian officials – and even to former senior US official John Bolton – these groups are being trained with the aim of fueling unrest across the Islamic Republic.

Officials have described the IKR as a “hub” for foreign intelligence operations, including those of the CIA and Mossad.