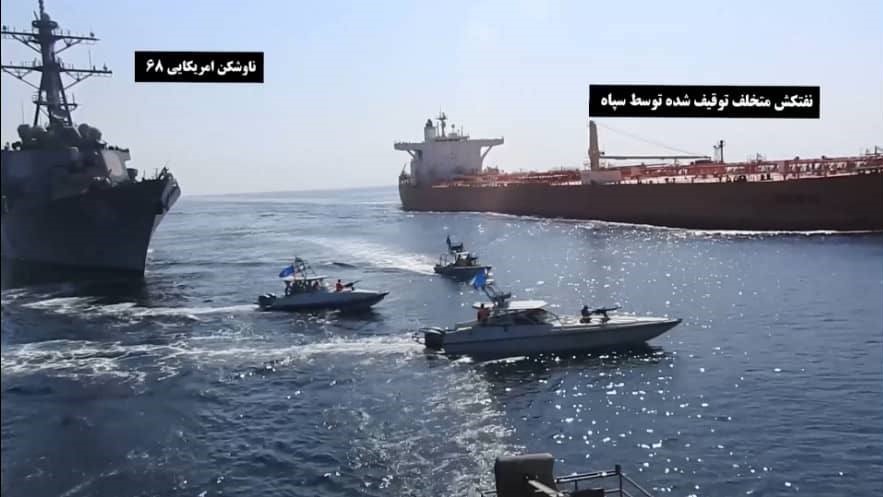 Iranian state TV reported on 3 November that the Islamic Revolutionary Guards Corp (IRGC) stymied an attempt by US forces to “steal” oil from an Iranian tanker in the Sea of Oman.

According to a Pentagon official who spoke with Newsweek on the condition of anonymity, the encounter occurred last week.

In their statement, the IRGC claims that US forces tried to redirect the tanker to an unspecified location in order to steal the cargo. However, the IRGC naval forces took control of the tanker by boarding it with helicopters and redirected it toward Iranian territorial waters.

In response, the US sent out helicopters and warships hoping to redirect the ship, even blocking its path, but none of their attempts were successful.

The tanker is now in Iranian waters in the Sea of Oman.

Since these revelations were made public, the Pentagon has given contradictory responses to the encounter.

When asked for comment, the US Navy’s Fifth Fleet said it had seen reports of the incident but had no information to provide at the time.

However, a Pentagon official later confirmed that the IRGC naval forces seized an oil tanker in the Sea of Oman, but said US troops simply observed the incident and did not confront the Revolutionary Guard.

In response, the IRGC has released video footage of the encounter; the footage focuses on Iranian movements to board and direct the ship’s course and omits the earlier attempts by US troops to seize the oil.

Asked by The Cradle’s correspondent why that footage was omitted, the IRGC Public Relations office replied that they removed that part of the video as they did not want to reveal their tactics on countering US attempts at “piracy.”

During an interview with NBC News on 3 November, the US Chairman of the Joint Chiefs of Staff, Mark Milley, referred to the confrontation saying: “Iran does not want, and they know it’s not in their interests to have an open, kinetic fight with the United States.”

“That probably won’t end well for them and they know that,” he added. The IRGC footage released today contradicts Milley’s assessment, and could cause significant embarrassment to the US military’s top brass.

Milley then went on to accuse Iran of conducting “malign operations” in West Asia.

“They do a lot of things in the grey zone, and they execute a lot of what we call malign operations throughout the Middle Eastern region, that are absolutely undermining and against US national interests,” the US military chief said.

In the past, the US has boarded shipping vessels containing Iranian oil and confiscated their cargo. Milley did not elaborate on how these US activities are not in themselves “malign operations.”

A case in point was when the United States seized and sold 1.2 million barrels of gasoline it said were being sent from Iran to Venezuela aboard four tankers on February 2021, according to the US Justice Department.