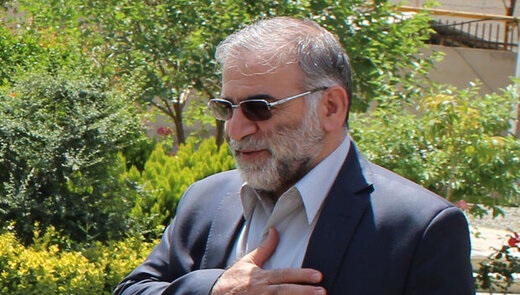 Iranian scientist Mohsen Fakhrizadeh, assassinated a year ago by the Mossad

The attempt on Fakhrizadeh’s life took place on 28 November, 2020 in the Abe-Sard region of Damavand County, about 40 kilometers northeast of Tehran, where he had travelled to spend the weekend with his family.

His killers detonated a Nissan pickup laden with explosives in the path of the vehicle carrying Fakhrizadeh, then began firing at his car and security guards.

Fakhrizadeh was the only Iranian scientist mentioned by name by former Israeli Prime Minister Benjamin Netanyahu in 2018, when he cryptically said, “Remember the name, Mohsen Fakhrizadeh.”

Experts inferred from this that Israelis posed a direct threat to Fakhrizadeh’s life.

In a lengthy interview with the Islamic Republic News Agency (IRNA) published on 27 November, Abbasi reveals that a team consisting of various intelligence services, including the American CIA, British MI6, and Mujahedeen-E-Khalq (MEK) arrived in Iran to assassinate Fakhrizadeh, yet that plot was foiled.

Abbasi’s interview comes on the eve of the Vienna nuclear talks, the first since Iran’s President Ebrahim Raisi took office. This round will specifically discuss the removal and verification of US sanctions imposed on Iran. Iranian deputy foreign minister Ali Bagheri is now in Vienna, with a delegation consisting of 40 people.

Following are excerpts from Abbasi’s interview:

“The possibility of Fakhrizadeh’s assassination has been debated since about 2009. In 2008, they wanted to assassinate Mr. Fakhrizadeh, and me, and another person in Isfahan. Of course, their priority was Mr. Fakhrizadeh.

From then on, the security forces protected him. So much so that they changed his house, and even I did not know where his house was until he was martyred, with all the family travel we had. He was guarded for 12 years and had a bodyguard, and it can be said that it was these guards who were able to delay his assassination. In 2008, a team came to take him out. Security forces discovered the team and thwarted the assassination.

It was a combined team. Most intelligence gatherings were carried out by MEK and counter-revolutionary forces from within the country. The UK intelligence service (MI6) was also very active, playing a key role in identifying nuclear scientists and even directly demonstrating its role.

The MI6 agent would come and say, ‘I came from MI6 and I want to talk to you.’ That is, they went to the residence of an Iranian expert or businessman abroad and formally asked questions about those who were targets.

My name and Mr. Fakhrizadeh’s name have been included in UN Security Council Resolution 1747 since March 2006, and we and several others were sanctioned under that resolution.

We were told at the time that we would be assassinated. It was clear to us that the struggle and the growth and advancement of the Islamic Republic of Iran was a price to pay.

It seemed to us that the names of the professors on signs on the wall directing people to the professors’ rooms were given as information to foreign intelligence services, which was later reflected on the websites of the MEK forces as scientists working on nuclear research. [We know this] because only the names of two people whose rooms did not have signs were absent from the list.

There may be speculation among some that these scientists were trying to obtain nuclear weapons and that is why they were targeted. The name of the organization that was recently governed by Mr. Fakhrizadeh was the Organization for Defense Research and Innovation or New Defense Research. This means that if one wants to work in defense innovation, one needs a wide range of science and technology. Nuclear (energy), missiles, and electronics achievements, and so on would come out of this on their own.

The reason we don’t build nuclear weapons is quite clear, and it is based on the explicit fatwa of the Supreme Leader of the Revolution on the prohibition of nuclear weapons. However, Fakhrizadeh had created this system and his concern was not only to defend our country. Our country supports the Resistance Axis, and when you get into these issues, the Zionists become sensitive.