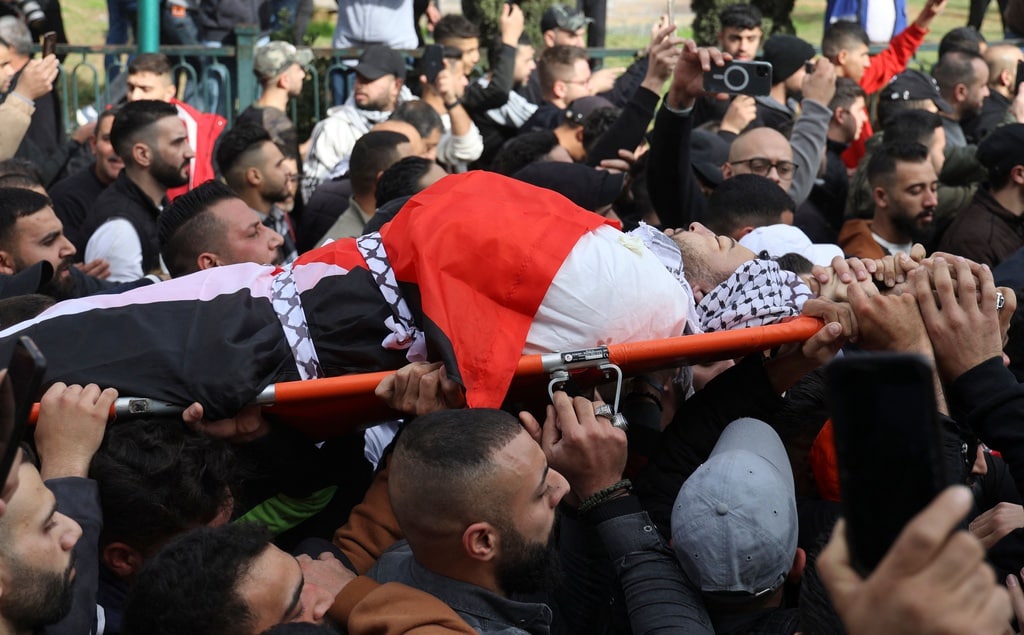 Palestinian mourners taking part in the funeral procession of martyr Jamil Kayyal who was shot dead last night by the Israeli occupation army in the occupied city of Nablus. (Quds News Network)

An early morning incursion on 13 December into the occupied West Bank city of Nablus by Israeli occupation forces resulted in the killing of one Palestinian and the injury of two others.

Palestine-based WAFA news agency reports that Jamil al-Kayyal, 31, was shot in the head by live ammunition when a special forces unit of the occupation army raided the Ras al-Ain area.

The report also said that during the raid an occupation military vehicle ran over two Palestinian youths, leaving them with severe injuries.

According to WAFA, occupation authorities had gone to the area to arrest a Palestinian man. These type of raids are a daily occurrence in the occupied territories. Under the military laws of the occupation, army commanders do not need to obtain search warrants to conduct these raids.

Al-Kayyal is the fourth Palestinian to be killed by the Israeli occupation in the last 10 days.

On 4 December, Israeli occupation forces shot dead a Palestinian man in the occupied East Jerusalem. A statement by the occupation claimed that the man stabbed an Israeli and tried to attack police officers.

A Palestinian teenager, 15, was killed on 6 December by the occupation forces at a military checkpoint in the occupied West Bank. Israeli media alleged that the teenager tried to ram his vehicle into the checkpoint, a claim that has not been independently verified.

On 10 December, Jamil Abu Ayyash was shot dead when Israeli soldiers opened fire on a group of civilians that had gathered in Beita village in the occupied West Bank to protest against the building of an Israeli settlement in the area.

Various stakeholders, including the United Nations, have on numerous occasions condemned the frequent use of excessive and lethal force against Palestinians by Israeli soldiers.

On 7 December, the UN Human Rights Commissioner Michelle Bachelet expressed concern at the ever-increasing number of Palestinians killed by occupation forces and the ”chronic impunity” shown by Israeli authorities.