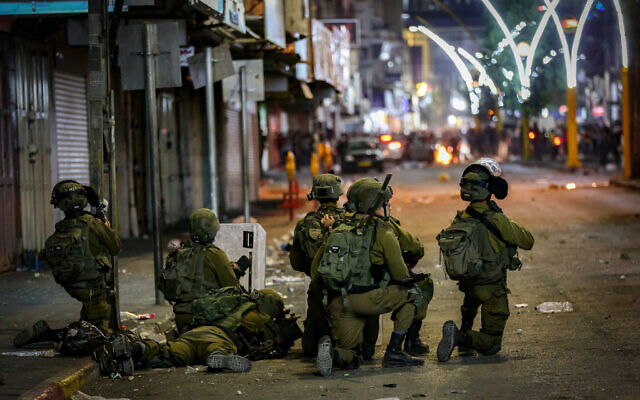 Israeli soldiers firing at Palestinian protesters in the occupied West Bank city of Hebron on May 12, 2021. File photo. (Wissam Hashlamoun/Flash90)

Hundreds of Palestinians sustained injuries on 25 December when Israeli soldiers violently repressed a protest by Palestinians in the city of Nablus in the occupied West Bank.

According to the Palestinian Red Crescent (PRC), 19 people sustained gunshot wounds after being shot by live ammunition, 95 suffered injuries caused by rubber-coated steel bullets, while more than 200 had breathing difficulties due to exposure to tear gas.

The protests broke out in response to an attack on three Palestinian villages by hundreds of Israeli settlers on 24 December.

The villages of Burqa and Beita were raided by settlers protected by soldiers of the occupation. The settlers went on a rampage, beating up local residents and causing significant damage to property. A few hours later, another group of settlers attacked dozens of Palestinian homes in the town of Sebastia, north of Nablus.

According to the mayor of Sebastia, Mohammad Azem, dozens of settlers descended on the town and started shooting and throwing stones at Palestinian homes. They also fired on other Palestinians who rushed to the town to help residents.

The town residents said that Israeli soldiers refused to protect them and only took action when the residents organized themselves to repel the attackers.

The past few months have seen an upsurge in organized attacks against Palestinians by Israeli settlers.

The Israeli occupation has been accused of deliberately failing to take any action against the organizers of these attacks.

On Friday, a human rights organization accused the Israeli government of colluding with the settler groups behind the attacks.

The Euro-Mediterranean Human Rights Monitor said, “the official Israeli response to settler violence clearly reflects the nature of its apartheid regime, as settler attacks are not only ignored but protected as well. Meanwhile, Palestinians are prosecuted and tried if they fight these attacks.”

A senior official of the Hamas Resistance Movement, Abdel Hakim Hanini praised Palestinians in the occupied West Bank for standing up against the attacks by Israeli settlers.

“We salute our heroic people who rose to defend our land and towns west of Nablus, which are experiencing clashes and confrontations with the enemy army and the herds of settlers,” Hanini said.