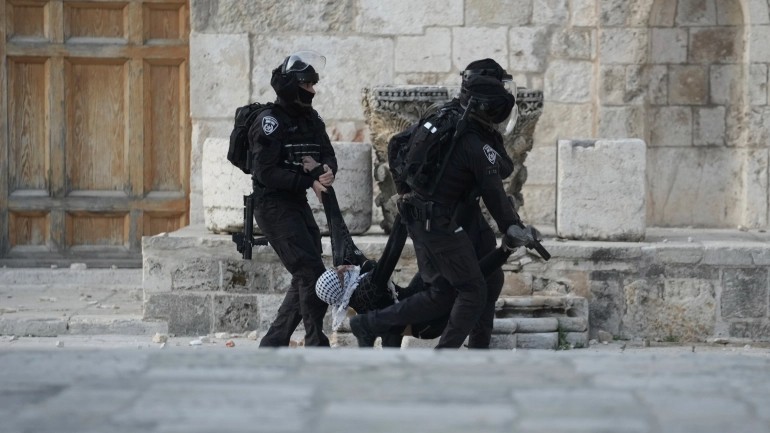 Israeli occupation forces raided Al-Aqsa Mosque for the sixth day in a row on 22 April, injuring at least 30 Palestinians and three journalists.

According to the Palestinian Red Crescent, two Palestinians sustained critical injuries and 14 have been transferred to the hospital for medical treatment.

Palestinian news agency WAFA reported that a large wave of settlers, under the protection of Israeli troops, stormed the mosque following the attack.

Tensions have been high in occupied East Jerusalem and the West Bank after a wave of deadly attacks in Israel, resulting in incessant violence towards Palestinians and daily harassment of worshippers at the Al-Aqsa Mosque.

On 15 April, at least 152 Palestinian worshippers were injured after Israeli forces launched a violent raid on Al-Aqsa Mosque coinciding with the start of the Jewish holiday of Passover.

The occupation troops completely emptied the holy site with the use of stun grenades, tear gas, and rubber-coated steel bullets.

Since then, worshippers at the holy site have witnessed daily incursions by both occupation forces and settlers.

On 20 April, over 1,000 settlers entered the holy grounds and performed Talmudic rituals under the protection of the occupation troops, according to local reports. A day later, Israeli forces stormed the mosque again, facilitating the entry of a reported 762 extremist settlers.

Coinciding with the latest Israeli raid on Al-Aqsa, 20-year-old Palestinian Ibrahim Labadi passed away on 22 April from wounds sustained during clashes with Israeli forces after they raided the town of Yamoun in the West Bank on 18 April.

Tensions in the West Bank have been high with Israeli troops carrying out extensive arrest and search campaigns. At the start of Passover on 15 April, Israel implemented a full security lockdown, shutting down the Gaza and West Bank crossings.

In response to the growing provocations, Palestinian resistance factions announced on 19 April that they were raising the general state of alert to protect Al-Aqsa Mosque and occupied East Jerusalem.

In a joint statement, the Palestinian resistance factions called for the “continuation of the permanent state of confrontation in all its forms with the enemy … in defense of holy sites and in rejection of occupation, settlement, and Judaization.”