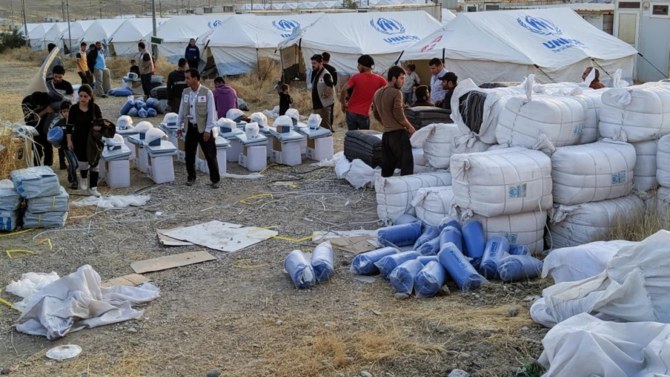 “Lebanon can no longer bear this burden on its own, without assistance,” the minister was quoted as saying, while also calling on the UN to share the responsibility.

After a meeting held by Lebanon’s ministerial committee on Syrian refugees, Bayram told media that refugees receive cash assistance in US dollars from the UN.

Refugees also receive healthcare and educational support, and that Lebanese citizens are forced to pay for these services from their own savings without any similar support for themselves, which is unfair, the minister said.

“We no longer have diesel boats to monitor the sea, and the UN and UNHCR must step up and bear their responsibilities. The Lebanese are queuing at banks and ATMs, while others receive direct aid in dollars. They share our water, electricity and resources while we do not get anything,” he said.

Minister of Social Affairs Hector Hajjar said that he would brief the UN High Commissioner for Refugees on the discussion of the ministerial committee.

Lebanon has been suffering from economic and social pressures caused by the presence of refugees on its territory and is seeking to resolve this issue.

Lebanese Foreign Minister Abdallah Bou Habib said in November of last year that western countries are trying to obstruct the return of Syrian refugees to their homeland. He also noted that Lebanon was “facing some difficulties from the west because they say that they do not want these refugees to return to Syria for reasons related to their position on the Syrian government.”

On 5 April 2021, the Russian-Syrian inter-departmental coordination headquarters issued a joint statement accusing the US of intentionally setting up obstacles for the return of Syrian refugees to their country.

The statement declared that “despite the colossal efforts the Syrian authorities have taken to create favorable conditions for the return of their citizens to their homes, the US and its allies continue to implement a whole set of measures including an unprecedented propaganda outreach campaign at keeping the refugees on the territory of Syria’s neighboring countries.”

Approximately 1.5 million refugees from Syria are currently residing in the crisis-hit nation, making up nearly one quarter of the country’s total population.