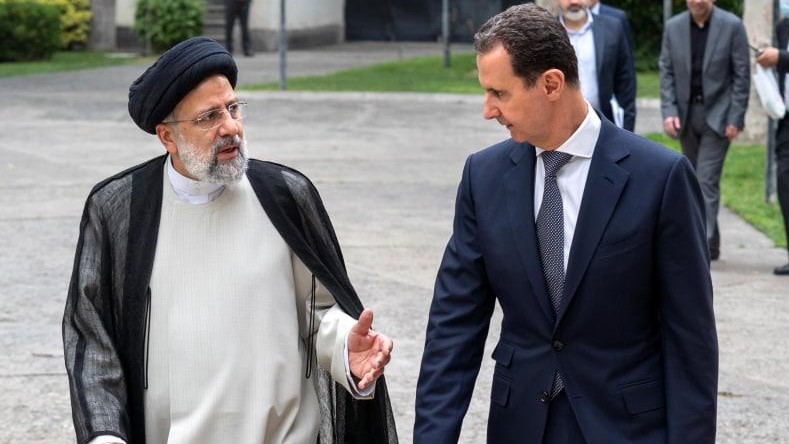 Syrian President Bashar al-Assad made a surprise trip to Iran on 8 May, where he met with Supreme Leader Ayatollah Ali Khamenei and Ebrahim Raisi, President of the Islamic Republic of Iran.

The three leaders called for stronger ties between Tehran and Damascus as well as the need to maintain a path based on principles, Iranian and Syrian state media outlets reported.

Discussions were based on bilateral cooperation and mutual understanding on regional issues and their challenges, in addition to areas of common interest for both nations, according to Syrian state news agency SANA.

During the meeting, President Assad said that the course of events proved once again “the correctness of the vision and approach that Syria and Iran have followed for years, especially in confronting armed groups. This confirms the importance of cooperation in not allowing the US to rebuild an international armed system to harm the countries of the world.”

Iranian state TV quoted the Syrian president as saying that the Palestinian cause today is “re-imposing its presence and importance in the consciousness of the Arab and Islamic world, thanks to the sacrifices of the heroes of the resistance.”

The Syrian president also said that, through its actions over four decades, Iran has demonstrated how principles should be upheld. He said that Iran’s support for the region is not limited to armaments, but to the spirit of resistance.

Ayatollah Khamenei emphasized Iran’s continued support for Syria to “complete its victory and liberate the rest of the Syrian lands. Syria is achieving historic victories thanks to the courage of its president, and the strength and loyalty of its people and army.”

Khamenei also spoke of his hope for liberating the remaining occupied areas of Syrian land, and maintaining the strong relationship between Iran and Syria and their people.

President Raisi said Iran is committed to expanding economic and trade relations between both countries, and will continue to provide support to Syria and its people.

According to a report from Amnesty International released on 5 May, the drop in international aid to northwestern Syria has created a severe health crisis, with medical facilities struggling to cope with the scarcity of resources.

The Syrian economy has been suffering as a result of the sanctions imposed by the US under the Caesar Act of 2019 as well as the ongoing conflict between Russia and Ukraine.