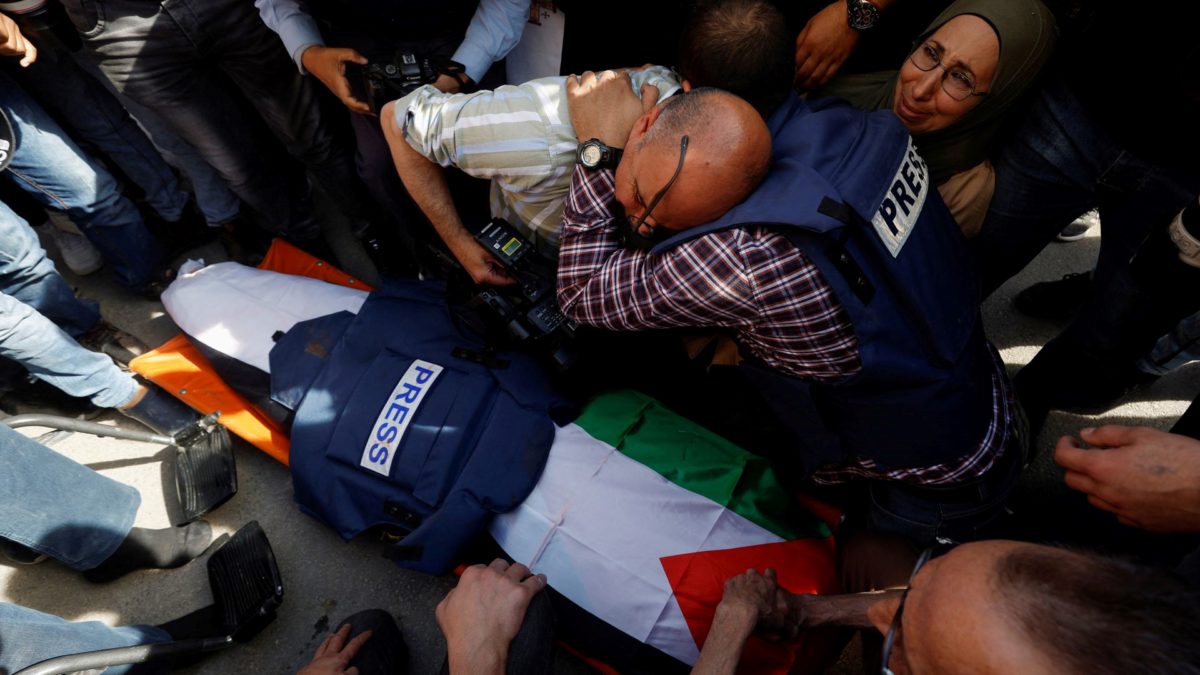 Journalists mourn over the body of Al Jazeera reporter Shireen Abu Aqla, who was killed by Israeli gunfire during a raid on Jenin in the occupied West Bank. 11 May, 2022. (Photo credit: Reuters)

In the wake of the fatal shooting of Al Jazeera journalist Shireen Abu Aqla Nasri by occupation troops, Israeli Prime Minister Naftali Bennett has attempted to dodge responsibility by saying she was likely killed by Palestinian gunfire.

“There is a good chance that armed Palestinians, who fired widely, are the ones who led to the unfortunate death of the journalist,” Bennett told reporters on 11 May.

This, however, ignores claims by other journalists who came under Israeli fire and said no Palestinian forces were nearby when the Al-Jazeera correspondent was killed.

“There were no Palestinian factions near us, and if there had been, we would not have approached this area,” Palestinian journalist Ali Samoudi, who was shot in the back by the occupation troops, revealed.

He also said the Israeli soldiers began firing on the group of journalists without warning.

In their attempts to obscure the tragic events, Israeli authorities have also criticized the Palestinian Authority (PA) for allegedly refusing to cooperate on a “joint investigation” into the death of Abu Aqla.

Foreign Minister Yair Lapid said Tel Aviv offered the PA a “joint pathological investigation into the sad death,” going on to say that “journalists must be protected in conflict zones and we all have a responsibility to get to the truth.”

Meanwhile, the US ambassador to Israel, Tom Nides, said via Twitter that he encourages “a thorough investigation” into the circumstances of the murder of the Palestinian-American journalist.

Very sad to learn of the death of American and Palestinian journalist Shireen Abu Akleh of @AJArabic @AJEnglish. I encourage a thorough investigation into the circumstances of her death and the injury of at least one other journalist today in Jenin.

For their part, Al Jazeera issued a statement condemning the “blatant murder,” and adding that “the Israeli occupation forces assassinated in cold blood Al Jazeera’s correspondent in Palestine … while conducting her journalistic duty, clearly wearing a press jacket that identified her a journalist.”

The IFJ has repeatedly condemned Israel’s deliberate targeting of journalists and media facilities in occupied Palestine. According to WAFA, least 55 Palestinian journalists have been killed since 2000, with no one ever having been held responsible.