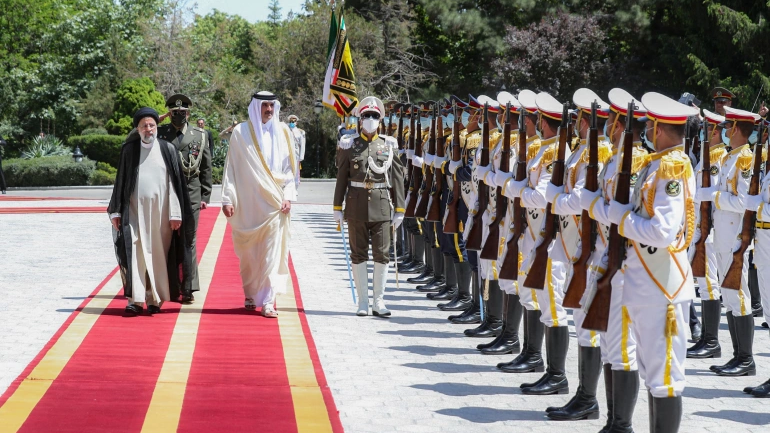 The Emir of Qatar, Tamim bin Hamad Al Thani, arrived in Tehran on 12 May with a high-ranking delegation to hold meetings with the Iranian president and high-ranking Iranian officials.

Iranian President Ebrahim Raisi stated that the visit by the head of the state of Qatar marks a turning point in bilateral relations between the two countries and is an important part of boosting mutual cooperation regionally and internationally.

In a joint press conference, the Iranian head of state stated that the bolstering of relations between the two sides will extend to political, economic, trade, cultural, energy, and tourism.

Tehran and Doha have been seeking to strengthen trade ties, with several cooperation agreements having been signed between the two in Doha on 21 February. Iran plans to open a trade office in Qatar to facilitate bilateral trade and commerce.

Qatar is also seeking to act as a mediator between Tehran and Washington on the removal of sanctions and the revival of the 2015 nuclear agreement, as the Vienna talks have been at a standstill for several months.

The deadlock began on 11 March after the US seized several Iranian oil ships and the Iranian team left Vienna in protest. The talks have not been revived since.

Washington’s ongoing refusal to remove the designation of the Islamic Revolutionary Guard Corps (IRGC) as a terrorist organization is another obstacle to progress on the negotiations.

Enrique Mora, the Iran nuclear negotiations coordinator for the EU, arrived in Tehran on 10 May in order to break the deadlock.

Iran and Qatar are also seeking cooperation for logistics and tourism during the upcoming 2022 FIFA World Cup, scheduled to be held in Doha. Iran has suggested the use of its tourist-friendly Kish Island and its hotels in the event of insufficient capacity in Doha.

The Qatari Emir welcomed Iran’s offer for assistance in providing the necessary logistics for the upcoming global sporting event.

Tehran also praised Qatar’s condemnation of the murder of Palestinian-American journalist Shireen Abu Aqla Nasri by Israeli forces in the occupied Palestinian town of Jenin. Abu Aqla was working for the Qatari state-funded Al Jazeera network at the time of her death.

Iran stood by Qatar after Saudi Arabia and other Gulf Cooperation Council member states cut off diplomatic relations in 2017, before restoring them in 2021.