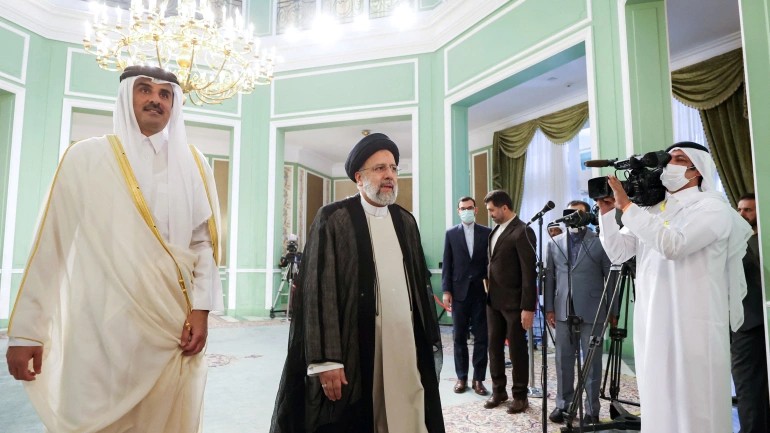 The Emir of Qatar, Sheikh Tamim bin Hamad al-Thani, arrived in Tehran on 12 May and met with Iranian Supreme Leader Ayatollah Ali Khamenei and President Ebrahim Raisi, for talks on bilateral and regional issues, as well as efforts to revive sanctions removal talks between Iran and western powers.

Khamenei was also quoted to have expressed support for Al-Thani’s “condemnation of crimes committed by the Zionist regime” in the wake of the tragic killing of Al-Jazeera correspondent Shireen Abu Aqla at the hands of Israeli occupation forces.

Qatar’s Emir also held a news conference with President Raisi, during which both leaders strongly condemned the killing.

“The crimes of the Zionist regime will never create security for [Israel] … Journalists must be proud of themselves for communicating the voice of the Palestinian people to the world,” Raisi said.

The Iranian President also weighed in on regional affairs, calling for an end to the Saudi-led war on Yemen and for stability in Afghanistan.

These talks coincided with the visit of EU coordinator for the Vienna negotiations to Iran, Enrique Mora, who met with chief Iranian diplomat, Ali Bagheri.

A day later, Mora was arrested at Frankfurt Airport for unknown reasons while on route to Brussels, but was released half an hour later.

In relation to the Vienna talks, Al-Thani said that Qatar views the negotiations “positively, because the only solution to any dispute we see is through peaceful means and through dialogue.”

“We are pushing forward, God willing, with all parties, with the aim of reaching an agreement that is fair to all,” the Emir added.

The sanctions removal talks were suspended in March after the US seized two Iranian oil cargo ships that Washington claims were violating sanctions. Hours later, following the announcement of the suspension, the Iranian delegation left Vienna.

Despite efforts to revive the talks, areas of disagreement remain prevalent, including the US refusal to remove the Iranian Revolutionary Guard Corps (IRGC) from the terrorist list.