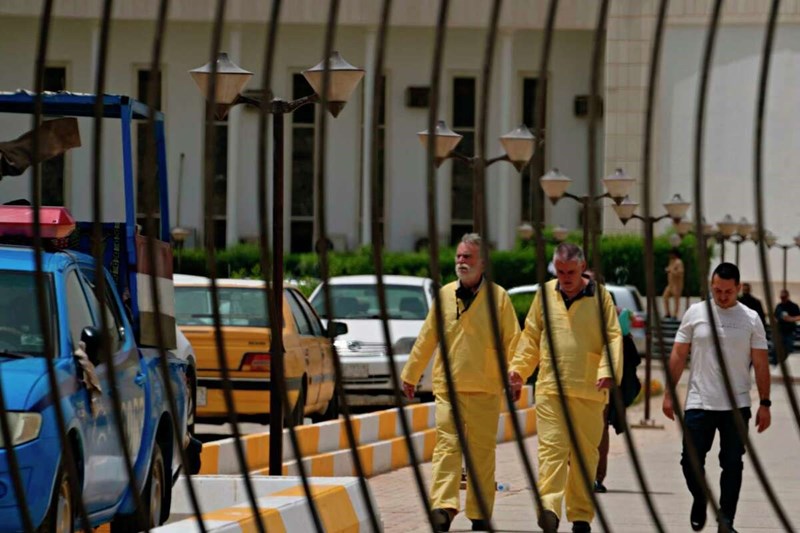 A British citizen and a German citizen, who are facing the death penalty for their attempt to smuggle antiquities out of Iraq, have argued “their good faith” at the start of their trial on 15 May in Baghdad.

After an initial two-hour hearing, the trial was adjourned until 22 May by the court.

Volkar Waldmann, a 60-year-old psychologist from Berlin, and James Fitton, a 66-year-old retired British geologist, attended the hearing dressed in the yellow uniforms of detainees at Iraq’s criminal court.

Fitton’s baggage contained about a dozen stone fragments, pieces of pottery, and ceramics, according to customs officers.

“I didn’t realize that taking them was against the law. I am a retired geologist. My interests still lie in geology and ancient history and archaeology,” Fitton told the court.

The two were detained at Baghdad airport in March after Iraqi customs officials found them in possession of ceramic shards taken from the Eridu archaeological site in southern Iraq.

According to the judge, they were charged under a 2002 antiquities law which calls for the death penalty if the accused are found guilty of “intentionally taking or trying to take out of Iraq an antiquity.”

“Whilst on the tour, our father visited historical sites around Iraq, where his tour group found fragments of stones and shards of broken pottery in piles on the ground,” Fitton’s family wrote in a statement.

The statement goes on to add that “tour members were told that this would not be an issue, as the broken shards had no economic or historical value.”

According to Middle East Eye, the man in charge of organizing the tour had a stroke at the end of the trip and died one month later, on 22 April, in a hospital in Baghdad.

Attempts to evacuate the 85-year-old British veteran from the country before his death were thwarted after authorities discovered the stolen artifacts.

During both US-led wars against Iraq – in 1991 and 2003 – thousands of priceless historical relics were looted from the country.

Last year, an ancient Mesopotamian tablet containing the Epic of Gilgamesh was returned to Iraq after being stolen and illegally exported from Iraq by the US during the first Gulf War.