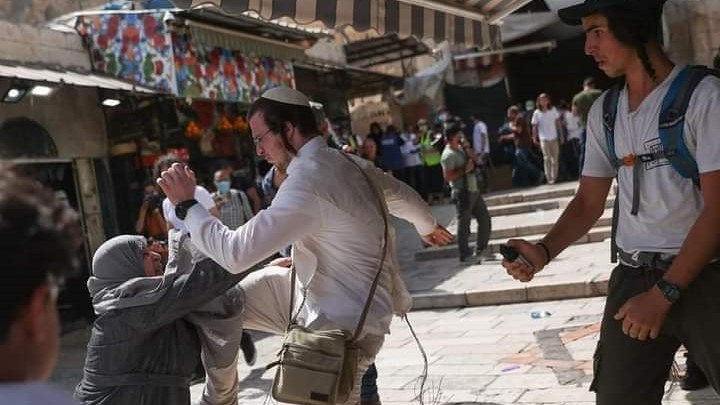 The controversial Israeli Flag March kicked off in the afternoon of 29 May across two routes, one of which crossed through Jerusalem’s Muslim quarter.

Violence against Palestinians, racist chants against Arabs, insults against the Prophet Muhammad, and other provocative actions occurred during the march.

The Israeli establishment, meanwhile, is on high alert after resistance movement Hamas warned that “all scenarios” are on the table.

Thousands of Israeli settlers joined the procession after having stormed the compound of Al-Aqsa Mosque hours prior.

Al Mayadeen stated that a record 1,678 Israeli settlers stormed the Islamic holy site, according to Sheikh Omar al-Kiswani, who added such a number has not been seen since 1967.

Thousands of Israeli settlers have started the Flag March in occupied Jerusalem. pic.twitter.com/vJYDghTny3

An Israeli settler spits at an old Palestinian woman during a provocative march in Jerusalem today. pic.twitter.com/A43whGH37X

Crowds chanted insults, including racist ones that called for a genocide of Arabs.

One Israeli settler was recorded on video taunting journalists over the murder of Shireen Abu Aqla, the Palestinian-American journalist who was murdered by Israeli occupation forces on 11 May.

Today in Israel, the jewel of the western world:

– “May your village burn down”

After having joined in the storming of Al-Aqsa Mosque, extremist Member of Knesset (MK) Itamar Ben Gvir joined in the Flag March.

In response, the Palestinian inhabitants of occupied Jerusalem fought back against attacks by Israeli settlers, as well as flying the Palestinian flag and chanting slogans against the Israeli occupation and Palestinian Authority.

Palestinian flag hovering above the ‘Western Wall’ in Jerusalem pic.twitter.com/WOY6RPW1yi

This brave old man has wrapped it up: Damn you [Zionist Settlers], Bennett, and Mahmoud Abbas!
👏 #VideoOfTheDay #FreePalestine#Jerusalem pic.twitter.com/lLGgBf5SuL

Earlier, during the assault of Al-Aqsa Mosque, and for the first time in history, Israeli settlers performed provocative Talmudic rituals inside the courtyard.

Israeli settlers hold a prostration ritual during the ongoing provocative tour into the Al-Aqsa Mosque compound in occupied Jerusalem. pic.twitter.com/JnWKtAyroy

Jewish worship is not permitted in the Al-Aqsa Mosque compound according to Israeli law, and it is also forbidden by the Chief Rabbinate of Israel.

The last time the Flag March took place, in May 2021, an 11-day war broke out between Palestinian resistance groups in the Gaza Strip and occupation forces. The violence resulted in the deaths of over 260 Palestinians and the destruction of large sections of the besieged strip.