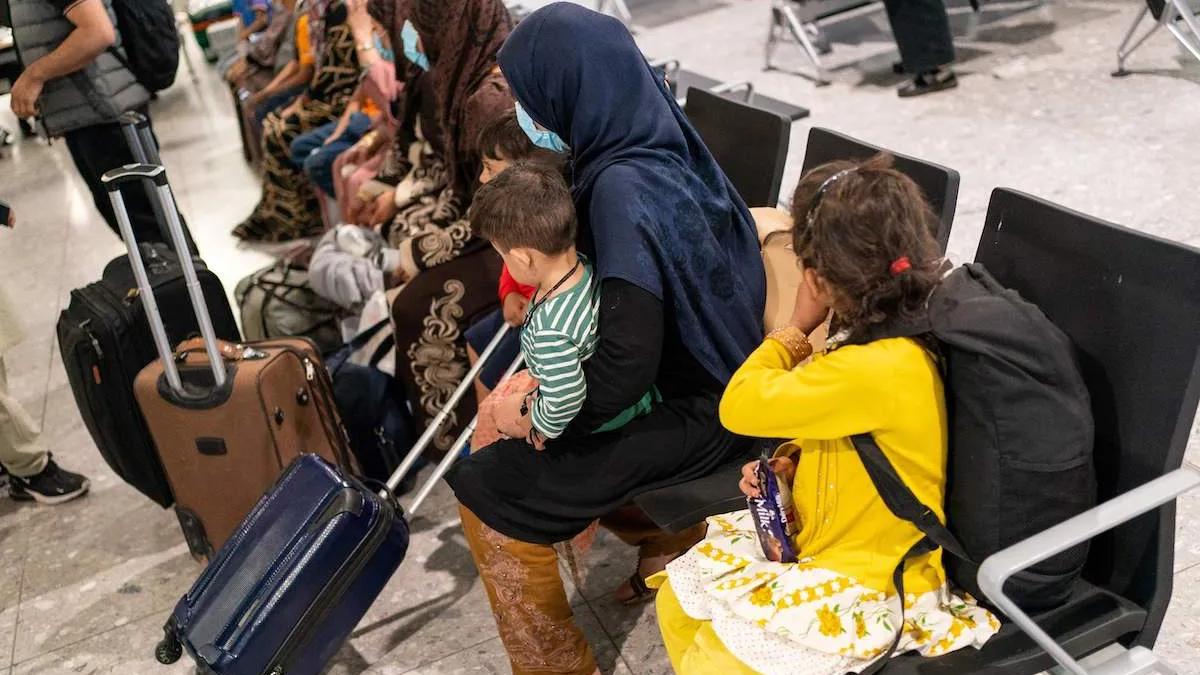 Afghan refugees after arriving on an evacuation flight from Afghanistan, at Heathrow Airport, London on 26 August 2021. (Photo credit: DOMINIC LIPINSKI/POOL/AFP via Getty Images)

Afghan refugees in the UK have found themselves stuck in British hotels for close to a year since their evacuation with no end in sight, according to reports from several UK news outlets including The Yorkshire Post and The Big Issue.

The refugees fled Afghanistan following the withdrawal of foreign forces from the country, the result of the Taliban insurgency.

Investigations into the current living conditions of Afghan refugees in the UK found that the government pays £1.2m per day for over 10,000 refugees to be kept in hotels, indefinitely waiting for permanent housing.

According to The Big Issue, not a single refugee has been rehoused for a month and a half.

Many refugees are being kept in hotels near Selby and Scarborough, which are far away from larger cities and have very limited transportation. The refugees are also tightly restricted in what they can do and where they can go within the hotel grounds.

“We are are getting depressed because we are so disconnected from society,” one Afghan refugee told The Big Issue.

The isolation is taking its psychological toll on the refugees, and impeding opportunities to search for jobs or attend schools.

According to The Yorkshire Report, these findings will be presented to the North Yorkshire County Council next week.

The report mentions that Whitehall officials were repeatedly informed of the inappropriate living conditions for Afghan refugees, but continued to send more refugees to stay in these remote hotels.

“They’re dumped in a hotel in Selby with no facilities, no buses, nowhere to go. These people risked their lives working with us, for us,” Councillor Davis stated.

The treatment of Afghan refugees, many of whom worked with companies and entities affiliated with the UK government during the occupation, comes in stark contrast to the British government’s claim to have offered refugees a “warm welcome.”

At the time, British lawmakers condemned the rapid withdrawal of troops as a “betrayal” of their allies in the region.

In Germany, they have faced evictions from their temporary housing facilities to make way for Ukrainian refugees.

UNICEF has reported that over a million Afghan children are at risk of acute malnutrition as a result of this crisis.