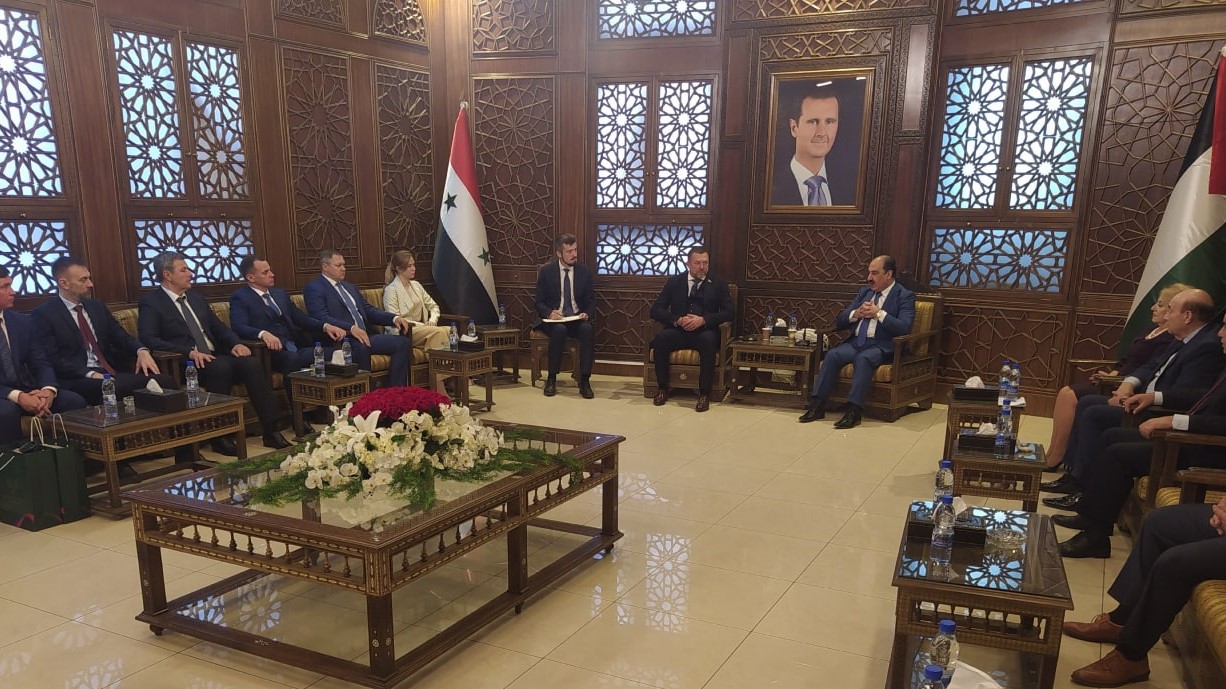 Delegation from the Donetsk People’s Republic meets with the Deputy Secretary General of the ruling Syrian Baath Party in Damascus on 14 June 2022. (Photo credit: DPR MFA)

Syrian President Bashar al-Assad has announced the beginning of the process for Syria to formally recognize Donetsk and Luhansk, the two republics in the Donbass region of eastern Ukraine.

President Al-Assad made the announcement upon receiving a high-ranking delegation from the Donetsk People’s Republic (DPR) on 16 June.

Days prior to the Russian special military operation in Ukraine that has since become a protracted war, the Syrian Arab Republic had informally recognized the two republics, following Moscow’s recognition of their independence.

“Syria supports President Vladimir Putin’s decision to recognize the republics of Luhansk and Donetsk and will cooperate with them,” Syrian Foreign Minister Faisal Mikdad said during a speech at the Valdai Discussion Club in Moscow in February.

President Al-Assad highlighted the common ground between Damascus and the Donbass region in their fight against the US and other western countries. He said he hoped for the liberation of the remaining Donbass territories occupied by Ukrainian forces and for the speedy restoration of peace.

The Syrian president informed the delegation that Damascus had begun the process to formally recognize the two republics.

The delegation included DPR Minister of Foreign Affairs Natalia Nikonorova, who welcomed the decision by Syria to recognize the Donbass republics.

According to the DPR foreign ministry statement, Nikonorova invited Syria to take part in an international tribunal against representatives of Ukrainian armed groups who stand accused of committing war crimes and human rights abuses on the people of the Donbass region.

Among the foreign mercenaries fighting on the side of Kiev are several militants who formerly belonged to ISIS, Hayat Tahrir al-Sham (HTS), formerly the Syrian branch of Al-Qaeda, and other rebel groups who are fighting against the Syrian government.

HTS leader Abu Mohammad al-Julani reportedly oversaw the release and transfer of 30 prisoners from HTS jails in Idlib, Syria to the frontlines of Ukraine in the fight against Russia.

The HTS militants first arrived in Ukraine via Turkey on 8 March, with a reported 450 militants making up this first wave of transfers.

In an interview with Russia Today (RT) on 9 June, Syrian President Bashar al-Assad praised the repositioning of the Kremlin on the global scale, saying Russia has restored a much needed international balance.

“We can look at Russia from two angles: the angle of the ally who, if he wins a battle or if his political position on the world stage becomes stronger, is beneficial for us; and from another angle, Russia’s strength today constitutes a restoration of balance,” President al-Assad said.