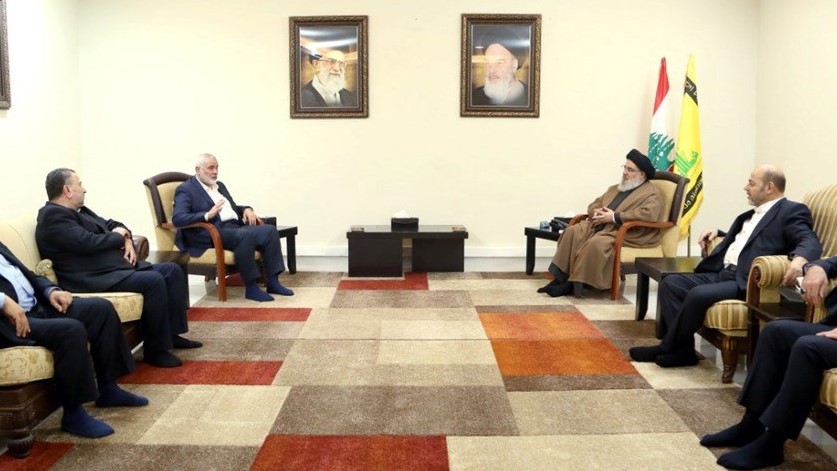 The two leaders discussed political and field developments that affect both Palestine and Lebanon, the development and cohesion of the Axis of Resistance, threats from adversaries, challenges, and opportunities.

The two resistance leaders placed special emphasis on the development of cooperation between all groups that comprise the Axis of Resistance throughout West Asia, especially in relation to their central goal of protecting Jerusalem and liberating Palestine from Israeli occupation.

Haniyeh is set to meet with various Lebanese officials and leaders, as well as representatives of the various Palestinian resistance groups and political parties within Lebanon. Haniyeh will also assess the current living conditions of Palestinian refugee camps.

The visit of the Hamas politburo leader comes amid reports that the long-strained ties between Hamas and the Syrian government will finally be restored.

According to a report by Reuters, Hamas is expected to soon resume ties with Damascus, setting aside the long breakup with Syria.

The visit by the Hamas leader also coincides with the political chaos taking place in Israel, with the coalition government of Naftali Bennett in Tel Aviv opting to disband after a little over one year in power.

The decision to dissolve the Knesset also comes amid concerns among various Israeli factions that former prime minister Benjamin Netanyahu could return to power.

According to a number of surveys published on 21 June, Netanyahu’s far-right Likud party and its allies have been leading the polls, yet still fall short of being able to form a majority.

Recently, the Likud has been ramping up its campaign and promising strict new laws in the event that it is elected. The Likud is also reinforcing the strong anti-Arab sentiment that it has relied on in previous elections.

In May, Hamas military commander Mohammed al-Sinwar revealed that during the 11-day Sayf al Quds (Sword of Jerusalem) battle of 2021, Lebanese Hezbollah and Iran’s Islamic Revolutionary Guard Corps (IRGC) were present in their joint command room.

It is unclear where this joint command room was located or whether Hezbollah and IRGC representatives were physically or virtually present. The Hamas military commander only revealed that Hezbollah and IRGC were present for the entirety of the 11-day war.

Al-Sinwar noted that their allies in the Resistance Axis, namely Hezbollah and IRGC, had supplied them with intelligence on sensitive Israeli targets.

“We dealt the biggest slap in the face by striking Tel Aviv, and we broke the stature of the center of injustice,” Al-Sinwar declared.

The Hamas military commander also revealed for the first time that at the very end of the operation, the resistance had planned the launch of 362 missiles on 14 locations, including Haifa, Tel Aviv, Eilat, and Dimona, the site of Israel’s semi-secret nuclear weapons program.

The plan was never carried out and a ceasefire was announced.

Regional resistance leaders have warned that any existential threat to Al-Aqsa Mosque would lead to armed retaliation, not just by Palestinian resistance groups, but also by regional forces.