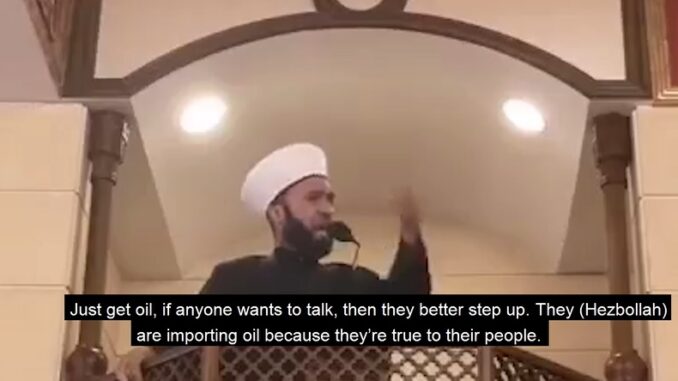 Sheikh Hamade, the Imam of the Hamzah Mosque in Beirut, blasted pro-US voices in Lebanon and called on anyone opposing the move to “quit trying to fool the Lebanese people” and “get oil yourselves.”

The clip of the Sheikh’s comments spread widely within Lebanese social media circles, as increasing numbers of citizens and politicians are asking why it matters where the fuel comes from.

The following is a transcript of the viral video:

Shiekh Hamade: “(Certain) media outlets don’t want Iranian oil, nor oil from God knows where. We, as a people, demand that you bring oil from wherever you want, and we’ll buy it from you and not from them.

Just get oil, if anyone wants to talk, then they had better step up. They (Hezbollah) are importing oil because they’re true to their people.

Regardless of halal (permissible) or haram (forbidden), right or wrong, sanctions and what not – are there sanctions more devastating than the ones we’re under (today)?

Are you going to tell me that when and if the oil comes from Iran, that you’re going to prevent me from getting Iranian petrol and diesel? We’re already dead.

Go and see Dahieh (southern suburbs of Beirut), and all Shia regions, and see Beirut and all Sunni regions in Lebanon. Go and see Akkar, Dinniyeh, and Tripoli. Go and see Baalbeck and Hermel, central and northern Beqaa. Go to the south, all of it, starting from Sidon and up to the Naqoura, and see the hunger. Head to the mountains, to Baabda and all of Mt. Lebanon. People care little for where the oil comes from. When the oil is here, people will pay out of their own pockets for it, and they don’t need any of you officials. They’ll pay from their own money and bring in oil from wherever, because you do not feel the exhaustion we feel. Because you do not feel the humiliation we’ve endured.

People won’t fall for this any more. They want to live. They’re tired. They’re exhausted.

I pray that God Almighty save us from this trial. May God grant us forgiveness.”