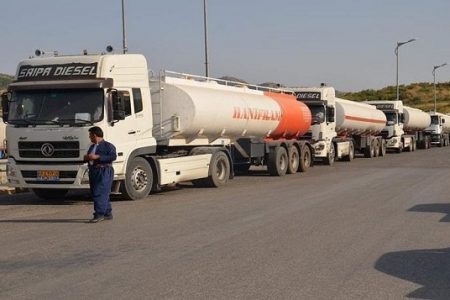 On 5 September, the Syrian Observatory for Human Rights (SOHR) reported that a convoy of 39 fuel tankers had entered Syria from Iraq using border crossings controlled by Iranian-backed militias.

According to the report, the convoy was spotted entering Syria via the Al-Mayadin and Albu Kamal border crossings in the eastern countryside of Deir Ezzor. From here, the tankers reportedly took the road to Homs Governorate, located near the Lebanese border.

It is believed that these tankers are on their way to Lebanon with much-anticipated Iranian fuel secured by the Lebanese resistance movement Hezbollah last month.

Since the announcement of the acquisition, at least three ships have set sail from Iran carrying the fuel, but in order to circumvent US sanctions, they were expected to dock in Syria before transferring the fuel to tanker trucks that would carry it onward to Lebanon.

According to the SOHR, Sunday’s convoy was the second one to enter Syria using the same route over the last seven days. On 29 August, the UK-based organization also reported that “about 50 tankers loaded with gasoline from Iraq entered Syria through the Albu Kamal crossing in the Deir Ezzor countryside under the protection of the 4th Division forces, and according to sources, the tankers were headed toward Lebanon.”

The news comes just days after a high-level delegation of Lebanese officials visited Syria to discuss the importation of gas and electricity from Egypt and Jordan using Syrian infrastructure – this, as part of a US-promoted plan to counter Hezbollah’s Iranian fuel option.

Lebanon is undergoing a major energy crisis that has left most of the country without access to fuel and has caused severe rolling blackouts that can last for up to 22 hours per day.