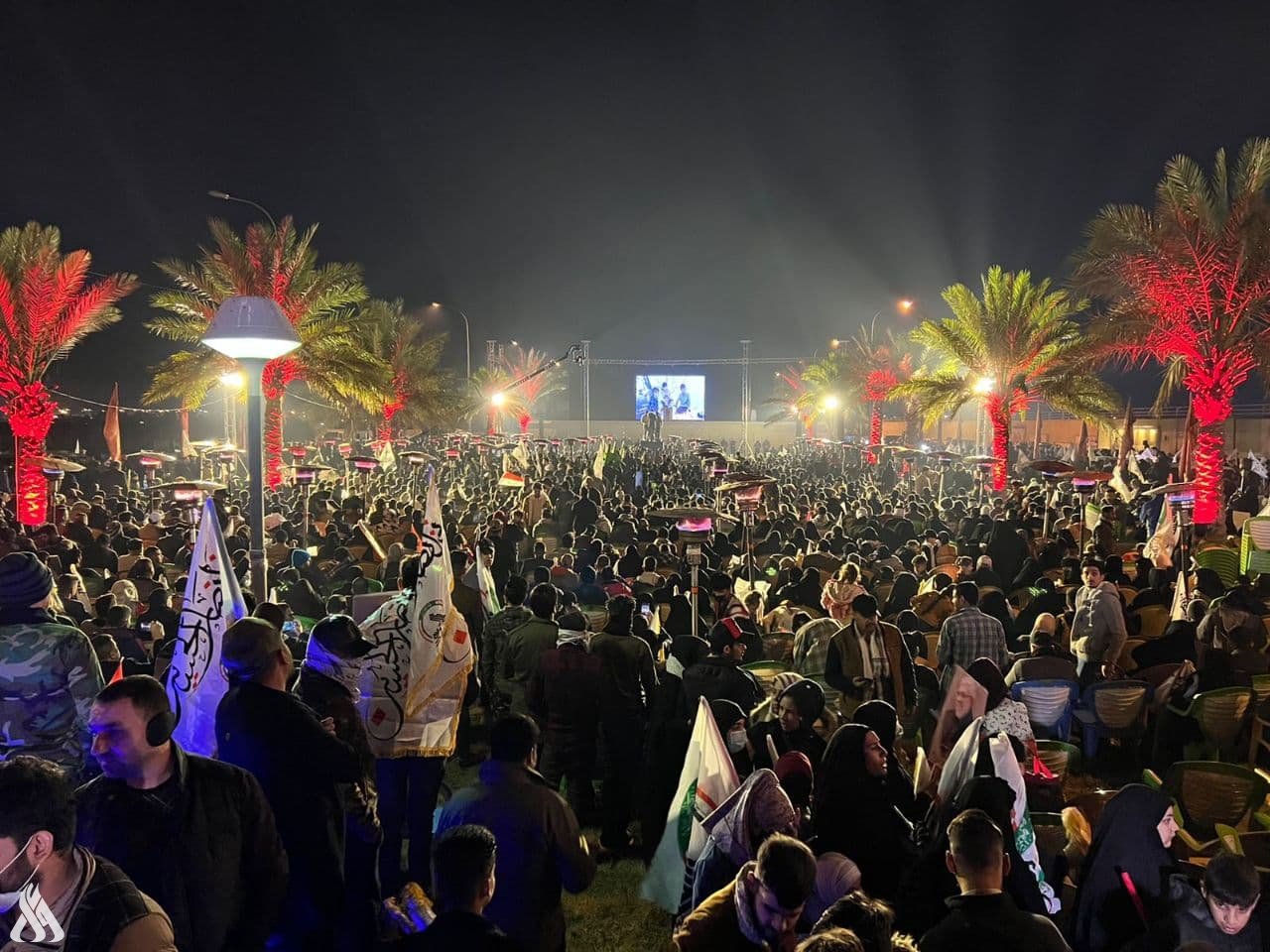 Thousands of Iraqis gathered in Baghdad airport to demand a full US withdrawal. (Photo credit: INA)

On 2 January, tens of thousands of Iraqis gathered in Baghdad International Airport – the site where Iranian Major General Qassem Soleimani and Iraqi leader Abu Mahdi al-Muhandis were assassinated on 3 January, 2020 –  to commemorate the second anniversary of their assassination.

Prominent figures, such as Faleh al-Fayyad, leader of the Popular Mobilization Unit (PMU) resistance faction, as well as the families of martyrs Soleimani and Al-Muhandis attended the ceremony.

Faleh Fayyad spoke at the gathering, saying that the Iraqis will remember the “leaders of victory, and we raise our generations on the noble values ​​they carried, and the leaders of victory were ready for martyrdom every minute and every moment.”

Referring to a massive gathering on 1 January in Baghdad, Fayyad said that the people who came out on Saturday declared loyalty to those who sacrificed their existence and their blood.

The PMU leader said that the Iraqi people hold the United States accountable for the “heinous crimes” against them and their country during the invasion of Iraq in 2003.

“What happened after [the war on Iraq] created a new situation, and Iraq will no longer accept the presence of US forces,” Fayyad said.

Manar Al-Muhandis said that Iraqis will not remain silent about “the Americans of the US and their cowardice,” and that “we will avenge every drop of blood shed in Iraq, Yemen and Syria.”

Zeinab Soleimani spoke of her father’s deep affection for Iraq, saying that martyr Soleimani knew that a strong Iraq would become a “thorn in the eyes of the enemy.”

Zeinab Soleimani also spoke of an impending “harsh revenge” against the murderers “whose hands were stained with blood.” She also said that Iranians and Iraqis will never forget the assassinations and the blood spilled at the Baghdad airport.

“Martyr Soleimani is an eternal reality who will live on forever. His assassins – including Trump and his ilk – will go down in the garbage bins of history, after receiving retribution for the crime they committed,” Khamenei said, who also said that Soleimani will never be forgotten.

Soleimani and Al-Muhandis were assassinated by a precision strike which former US president Trump personally authorized.

The attack occurred near Baghdad airport as Soleimani was returning from a trip to neighboring Syria. He was received by Abu Mahdi al-Muhandis, his longtime friend, who played a key role in trouncing the ISIS terrorist group.

As usual, after a brief exchange of greetings, the two men left the airport in their motorcade to head to meetings in Baghdad.

A US drone hovering near the airport fired missiles that hit General Soleimani and Al-Muhandis as well as others in the motorcade.

Iran responded a day after the assassination by hitting Ain al-Assad, a US base in Iraq. Early reports indicated that no US soldiers had been killed, but that the strike had inflicted heavy damage on the infrastructure of the base.

In the US vice-presidential debate in October 2020, Kamala Harris, Joe Biden’s pick for VP, told Mike Pence that many US soldiers in Ain al-Assad base suffered from brain injuries caused by Iran’s retaliatory strike.

A Resistance Axis security source exclusively confided to The Cradle that the Resistance has retaliated against the killers of the top Iranian and Iraqi commanders.

The source outlined that an operation in Erbil killed two high-ranking US and Israeli commanders. The first was Lt. Col. James C. Willis, 55, of Albuquerque and of the Red Horse Unit, a US commander killed in an operation in Erbil, although according to a Pentagon report, he died in a ‘non-combat incident’ at Qatar’s Al-Udeid base. This person was involved in the assassination of Soleimani and Abu Mahdi Al-Muhandis.

The second person involved in the assassinations, according to the source, and to have been killed in Erbil was Israeli Col. Sharon Asman of the Nahal Brigade. Officially, Asman is said to have died of ‘heart failure.’ The source did not elaborate on the timing of these operations.

On 30 December 2021, Deputy Head of the Judiciary of Iran, Kazem Gharibabadi said that Iran has identified 125 individuals who were involved in the assassination of Iran and Iraq’s top commanders.

He also noted that Donald Trump was one of those 125 individuals, and that Iran has prepared arrest warrants for 40 of them.