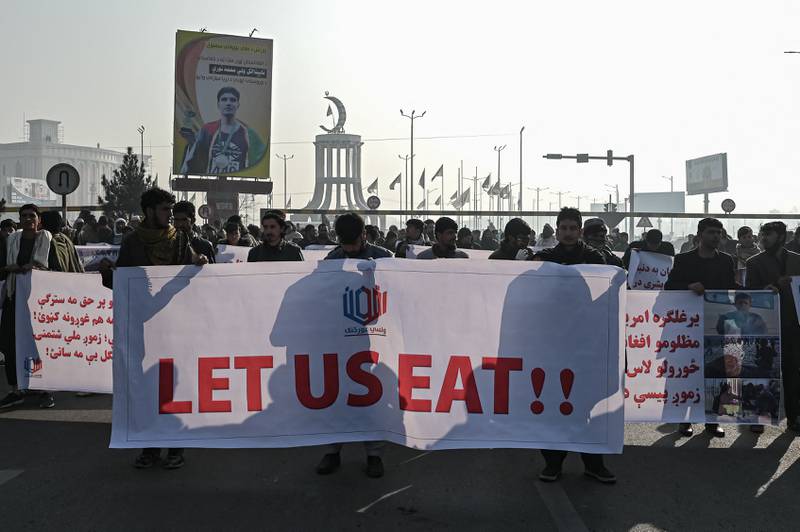 File photo. Protesters outside the US embassy in Kabul, Afghanistan on 21 December demanding the release of Afghanistan’s foreign reserves. (Photo credit: AFP)

On 13 January UN Secretary General Antonio Guterres echoed his appeal to the US to release billions in Afghanistan’s foreign reserves that the White House has blocked.

The UN Chief said the continued freezing of the foreign reserves is worsening the acute humanitarian crisis the war-torn country is facing.

He pointed out that a combination of sanctions and freezing temperatures has pushed millions of Afghans to the ”verge of death.” He emphasized that ”rules and conditions that prevent money from being used to save lives… must be suspended in this emergency situation.”

Freezing temperatures and frozen assets are a lethal combination for the people of Afghanistan.

We must do even more to rapidly inject liquidity into the economy and avoid the looming meltdown that would lead to poverty, hunger and destitution for millions. pic.twitter.com/S9IA4VWaDj

The US government placed sanctions on Afghanistan and froze nearly $10 billion of the country’s foreign reserves in August 2021, following the Taliban’s victory in the 20-year war.

The two measures have devastated the economy of the country leading to what the UN has described as the world’s fastest-growing humanitarian crisis.

This crisis has been exacerbated by the fact that the military occupation of the country by the US destroyed Afghanistan’s economic systems and infrastructure, leaving the country dependent on international aid for over 75 percent of its national budget.

However, even this support was immediately withdrawn when the western-backed government was dislodged from power by the Taliban in August.

According to the UN, over 22 million people in Afghanistan, or about half of the country’s population are food insecure and in desperate need of aid.

On 21 December the UN Security Council voted unanimously to give sanctions exemptions to the World Bank to allow it transfer $280 million to the World Food Program (WFP) and UNICEF to enable them to carry out humanitarian work in Afghanistan.

Some stakeholders have however argued that this amount is too little to tackle the deepening humanitarian crisis. They say the only long-term solution is the lifting of the sanctions and allowing the government to have access to the country’s foreign reserves.