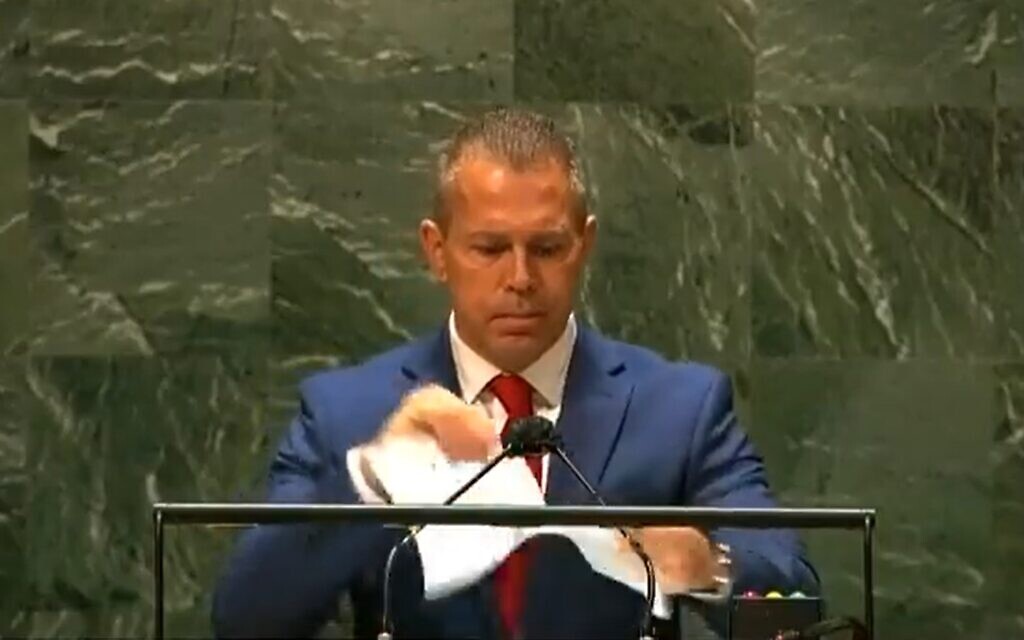 File image. Israeli envoy to the UN Gilad Erdan tears up a report by the UN Human Rights Councils at the podium of the UN General Assembly on 29 October 2021. (Photo credit: UNTV)

On 26 January, US media outlet Axios revealed a ploy by the Israeli government to discredit a commission appointed by the United Nations to investigate alleged violations of international law by Israeli occupation forces during their siege of the Gaza Strip in May 2021.

The report by Axios is based on the contents of a classified diplomatic cable that the Israeli foreign ministry has dispatched to its diplomatic missions across the world.

According to the report, the cable stated that the Israeli foreign ministry is about to embark on a diplomatic campaign to discredit or attack the findings of the commission.

It also called on all diplomatic stations to be on standby to take part in the campaign against the commission. The commission is likely to bring to light the crimes committed by the Israeli occupation during the brutal siege of the Gaza strip that killed 260 Palestinians, including children and women.

The motion to set up the commission was adopted by a special session of the UN Human Rights Council on 27 May 2021.

Twenty-four members of the council voted in favor of the resolution, nine voted against it, while 14 abstained from the vote.

Israel and the United States vehemently opposed the setting up of the inquiry commission. The two countries claimed that the commission was going to be biased against Tel Aviv.

Israel and the US allege that this is due to the decision by the commission not to investigate what Tel Aviv calls ”crimes” committed by Palestinian resistance group, Hamas.

Tel Aviv has, for decades, accused the UN of having an “anti-Israel bias.” UN teams tasked with investigating human rights violations against Palestinians have typically been subjected to a hostile reception by Israeli authorities, including being denied access to the occupied Palestinian territories.

In October 2021, Israel’s ambassador to the UN Gilad Erdan tore up the UN Human Rights Council annual report while on the podium of the UN General Assembly, claiming that the report was biased against Israel.