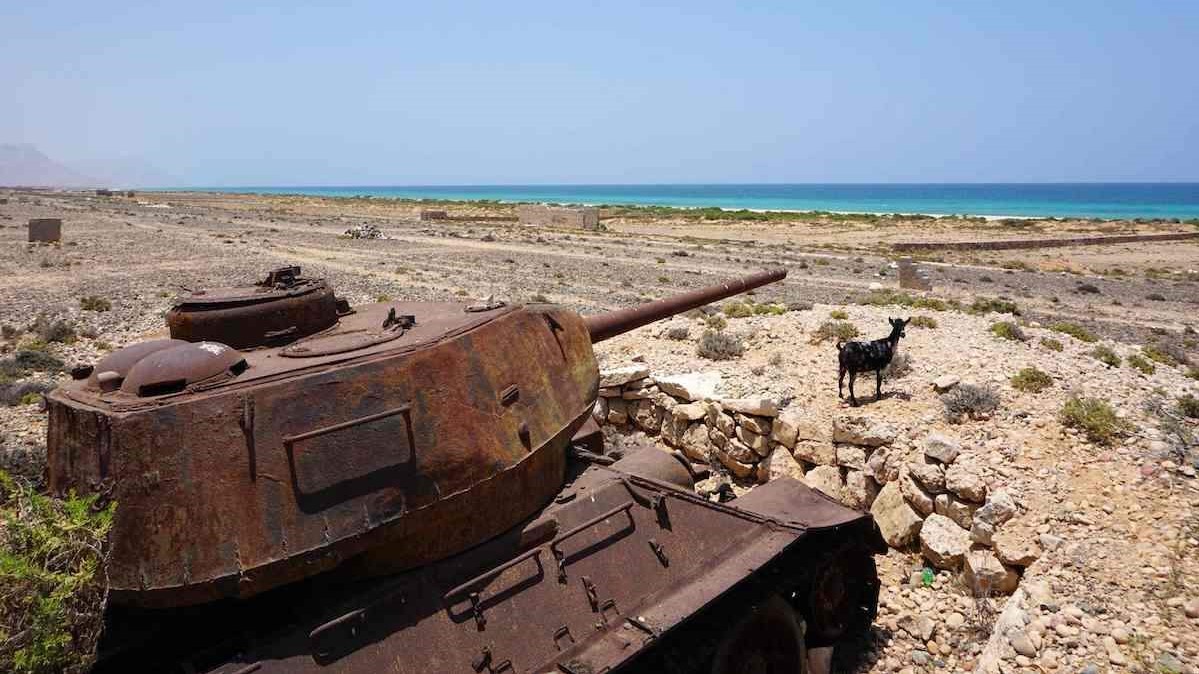 A Soviet-era tank rusts on the coast of the Yemeni island of Socotra. (Photo credit: AFP)

A  UAE-backed construction project is being developed on Yemen’s Socotra Island for the purposes of hosting Israeli soldiers, officers, and other military experts and personnel, according to a report by Yemen News Portal on 8 March.

The report, citing anonymous sources, states that the joint Emirati-Israeli base on the strategic island will have housing units built for Israeli officers under the auspices of the Khalifa bin Zayed Institute.

This is allegedly part of a plan to turn the Yemeni island into a center for regional espionage as well as increasing military control over maritime routes.

In September 2021, Yemen News Agency reported that the UAE and Israel were setting up a military outpost on Socotra Island. The purpose of this joint outpost would be to gather intelligence for the Israeli military.

Socotra Island recently made headlines due to the controversy of Israeli tourists visiting the Yemeni island under a UAE-issued visa.

Socotra is a strategic island located near the Bab al-Mandab Strait. The strait is a flashpoint for potential confrontation between Israel and Iran.

In December 2020, the Washington Institute published an analysis titled ‘Submarine Movements on Iran’s Doorstep,’ examining how Israeli submarines, which have the capability of being armed with nuclear warheads, are able to pass through the Suez Canal and then, from positions in the Persian Gulf near Yemen and Oman, can strike Iran with conventional or nuclear warheads.

Israel’s advanced Dolphin II submarine can remain submerged for up to thirty days owing to its air independent propulsion (AIP). It can also reportedly carry cruise missiles with an unconfirmed range of about 1,500 kilometers, armed with conventional or nuclear warheads. In theory, then, the vessel could threaten inland targets near Iran’s coast while standing off in the Arabian Sea, or even the sensitive Natanz and Isfahan nuclear facilities if it risked sailing further north into the Gulf of Oman.

Israel chose to send its submarine through Suez, which requires surfaced transit, to avoid circumnavigating Africa. The timing of the journey may have been coordinated with the [USS] Georgia’s transit, but more likely not, given the highly secretive nature of US submarine operations. Another possibility is that Israel timed the move to coincide with the Iranian navy’s change of guard in the Gulf of Aden. Iran’s Task Force 70 had already returned home, and Task Force 71 had just set off on December 19 to take its place, leaving the Gulf of Aden and northern Arabian Sea without an active Iranian naval asset for a few days.

One of the stated duties of Iranian naval task forces is to monitor potentially hostile activities in these waterways and the Bab al-Mandab Strait.