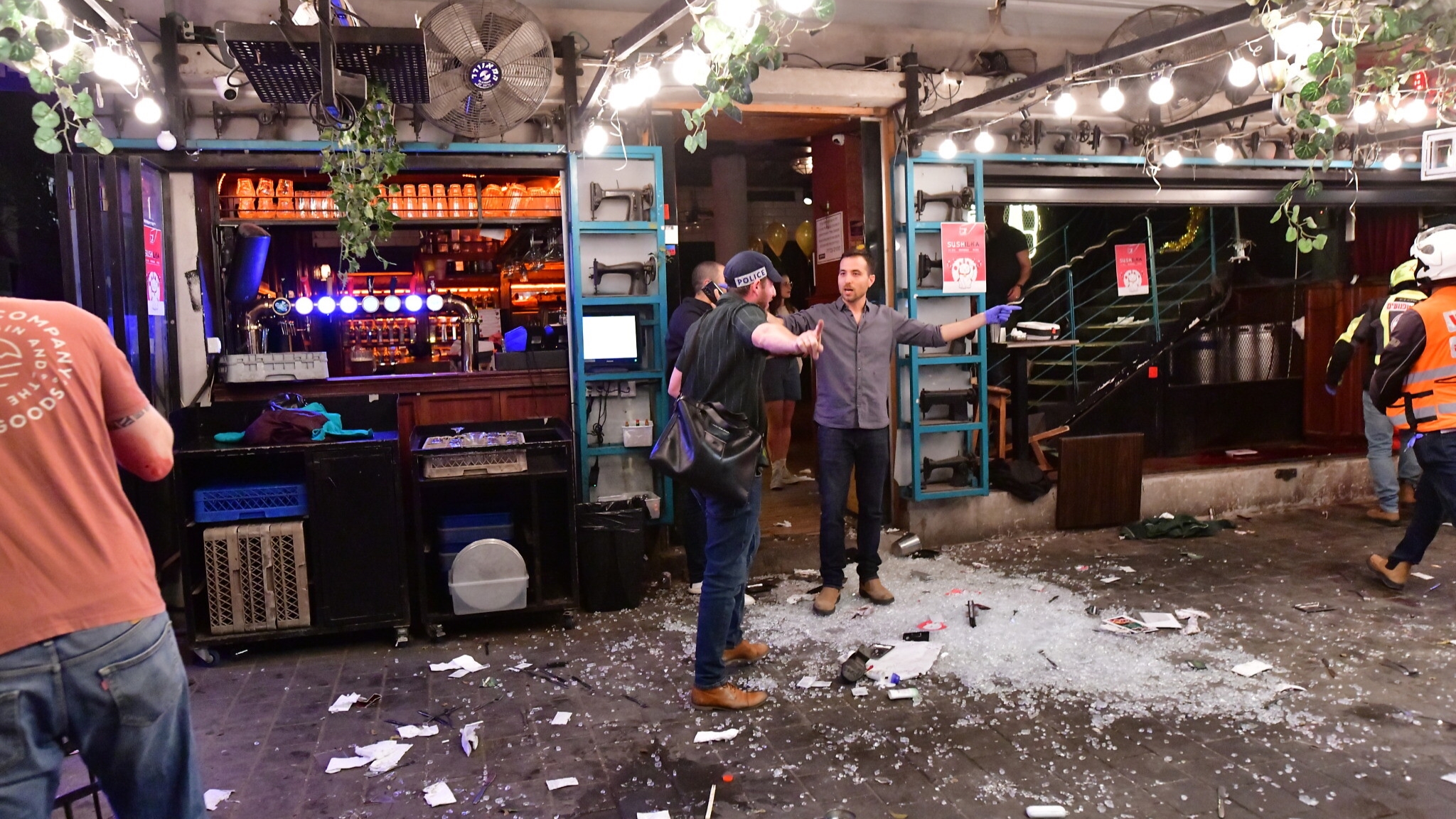 On the evening of 7 April, two Israelis were killed and 12 were injured during a shooting incident in the heart of the Israeli capital.

Videos shared across social media show people fleeing from the scene of the attack.

Shin Bet identified the perpetrator as a 28-year-old Palestinian from Jenin in the occupied West Bank, who they said had entered Tel Aviv “illegally.”

The suspected gunman was shot dead by police near a mosque in Jaffa early on 8 April after a massive manhunt by hundreds of occupation officers and army special forces who searched building by building.

No group has claimed responsibility for the attack.

On 2 April, occupation forces killed three Palestinians during a shootout in Jenin, just hours after resident commemorated the 20-year anniversary of a brutal Israeli assault on the refugee camp that has become emblematic of the occupation.

Over recent weeks, Palestinians have ramped up retaliatory attacks against Israeli forces and settlers, carrying out a series of operations that have left at least 11 Israelis dead since 22 March.

Eight Palestinians have been killed during the same period.

In the wake of the latest attack, Israeli Defense Minister Benny Gantz said Tel Aviv would broaden its operations against the “wave of terror” and that the attackers and those who send them would pay a “heavy price.”

Palestinian resistance factions have praised the latest retaliatory attack against the occupation, with Hamas officials calling it “a natural and legitimate response to the escalation of crimes by the occupation against our people, our land, Jerusalem and Al-Aqsa Mosque.”

This attack took place just two days after occupation officials announced that Palestinian males between 12 and 40 would be banned from praying in Al-Aqsa Mosque during Friday prayers throughout the month of Ramadan.

Amid the rise in tensions between settlers and Palestinians, applications for firearm permits have skyrocketed in the occupied territories.

Keywords
attackBenny GantzHamasIsraelJeninNaftali Bennettoccupation forcesPalestinePassoverRamadan
More news
Syrian Kurds halt operation against ISIS
Nov 26, 2022
US mediating between Ankara-SDF to prevent ground offensive: Report
Nov 26, 2022
US base comes under missile attack in northern Syria
Nov 26, 2022
Pakistan invites Turkey to join economic corridor with China
Nov 26, 2022
PreviousNext
Syrian Kurds halt operation against ISIS
General Mazloum Abdi blamed the US for not having done enough to stop the Turkish cross-border operations in Syria
Nov 26, 2022
US mediating between Ankara-SDF to prevent ground offensive: Report
According to a Kurdish media report, Ankara has asked for a cut of the oil revenues from SDF-controlled areas as a condition for withdrawing from plans of a ground invasion
Nov 26, 2022
US base comes under missile attack in northern Syria
Local tribes have increasingly become more dissatisfied with the presence of illegal US troops in the region, which is centered around plundering natural resources
Nov 26, 2022
Pakistan invites Turkey to join economic corridor with China
Pakistan and Turkey consider their economic and military cooperation a cornerstone of deterrence against foreign enemies
Nov 26, 2022
Qatar reconsiders London investments in wake of grandstanding ban over ‘LGBT+ concerns’
Qatar has invested an estimated $40bn in the UK, owning British landmarks like Harrods, the Shard building, Chelsea Barracks, as well as a 20 percent stake in Heathrow airport
Nov 26, 2022
US offers support to Iraq in confronting threats to Kurdistan region
Iran accuses the Kurdish region of Iraq of harboring the masterminds of violent unrest in the country, while Turkey blames Kurdish militias based out of northern Iraq and Syria for a terror attack in Istanbul
Nov 26, 2022
Azeri president denounces France’s position on peace talks with Armenia
The French Senate called for sanctions on Baku, as Paris recognizes the Republic of Nagorno-Karabakh, and is urging Azerbaijan to withdraw from Armenian territory
Nov 25, 2022
Turkey in final stages of talks for up to $10bn funding from Qatar: Report
One of the officials said the total funding could take the form of a swap, Eurobond or other method
Nov 25, 2022
Government formation talks in Israel to allow for ‘soft annexation’ of West Bank
Benjamin Netanyahu has reportedly agreed to allow Israel's leading supremacist group control of the occupied West Bank
Nov 25, 2022
UAE disguises new military base in Yemen as civilian airport
The new military airport, which has replaced a former Emirati base in Eritrea, will serve as a logistical supply hub
Nov 25, 2022
PreviousNext
Most Popular
No pain, no grain: Putin’s Black Sea comeback
BY Pepe Escobar Nov 02, 2022
The Huseynyun: Iran’s challenge in forming a ‘Hezbollah of the Caucasus’
BY Yeghia Tashjian Nov 04, 2022
Switzerland finds no reason to label Hezbollah a terrorist organization
Nov 05, 2022
Imran Khan shot in apparent assassination attempt
Nov 03, 2022
The Gray Wolf returns to Central Asia: Turkey’s ambitions for the region
BY Erman Çete Nov 01, 2022