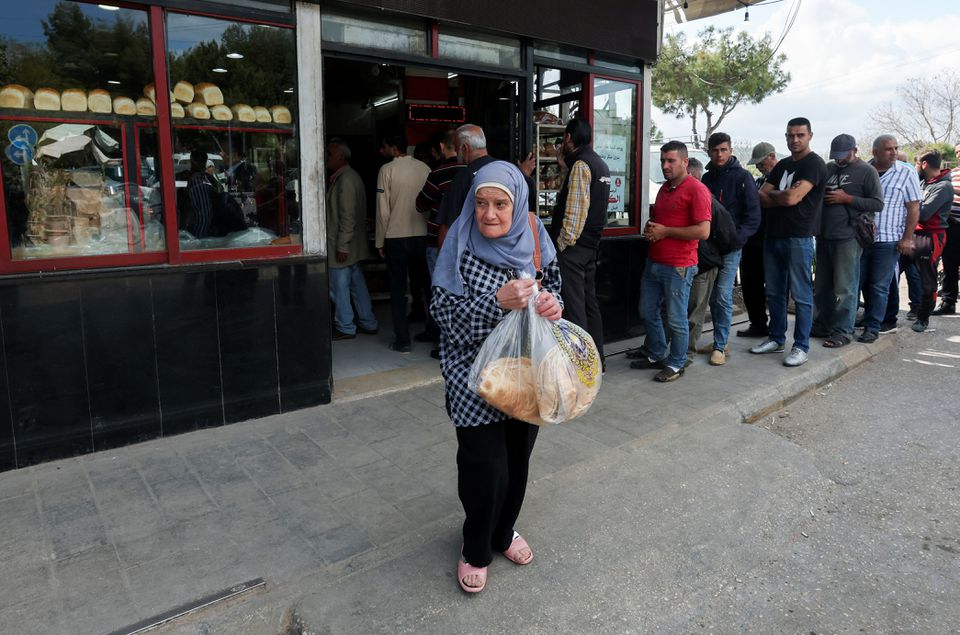 A Lebanese woman carries bread in the midst of long lines outside a bakery in Sidon, southern Lebanon 12 April 2022. (Photo credit: REUTERS/Aziz Taher)

In a last minute effort to avert a food crisis, the Lebanese government has disbursed $15 million to temporarily resolve dire wheat shortages, which reached their worst state on 11 April when bakeries ran out of wheat.

Speaking to Reuters, Minister of Economy Amin Salam said the funds would only be enough to secure wheat for a few weeks.

The disbursement of credits for purchasing wheat for bakeries will give Lebanon “a period of about two to three weeks before we need to open another credit line, which we had requested at $21 million,” Salam said.

When the various baker syndicates announced on 11 April that the wheat supply had run out and bakeries had closed, long lines began to form at bakeries, groceries, and other similar establishments.

The wheat shortage comes in the middle of the month of Ramadan, when Muslims abstain from food and drink from sunrise until sunset.

The crisis did not happen by accident. According to sources in the bakery industry, it is due to several man-made events.

One was the announcement that a wheat ship destined for Lebanon had its entire supply ruined by moisture, which was later found out to be false.

A major importer who procures and pays for wheat ships was mysteriously arrested on a very minor charge.

While the Central Bank of Lebanon (Banque du Liban) routinely falls behind on deadlines to extend credit lines, the bank also imposed new conditions on the government.

The Russia-Ukraine conflict has also added to the pressure.

Lebanon has been heading towards the cliff of a food crisis, compounded by an economic and monetary collapse resulting in triple-digit inflation.

A report by The Cradle investigated the implications of the Russia-Ukraine conflict on food insecurity in West Asia and beyond, noting how Syria used to be a significant producer of wheat before the US-backed rebel insurgency tore the country apart.

“Lebanon is one country likely to be hardest hit by the raging conflict. … Lebanon’s Department of Economy and Commerce is striving to find alternative wheat supplies, including imports from the United States, India, and Argentina. But these places are geographically much further afield, and with the sharp recent increase in oil and shipping prices, the Central Bank dollars provided to import wheat will fall short of required quantities.”

The Islamic Republic of Iran has offered to provide Lebanon with wheat supplies to ease the crisis.

In its various offers to Lebanon, from food to fuel, Iran has stated it would gladly accept Lebanese liras instead of dollars and euros, which Lebanon is running out of, due to massive trade deficits from its import-dependent economy with negligible domestic industries.