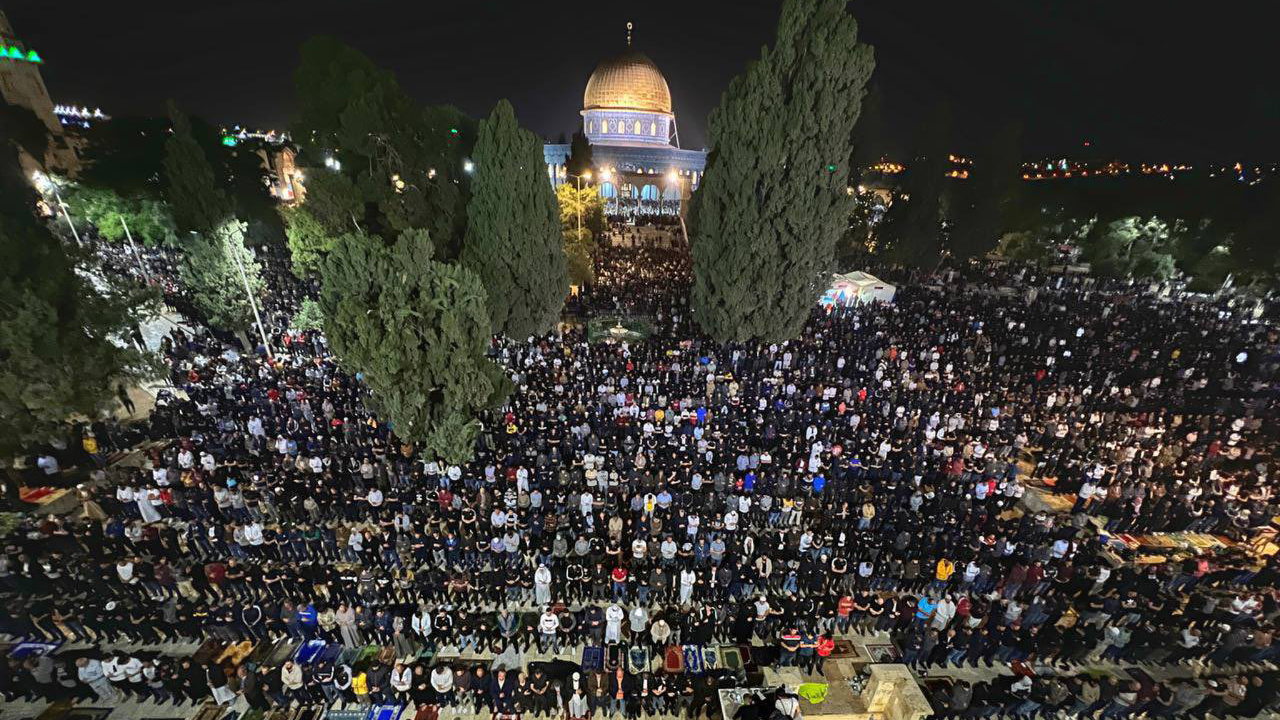 A large number of Palestinian worshippers pray at Al-Aqsa Mosque following the end of the holy night of Laylat al-Qadr (Night of Ordainment) on 28 April, 2022. (Photo credit: Al-Qastal News)

Israeli forces have yet again attacked Palestinian worshippers at Al-Aqsa Mosque, just hours after one of the holiest nights of Ramadan.

At dawn on 28 April, Israeli forces attacked worshippers who had gathered all night long for prayers and spiritual reflection in the Islamic holy site.

Laylat al-Qadr, or the Night of Ordainment, is considered the holiest night in the month of Ramadan and the entire Islamic calendar. It falls within the last 10 nights of the holy month.

A chapter of the Quran on this night states that a divine peace is with the worshippers until the break of the dawn.

Israeli forces attacked worshippers at dawn, just as the holy night came to a close.

The occupation troops encountered a large crowd of worshippers who had spent the night at Al-Aqsa Mosque. During the peak of attendance, an estimated 250,000 Palestinian worshippers were in attendance.

Israeli forces fired sound and gas bombs, and used small drones to fire tear gas on Palestinians. The use of these weapons led to several suffocations, prompting first aid responders to rush to the scene.

The Palestinian Red Cross reported 418 cases of injuries, including 23 who had to be hospitalized in intensive care units.

Two Palestinians were reportedly arrested during the raid.

On 22 April, thousands of Palestinians gathered in Gaza to protest the ongoing violations against worshippers in Al-Aqsa. Palestinian resistance factions have vowed to continue launching retaliatory strikes against Israeli settlements near Gaza, if Israeli forces continue to escalate the violence in the Islamic holy site.

On 27 April, a televised summit of regional resistance leaders pledged to defeat the Israeli occupation, warning that any existential threat to Al-Aqsa would cause a regional war to erupt, drawing in the participation of Lebanon’s Hezbollah, Yemen’s Ansarallah, and Iraqi resistance factions.