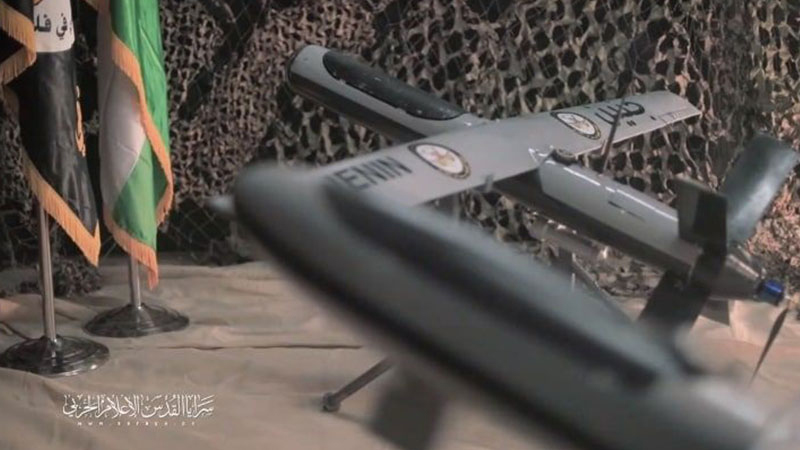 The military wing of Palestinian Islamic Jihad (PIJ), the Al-Quds Brigades, announced on 28 April that it has successfully produced a domestically manufactured combat drone. They have named the drone Jenin, after the Palestinian city of the occupied West Bank.

The drone is based on an earlier prototype that was used to attack Israeli military vehicles near the Gaza border in 2019.

Several photos and videos were released showcasing its design and performance.

Al-Quds Brigades releases footage of the “Jenin” combat drone which was completely manufactured inside Gaza. The earlier versions of the drone were used in an attack on IOF military vehicles near Gaza borders in September 2019 https://t.co/AG8a1ITAZ1 pic.twitter.com/zHCFGuCnaS

The spokesperson for Al-Quds Brigades, Abu Hamza, announced that the Jenin combat drone is currently in service and will be used in future retaliations against Israel.

Abu Hamza spoke of the strong relations between the Palestinian resistance factions and Iran, as well as with Yemen. He noted that any existential danger to occupied Jerusalem would turn into a regional war, echoing sentiments declared by Hezbollah Secretary General Sayyed Hassan Nasrallah in 2021.

“The Axis of Al-Quds possess the defensive and offensive capabilities which the enemy will suffer from,” the PIJ spokesperson said, in reference to the 27 April speech from the leader of Hezbollah on using the name Axis of Al-Quds as an alternative to Axis of Resistance.

Abu Hamza stated that the normalization of several Arab states is “humiliating,” but will not deter the power and might of resistance forces whose efforts are geared to liberating Palestine from Israeli occupation.

On 22 April, thousands of Palestinians gathered in Gaza to protest the ongoing violent Israeli crackdowns against worshippers in the Al-Aqsa Mosque.