Lebanese parliamentary elections are complicated, counter-intuitive and corrupt, but voters hoping for change will still trek to the polls this Sunday, despite the fact that results will almost certainly be challenged and negotiated.

Lebanon’s next general parliamentary elections will be held on 15 May amid significant local, regional, and global tensions.

The Lebanese parliamentary election is based on a complex ‘confessional system’ and takes place once every four years. It is the only ballot where citizens directly elect politicians.

The long-awaited 2022 poll comes after more than two years of unprecedented social and economic challenges. The Lebanese people have endured the freezing of their bank deposits and life savings since late 2019, resulting in a collapse of the Lebanese lira, a shortage of foreign currency, and hyper inflation, which have in turn created countrywide shortages of basic commodities like fuel and medicine – and power outages of up to 23 hours per day.

It will also be the first election since the 2020 Beirut Port explosion that killed over 215 people and reinforced the public’s grievances over corruption and government mismanagement.

The electoral system was implemented by France during its occupation of Lebanon (1923−1946) and was modified more than once during the intervening years.

A major update was implemented following the Al-Taif agreement (1989) in Saudi Arabia, where feuding Lebanese warlords agreed to end the Lebanese Civil War of 1975-1990. All sides endorsed a plan to divide parliamentary seats equally between Muslims and Christians. After the end of the war, the first election in twenty years was held in 1992.

Amendments to the Election Law were introduced again in 2017 when the ‘preferential vote’ was introduced in a controversial attempt to redirect the election from a sectarian focus to relative percentages in the final tally.

Inside Lebanon, there are 3,967,507 registered voters, while the number of registered voters abroad has now reached 255,442. All citizens – 21 and above – can vote, providing they do not have criminal records.

Any candidate aged 25 and above is eligible for running in Lebanon’s elections as long as s/he does not hold a senior official rank or army position, has a clean criminal record, and is part of an electoral list that covers at least 40 percent of the seats of a major electoral district. 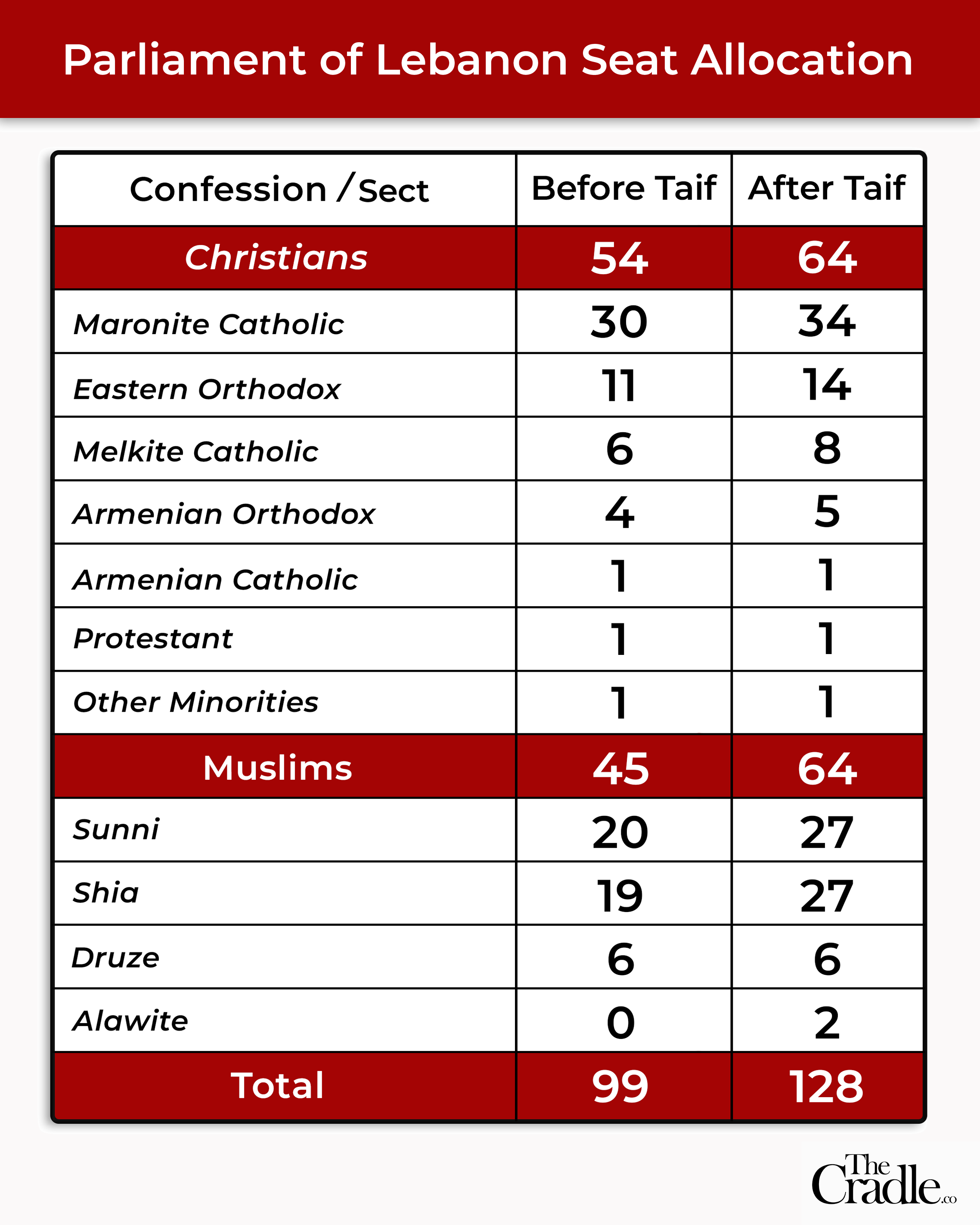 Typically, voting takes place on a Sunday from 7:00 am to 7:00 pm to elect 128 representatives in 15 electoral districts, which are distributed based on sect.

The districts are divided into 26 sub-districts, the purpose of which is to create equilibrium among the different sects. 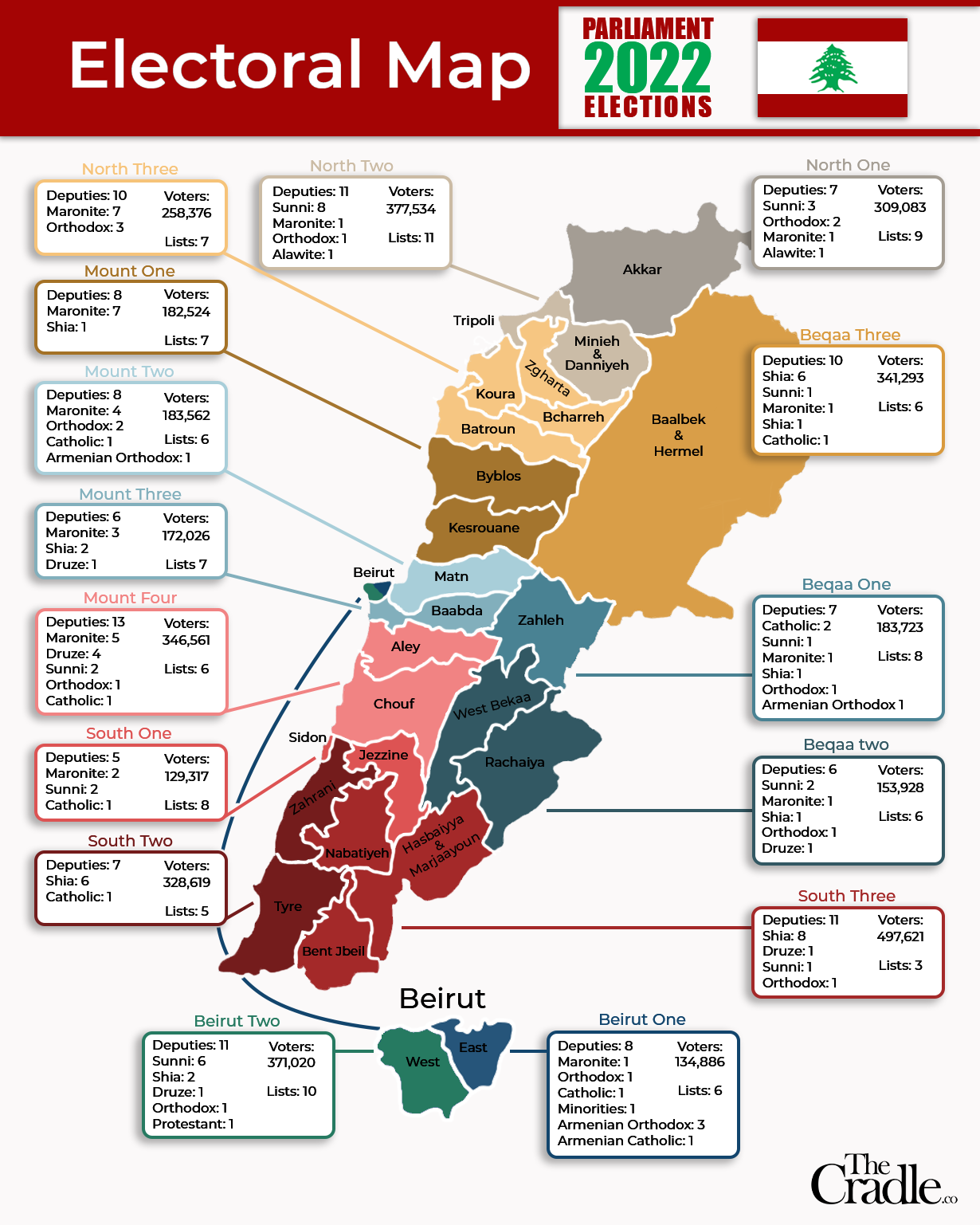 An example: Rami, Christian, from Jezzine, casts his vote

Rami, a 22-year-old Christian born in the southern Lebanese sub-district of Jezzine, is excited to participate in his first elections, hoping for change. According to the electoral law, he can vote in his sub-district only, which has three Christian deputies – two Maronites and one Catholic.

Jezzine is part of two sub-districts in the electoral district of ‘South One’ (see the map above). Sidon, the second sub-district, holds two Sunni seats, which makes the total seats in ‘South One’ five.

On 15 May, he wakes up early and drives to cast his first vote ever. He stops at the nearest polling station and hands in his ID.

In return, he is provided with a voting ballot which contains electoral lists according to his district (in our example there are only three lists).

Rami has to select one of the three lists that represent ‘South One’ and has an option to select one ‘preferential candidate.’ But his favored candidate must be a Christian from Jezzine; thus, the Sunnis who are part of the lists are blacked out on his ballot paper. 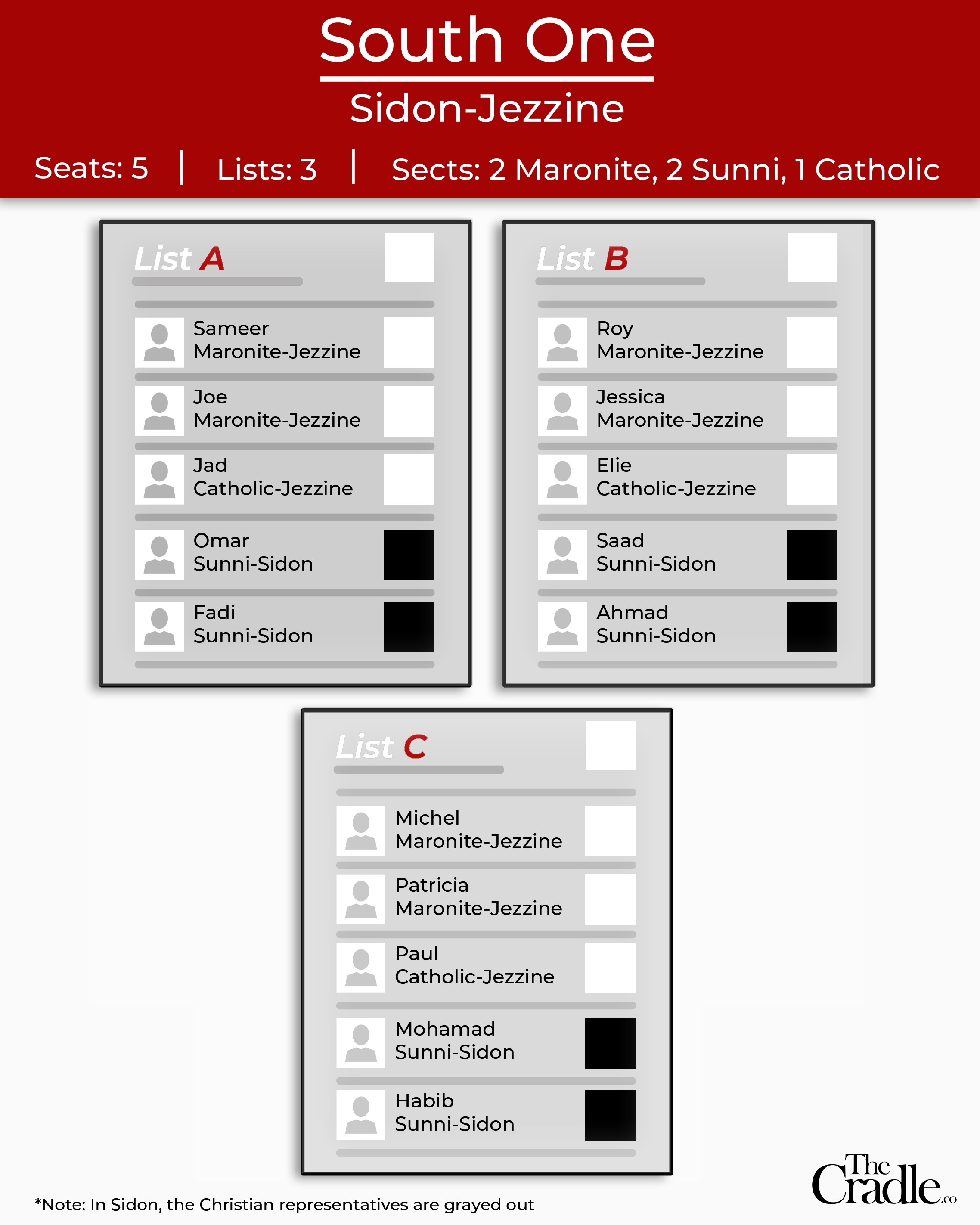 Before casting his vote, Rami is told that if he chooses more than one list or chooses a preferred candidate on a list other than the one he voted for, his vote will not be counted.

After slipping into the voting booth, behind closed curtains, Rami chooses List B, selects Jessica as his preferred candidate, and drops his vote into the ballot box. He drives back home to await news coverage of the results that evening. 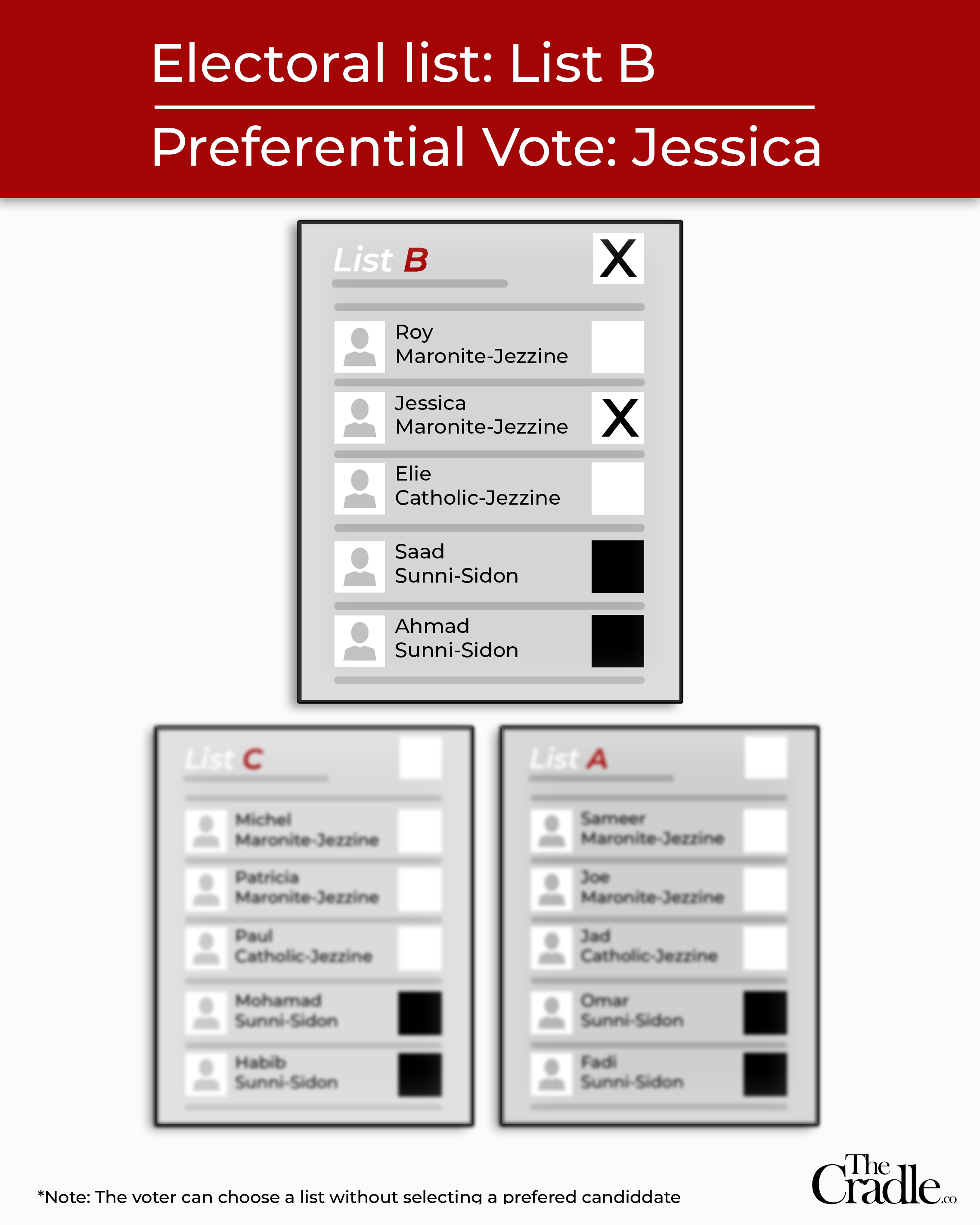 After 12 hours, at 7:00 pm, all polling stations close, and counting starts immediately.

In this scenario, a total of 60 thousand citizens voted in ‘South One’ across the three lists. Additionally, a total of 30 thousand preferential candidates were selected: 20,000 in Jezzine and 10,000 in Sidon.

To establish which candidate will become a parliamentary deputy, several steps are followed:

Step one: To find out which lists the deputies will be chosen from, a mathematical equation known as ‘electoral quotient I’ is performed which divides total votes by the number of seats up for grabs (60,000÷5 = 12,000). Lists with more votes than the result (12,000) qualify for the next stage. 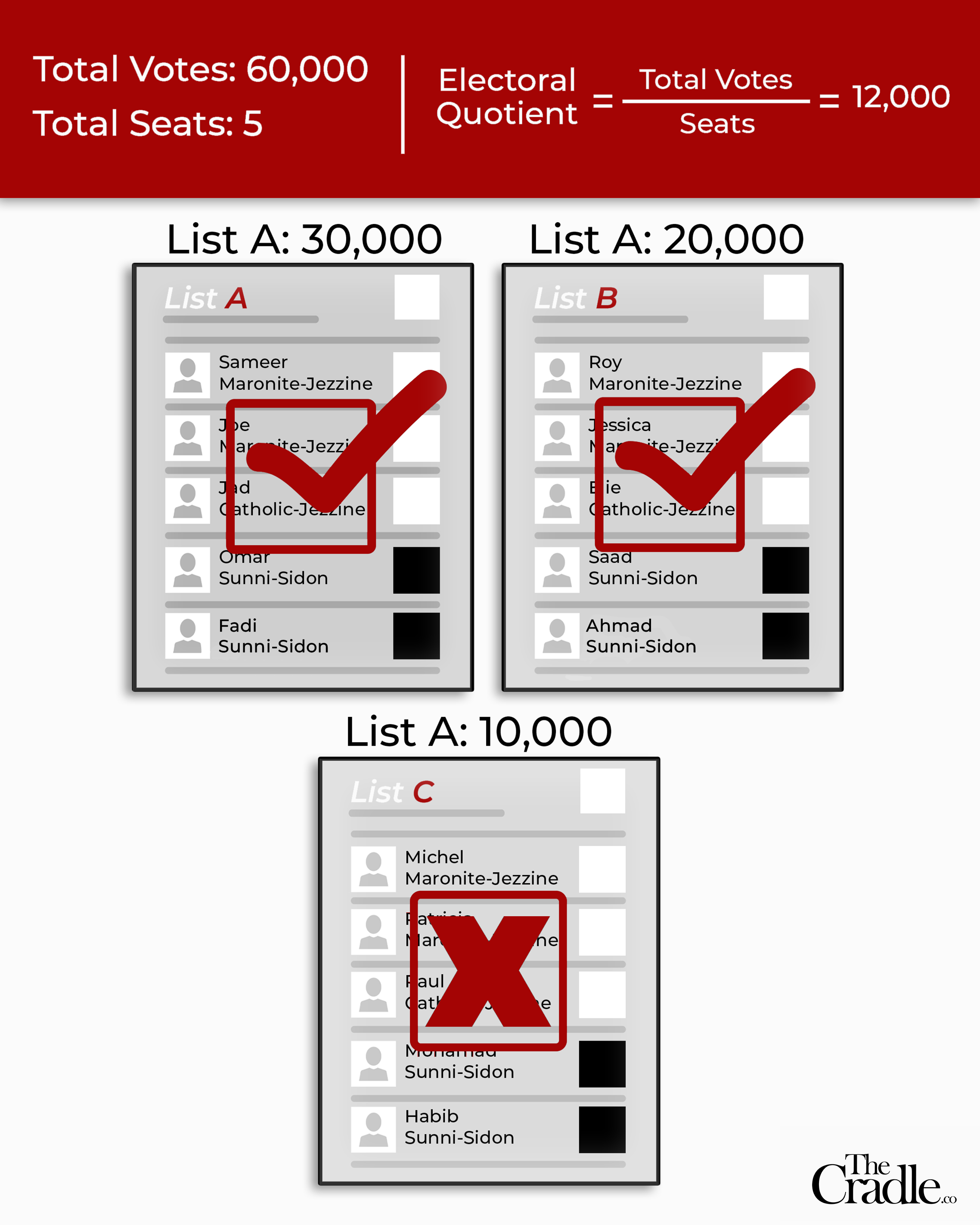 Left with two lists, the second step is to determine the number of seats for each. 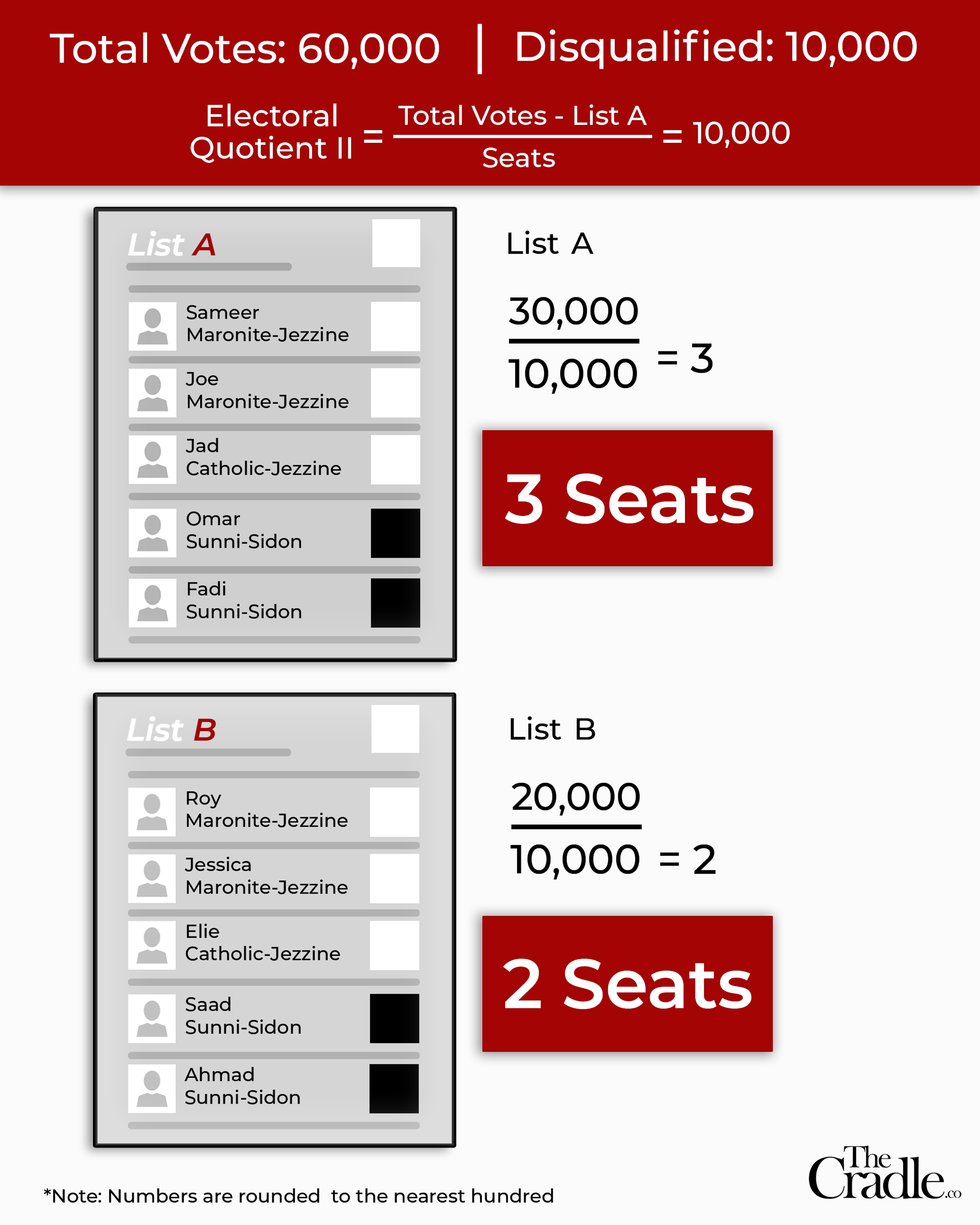 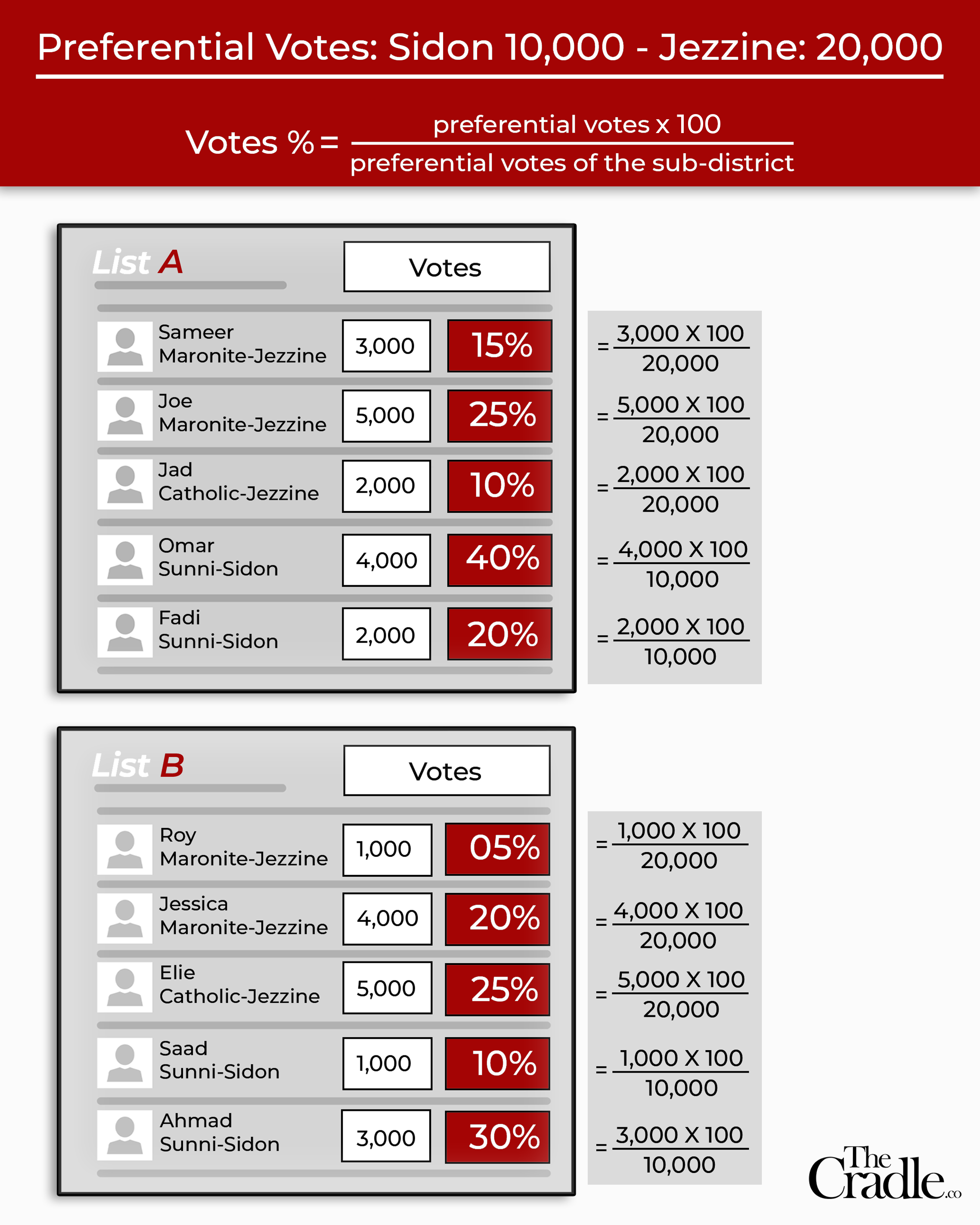 Step four: After all the calculations are completed, candidates are ranked by percentage – regardless of their list or sub-district. The candidate with the higher percentage wins first place with respect to his/her sect and the number of seats available.

The next day, Rami wakes up and quickly grabs his phone, but his battery is out and there is no electricity. He rushes to his grandmother’s old radio only to hear that his favorite candidate, Jessica, has lost. 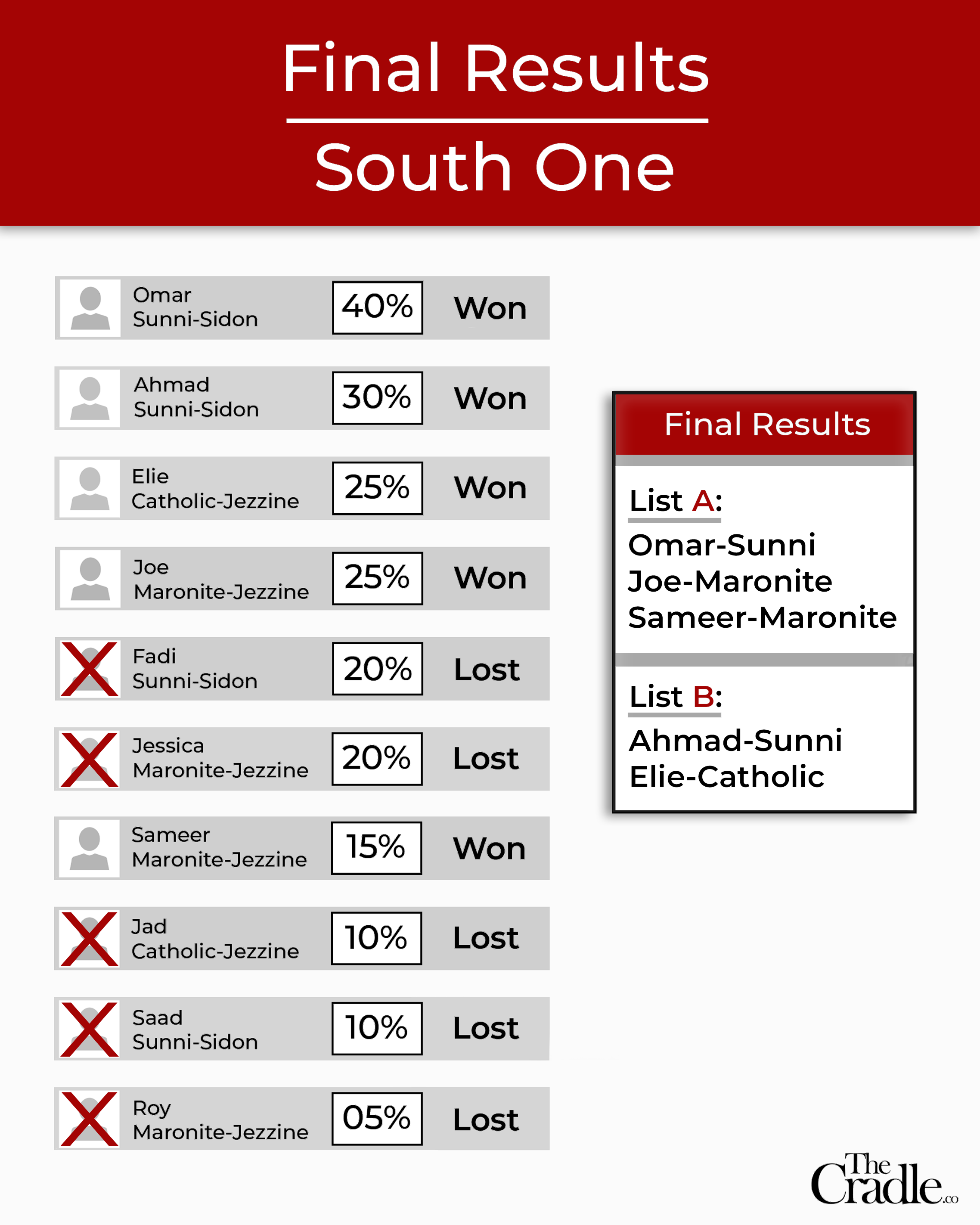 In the final result, List A won three seats: two Maronite and one Sunni, while List B won two seats: one Catholic and one Sunni.

Despite garnering more votes and a higher percentage than her opponent Sameer, Jessica’s list had only two available seats, and both were already taken. Thus, Sameer wins and becomes a deputy, while Jessica does not.

When do the results come in?

Unofficial results begin to leak on the same evening, while the official results from Lebanon’s Ministry of Interior are announced the following day. The results from all the districts are revealed together, but if there is an issue in a specific district, its specific results are postponed until the issue is resolved.

This year, 718 candidates, 15 percent of whom are females, are running in the elections and are distributed across 105 lists.

In the 2018 elections, 109 seats were taken by four main political party alliances.

Other western/Saudi-backed parties such as The Progressive Socialist, Azm Movement, and the Kataeb Party took most of the remaining seats.

The parliament was effectively divided into two main alliances: the Hezbollah-Amal-FPM Alliance with the majority of 74 seats, versus the pro-west/Gulf alliance of the Future party, LF and others.

The 2022 election will likely retain the same alliances except for one major exception. The largest Sunni bloc in Lebanon, the Future Movement, is not in play this time.

As an outcome of Saudi Arabia ending its support for Future Movement leader, Saad Hariri, the latter withdrew from political life and urged all his supporters to boycott this election.

This development leaves 20 parliamentary seats up for grabs, which all parties are vying to win.

There are 32 new registered lists that include independent candidates who now have an increased chance of winning, especially among Sunni supporters of Hariri.

Some of the new candidates are from the grassroots level, but many others are supported by an ever-rising number of western NGOs in the country since the Beirut Port Blast and the collapse of the lira.

Is the election fair?

Due to its complex and sectarian electoral system, the election is far from being fair.

Seats are district-bound; a candidate cannot win even if s/he gets more votes than other candidates, as we have seen in the illustrations above. An extreme real-life example of this was in the 2018 election when candidate Antoine Pano won a seat in the capital with a mere 539 votes from Beirut residents.

Given the intricate and stacked rules of Lebanon’s electoral process, it is nearly impossible for an independent candidate to win a parliamentary seat. A candidate must essentially be supported by a sect, party, or foreign country (or better, all) to be part of an electoral list – in order to even participate – and stand a chance of winning at all.

Rampant bribery and foreign interference are the main issues casting a shadow over these and previous Lebanese elections.

Bribes are openly and directly distributed to voters by candidates, either through cash or other means, such as gas coupons, food aid, and even job offers. Bribes vary too, depending on the district, on the voter’s family/tribe size, and on the influence the voter has on his or her sect.

Lebanese elections have always been marked by heavy foreign interference, and rely heavily on externally funded propaganda campaigns and extensive coffers to pay off voters. Since the Taif Agreement, Saudi Arabia, France, Iran, Syria, the UK, and the US have actively meddled in Lebanon to fulfill their geopolitical agendas – and during election season, that interest spikes.

The most visible interference in the 2022 election has been from Saudi Arabia, when Riyadh scrapped 30 years of support for the Future Movement at this critical time. Through their ambassador, Walid al-Bukhari, the Saudis have openly endorsed candidates, parties, and sects that oppose Hezbollah in order to maintain their influence not only in Lebanon, but also in the West Asian region.

Why these elections are important

The importance of the elections lies in Lebanon’s political geography and the power of parliament to shape or hinder the country’s direction.

One of the main reasons why the elections are so important to external states is Lebanon’s resistance movement Hezbollah.

Besides its military power, Hezbollah is a major regional player with considerable influence on several West Asian counties and on many Shias worldwide. Additionally, it has always rallied against western-Israeli-Gulf machinations in the region, including on various battlefields from Syria to Iraq to Yemen.

Moreover, the resistance movement has firmly and actively opposed the Saudi/Emirati-led coalition war against Yemen, a conflict which became the focal point of the Lebanon-Gulf diplomatic row that erupted in October 2021.

Thus, western states, Saudi Arabia and Israel seek to undermine Hezbollah’s power in various ways, with Lebanon’s election being an obvious means to achieve this.

*The Lebanese election law can be found here in Arabic.