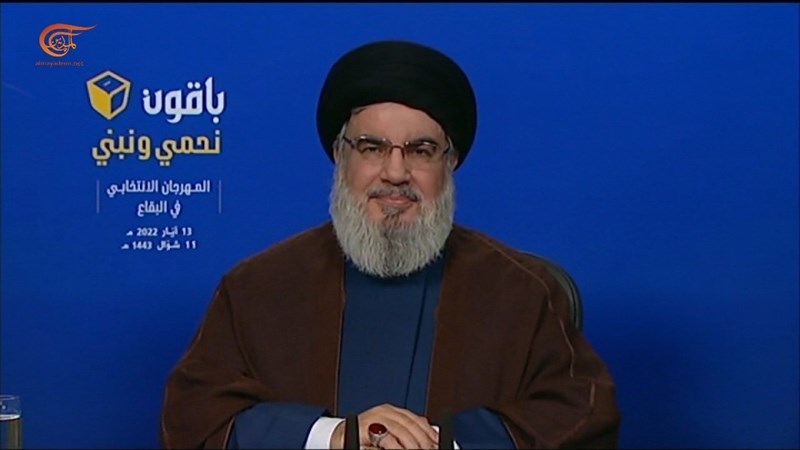 In a speech on 13 May during a rally in the Bekaa Valley, Secretary General of Hezbollah Sayyed Hassan Nasrallah urged supporters of the resistance to vote in Lebanon’s upcoming elections on 15 May.

“Casting your ballots on election day is a message to those conspiring against the resistance … and the future of the Lebanese people,” the Hezbollah chief said.

During the speech, Nasrallah commented on the electoral campaigns of some of Lebanon’s political parties, accusing them of making “their electoral lists in the US embassy,” in a veiled reference to western and Saudi-backed parties, such as the far-right Lebanese Forces (LF).

Nasrallah accused the US of helping its allies smuggle money out of Lebanon, of contributing to the collapse of the economy and to the inability of ordinary depositors to access their bank accounts. Nasrallah also accused the US of blocking investments in Lebanon.

The resistance leader thanked Syria and the Islamic Republic of Iran, while calling out “those who stood by Israel and offered it support and who today advocate for freedom and independence, especially the US and several Arab States [who are supporting the occupation] behind closed doors.”

He also thanked those from Bekaa who fought against ISIS militants on the borders of Lebanon and Syria, saying that some Lebanese political parties had supported ISIS and other militant groups.

Nasrallah commented on the killing of Palestinian journalist Shireen Abu Aqla, and said that the fact that she is a Christian is confirmation that Israel’s discriminatory ideology knows no bounds.

He also offered condolences to the families of the Syrian soldiers who were killed in missile attack by an unknown armed group in Aleppo on 13 May.

During an election rally held in the south of Lebanon on 9 May, Nasrallah said that public polling among the Lebanese population suggests that the economic crisis, inflation, corruption, and issues related to livelihood are of utmost importance to citizens, while Hezbollah’s weapons are low among public concerns.

The Hezbollah leader contrasted these concerns with those of political parties, whose campaign strategies centered on disarming the resistance rather than addressing people’s needs.

A day after the election rally, the Hezbollah leader gave another speech during a massive rally in Beirut’s southern suburbs, known as Dahiye.

Aerial views of the crowd showed that the presence of supporters extended well beyond the limits of the gates of Ashura Field, an outdoor venue used for political and religious events.