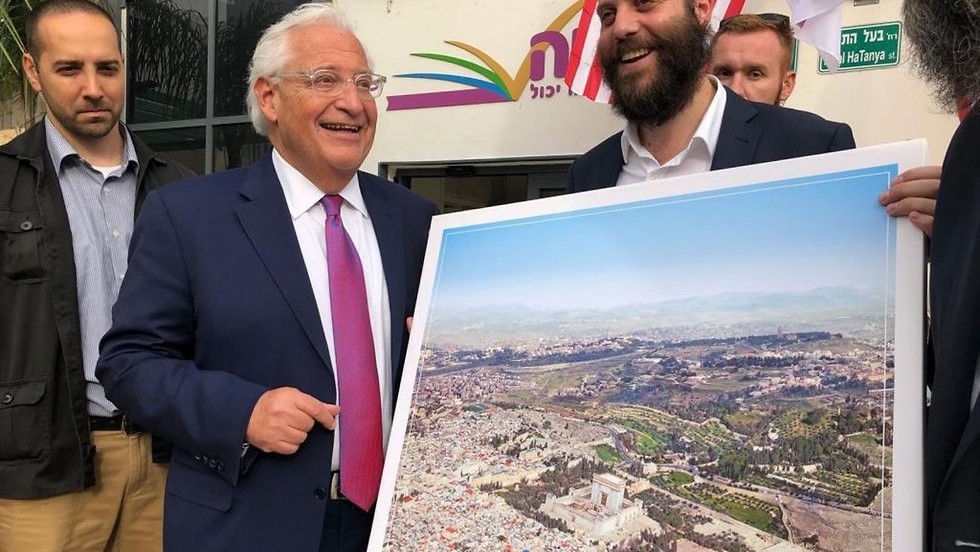 Former US ambassador to Israel David Friedman posing with a photo of the Al-Aqsa compound photoshopped to replace the holy mosques with a design of a third Jewish temple. (Photo credit: Yisrael Cohen/Kikar HaShabbat)

On 17 May, the leader of Jewish supremacist group Lahava issued a call to action to “demolish” Al-Aqsa Mosque for those participating in the upcoming flag march, set to take place on 28 May.

Lahava leader Bentzi Gopstein posted an image on his social media page depicting a bulldozer next to the Dome of the Rock mosque, one of the two mosques situated in Al-Aqsa compound.

“We will come to demolish the Dome of the Rock,” the caption of his post read.

Their alleged goal is to replace Al-Aqsa Mosque with a third Jewish temple, desecrating the third holiest site for Muslims across the world.

The Palestinian and regional resistance groups have consistently warned that any existential threat to Al-Aqsa Mosque would lead to a major battle that will quickly turn into a regional war.

On 30 April, Hamas leader Yahya Sinwar warned that the increased escalation from Israeli forces as well as extremist settlers would justify intensified retaliatory attacks from the resistance forces in Palestine and the region.

Such retaliatory operations by Palestinians in Tel Aviv, Ariel, and Elad have shaken the Israeli security establishment to its core.

In 2021, a flag march similar to the one being pushed for by Lahava led to escalations that triggered an 11-day war on Gaza by Israeli forces when Palestinian resistance factions launched strikes in retaliation for the Israeli escalation of attacks on Al-Aqsa Mosque and its worshipers.