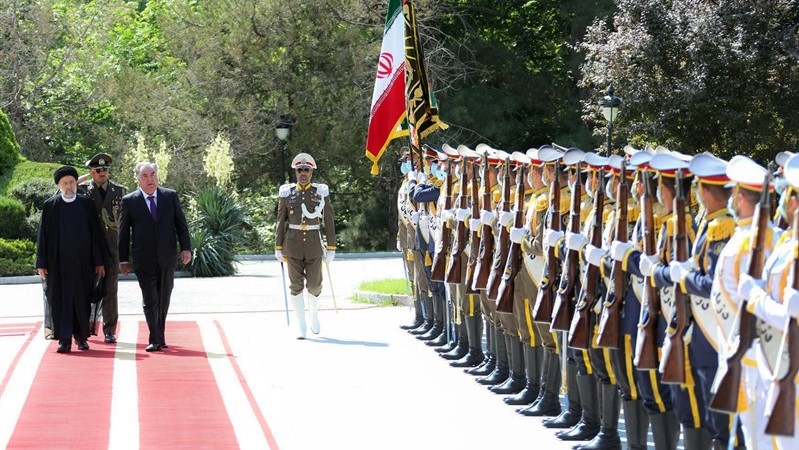 The president of Tajikistan, Emomali Rahmon, was received in Tehran on 30 May in a formal reception at the Sadabad Palace by Iranian President Sayyed Ebrahim Raisi.

President Rahmon was accompanied by a high-ranking delegation who will be present at a joint meeting between the presidents of the two countries. Several cooperation agreements were signed following the meeting.

During the joint press conference, President Raisi stated that the two countries agree on the need for all foreign occupying military forces to withdraw from West Asia.

“We believe that the presence of foreigners in the region has not and will not provide security in any way,” the Iranian president said.

On the issue of Afghanistan, which neighbors both countries, Raisi stated that Tehran and Dushanbe are working to ensure the formation of an inclusive government in Afghanistan that promotes stability and reconstruction.

“We believe that foreigners and agents affiliated to the global arrogant powers are nurturing the Daesh [terrorist] group in the region in pursuit of their own political goals and interests,” Raisi warned. “The presence of the US and NATO in Afghanistan for twenty years has yielded nothing other than war, bloodshed, and destruction. The future of Afghanistan must be decided by the people of the country itself.”

Iranian Foreign Minister Hossein Amir-Abdollahian stated that the visit by President Rahmon provides a “major impetus” for the growing of ties and cooperation between the two brotherly nations who have a shared history, culture, language, and more.

According to Tasnim News, trade between Iran and Tajikistan has increased by 489 percent in weight and by 463 percent in value compared to the previous year.

These numbers increased especially after the visit of President Raisi to the Tajik capital Dushanbe in September 2021, where Iran was welcomed as a full member to the Shanghai Cooperation Organization (SCO).

Raisi thanked the SCO member nations for allowing Iran’s ascension to the group while also expressing hope that the SCO will become “a driving force of global multilateralism.”

During a recent visit to Tajikistan on 17 May, Chief of Staff of the Iranian Armed Forces, Major General Mohammad Hossein Baqeri, inaugurated an Iranian factory manufacturing Ababil-2 military drones in the capital Dushanbe.

According to IRNA, Baqeri said that Iran is “in a position where, in addition to meeting our domestic needs, we can export military equipment to allied and friendly countries to help increase security and sustainable peace.”

Tajikistan has been grappling with the threat posed by thousands of Takfiri militants spread across its southern border with Afghanistan, ever since the Taliban assumed power in Kabul and the US forces pulled out in August last year.