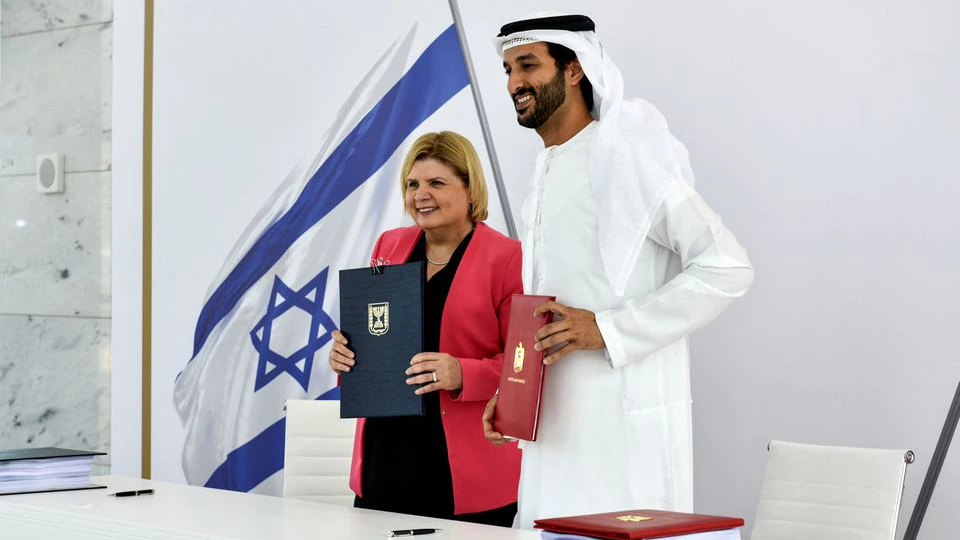 The UAE became the first Arab country to sign a free trade agreement with Israel on 31 May.

This deal reduces or eliminates tariffs on most goods, as part of the goal to raise bilateral trade to over $10 billion annually.

UAE Minister of Economy Abdulla bin Touq al-Marri and his Israeli counterpart Orna Barbivai met in Dubai where the signing of agreements was held.

The reduction or elimination of tariffs will affect 96 percent of goods traded between the two countries, such as food, medicine, jewelry, and industrial chemical products. The UAE and Israel hope to achieve the $10 billion bilateral trade benchmark within five years.

Israeli Prime Minister Naftali Bennett applauded the deal in a statement on Twitter:

“Israel & the UAE just signed a historic Free Trade Agreement – the first of this scope to be signed between Israel & an Arab state. This was the fastest FTA to be signed in Israel’s history.”

Israeli Foreign Minister Yair Lapid described the deal as a “historic and important moment for the state of Israel,” while UAE Minister of Trade Thani al-Zeyoudi referred to the deal as “a new chapter in the history of the Middle East.”

The Israeli economy minister stated this agreement will create a “solid foundation for the joint path” shared between the two countries.

Dorian Barak, president of the UAE-Israel Business Council, said this agreement will make it easier for Israeli companies to set up branch offices in the UAE. The Council estimates that 1,000 Israeli companies will work in the UAE directly or indirectly by the end of the year, due to the favorable conditions created by this deal.

“The domestic market does not represent the entirety of the opportunity. The opportunity is really setting up in Dubai, as many companies have, in order to target the broader region,” Barak told Reuters.

The UAE and Israel normalized ties in 2020 as part of the so-called Abraham Accords brokered by then US president Donald Trump.

The UAE, in particular, seeks such systems in order to protect itself from retaliatory strikes launched by the Yemeni armed forces and Ansarallah resistance movement. These attacks are aimed at pressuring Abu Dhabi into ending its involvement in the US-backed, Saudi-led aggression against Yemen.

The Yemeni armed forces and Ansarallah have struck deep into Emirati territory, including striking Abu Dhabi on the same day that Israeli President Isaac Herzog made a historical visit to the Gulf country. The strike was considered a dual message to both the Saudi-led coalition and Israel.

The UAE participated in an Israeli summit held in the occupied Negev desert in late March. The two-day diplomatic conference brought together the foreign ministers of Israel, Egypt, the United Arab Emirates (UAE), Bahrain, and Morocco. US Secretary of State Antony Blinken also attended the summit.