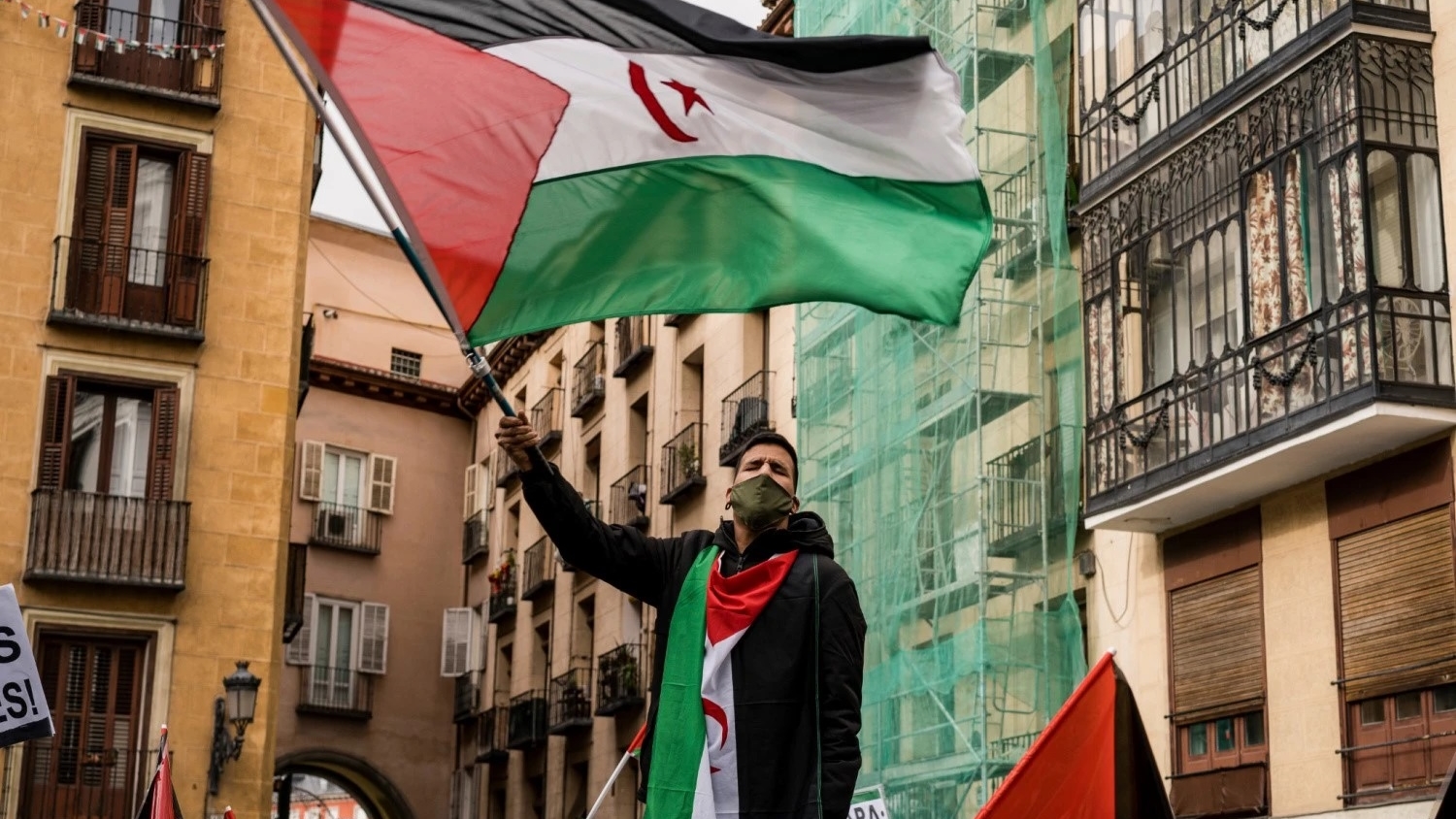 A protester waves the Sahrawi flag during a demonstration in front of the Spanish Ministry of Foreign Affairs, Madrid, 10 December, 2020 (Photo credit: Diego Radames for Sipa via AP Images)

Algeria suspended a 20-year-old cooperation treaty with Spain with immediate effect on 8 June, after Madrid altered its long-standing position on the disputed Western Sahara, a former Spanish colony, to back Morocco’s “autonomy project.”

Algiers called the decision a “violation of [Spain’s] legal, moral and political obligations” and said Madrid was abusing its role as an “administrating power” in the Western Sahara.

“[It is, therefore,] contributing directly to the degradation of the situation in the Western Sahara and the region”, the office of President Abdelmadjid Tebboune said.

As a result, trade and banking relations between the two countries have been frozen. The Algerian banking association has issued a statement informing banks that the import of goods and services from Spain was at an end.

Algeria is a major natural gas supplier to Spain and is expected to review prices for any new gas contracts with Spanish firms, a source familiar with the matter told Reuters.

Tebboune has previously said he would not end the contract over the diplomatic spat, while Spanish Foreign Minister José Manuel Albares said there was no indication that had changed.

The current gas contract with Spain is long-term, with prices well under the current market level, according to the unnamed source of Reuters.

Nonetheless, many are questioning how the EU will react to this breakdown in relations, as the majority of the union is already facing a severe energy crisis due to the ban imposed on Russian energy supplies.

The row between Algiers and Madrid worsened after Spanish Prime Minister Pedro Sanchez defended his foreign policy shift to support Rabat’s idea for the Western Sahara to be an “autonomous region” within Morocco, calling it the “most serious, realistic and credible proposal to solve this ongoing conflict.”

Appearing before parliament on 8 June, Sanchez abstained from commenting on the possibility of a spike in gas prices as a result of his decision.

Algeria, which supports the Polisario Front liberation movement, last year broke off diplomatic ties with Morocco over their hostile acts against the people of the Western Sahara and their normalization of ties with Israel.

Morocco controls 80 percent of the disputed region. The rest is held by the Polisario Front, which fought a 15-year war with Rabat after Spanish forces withdrew in 1975.

Morocco has offered limited autonomy to the enclave, but insists the phosphate and fisheries-rich region of the Western Sahara has to remain under its control.