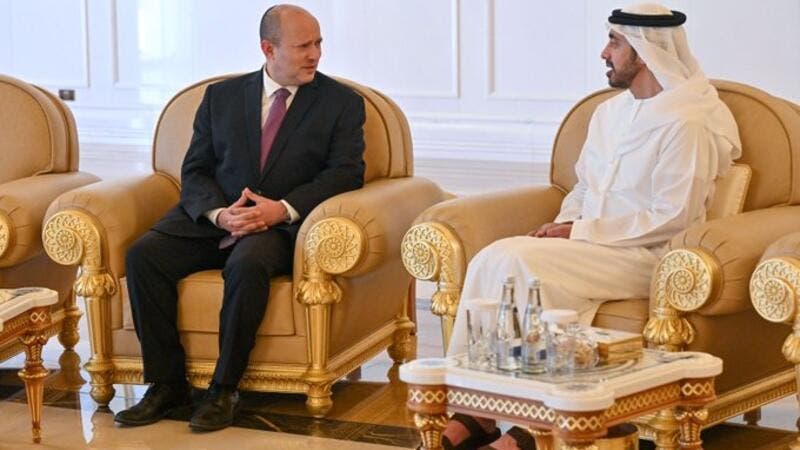 Israeli Prime Minister, Naftali Bennett, arrived in the UAE on 9 June on an unannounced visit, and was received by Emirati President Sheikh Mohammed bin Zayed (MbZ), with whom Bennett will hold a “special” meeting.

“I will express to the royal family my condolences and the condolences of the Israeli people following the death of the president, Sheikh Khalifa bin Zayed, who helped pave the way to a partnership between Israel and the UAE, a partnership that we are strengthening today,” Bennett said ahead of his arrival in Abu Dhabi.

“Today we will build another level onto the special bond forming between our nations, for the security and prosperity of both peoples,” the Israeli Prime Minister said upon his arrival in the Gulf country.

The expected talks, which will be held between Bennett, MbZ, and other senior Emirati officials, will reportedly revolve around “a set of regional issues,” including Iran.

“I welcome the decision of the Board of Governors of the International Atomic Energy Agency yesterday, which says clearly that Iran continues to deceive and to conceal nuclear activities,” Bennett said, referring to an IAEA board meeting during which Iran was reportedly accused of refusing to cooperate with the UN agency.

The Israeli Prime Minister’s visit to the UAE comes just one day after the Atomic Energy Organization of Iran (AEOI) announced that officials have shut down over 20 CCTV cameras belonging to the IAEA.

Video: The moment Iran cut off the IAEA cameras

The disconnected cameras were installed in Iran’s nuclear sites as a measure beyond the safeguards agreement reached with the IAEA.

“Iran has so far had extensive cooperation with the IAEA, but unfortunately the IAEA, without considering that this cooperation is due to Iran’s goodwill, not only did not appreciate it but also considered it Iran’s duty,” the AEOI statement reads.

“For this reason, the decision was made to stop the operation of the [Online Enrichment Monitor] enrichment surface line metering camera and the IAEA flow meter from today, which has been ordered by the relevant authorities.”

However, the Atomic Energy Organization of Iran has highlighted that 80 percent of the surveillance cameras set up by IAEA are within Iran’s obligations under the safeguards agreement and that they would continue operating.

Iran has expressed concern over a “politically compromised” IAEA, especially in light of the organization’s chief, Rafael Grossi, visiting Israel and meeting with Bennett earlier this month.